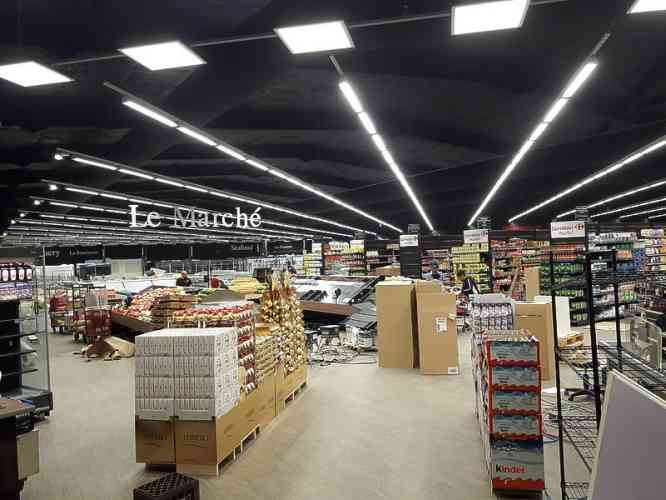 PHILIPSBURG–The wait is over for Carrefour Market Bush Road customers who have been waiting for the establishment to reopen its doors. The long-awaited reopening  will be held this Thursday, November 15, from 9:00am, just in time for Thanksgiving and the Christmas holiday season.

Carrefour Market management official Danny Ramchandani told The Daily Herald on Tuesday that 90 per cent of the supermarket’s operations will be ready for Thursday’s soft reopening. The facility is expected to be 100 per cent operational in about two weeks. An official opening ceremony will be planned for later.

“We look forward to getting back into action,” Ramchandani said. “All of our customers are super happy that we are coming back and the staff is enthusiastic.”

The supermarket will have many “amazing” in-store promotions for customers. Ramchandani said that once the systems have been tested and the kinks of reopening are ironed out, the establishment will resume its regular opening hours from 8:00am to 8:00pm, as of Friday.

Carrefour Market suffered two major disasters in the span of nine months with Hurricane Irma in September 2017 and a fire in June 2018. The store has been completely remodelled from scratch and boasts, amongst many other things, a new roof with an open concept and new flooring. All the items in the establishment such as the coolers and freezers have been replaced.

In addition to the spacious interior and wide assortment of products for which it is known, the reopened Carrefour Market will boast a wider fresh-produce section that stretches from the front all the way to the back of the establishment. The fresh-produce section will also feature a special organic section for persons who are looking for healthier options. The expansion is based on the growing demand for organic products.

The food court and the bakery sections were also expanded with a full bakery preparation section. Carrefour Market will be baking its own line of fresh bread and bakery products. Customers will still be able to get breads of other brands, but the establishment will have more breads baked fresh in house.

The store will also be reintroducing its customer reward cards about a month after reopening. Customers will be given bonus points because the company is cognizant that customers had points on their cards prior to Hurricane Irma, but as a result of the computer that stored the information being looted, the company was unable to retrieve this information after the hurricane.

Shortly after it reopened after Irma, Carrefour Market was destroyed by a fire that started in its back-office area. The fire is believed to have been electrically related.  The company has kept all of its workers during the months it has been closed, including the workers from Carrefour Market in Cole Bay, which is expected to reopen early next year.