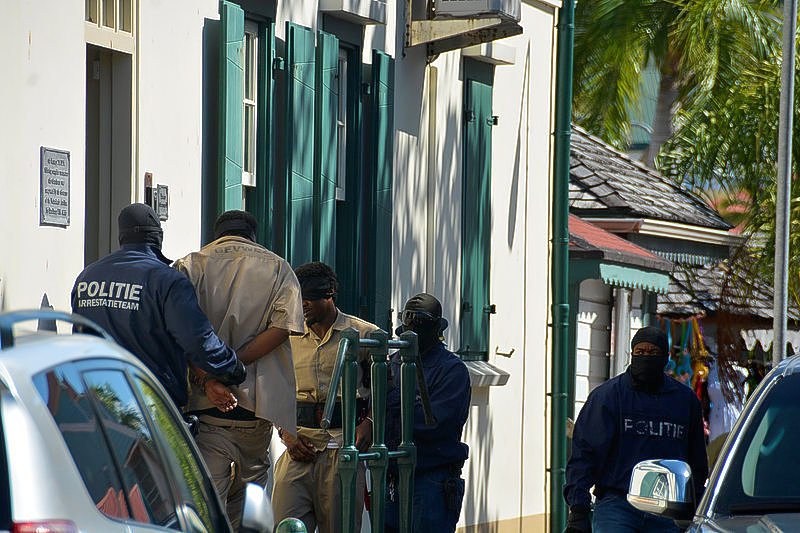 PHILIPSBURG–Alberto Dixin and Orlando Robinson were sentenced on Wednesday in the Court of First Instance for their involvement in the Sol gas station armed robbery in Cole Bay that resulted in a gas attendant being killed by Robinson.

The judge sentenced Robinson to 22 years in prison for aggravated manslaughter, extortion and accessory to illegal firearm possession.

Dixin was found guilty by the Court of committing a violent robbery that led to the victim’s death, extortion and accessory to illegal firearm possession. The Court sentenced him to 15 years.

The Prosecutor’s Office had requested 25 years for Robinson and 15 years for Dixin.

The attendant at Tackling gas station in Cole Bay suffered three shots to his abdomen and head in what seemed like an execution-style killing. The robber then turned the attendant on his stomach and searched his pants for money, it emerged from video-surveillance camera images that were shown in the Courtroom.

After the first robbery, the two men managed to escape in a black Hyundai i20. Just across Simpson Bay Lagoon, minutes after the first shooting took place, Sol Simpson Bay also was robbed in a similar fashion by one of the bandits involved in the Cole Bay robbery. The Simpson Bay attendant cooperated and handed over the cash to the robber. A customer who tried to pursue the getaway car was threatened at gunpoint and forced out of his car by the assailants, after which his car keys were taken.

The revolver that had been used in the robbery also was found inside the vehicle.

Gas station owner Ronald Tackling filed for $6,215 in damages. He paid the funeral cost of the attendant, who had been in his employment for four years. This request was rejected by the judge.

Dixin and Robinson have two days to appeal the verdict.