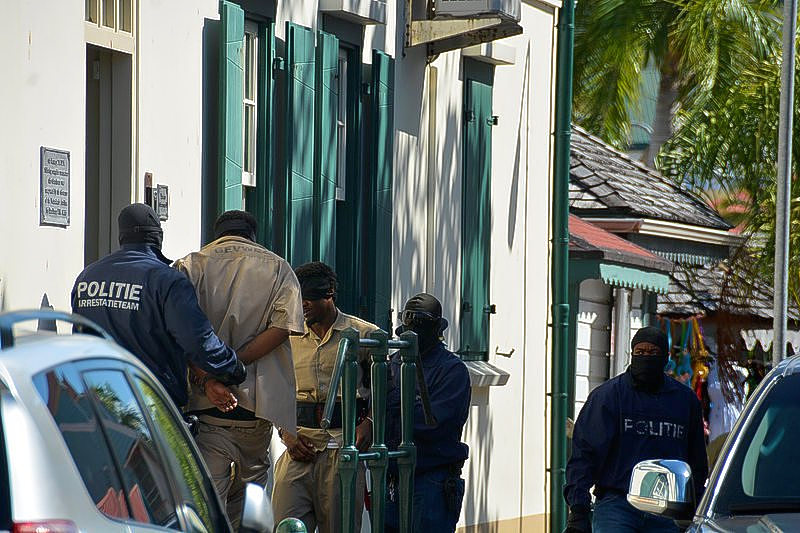 PHILIPSBURG–Runald Orlando Robinson (24) and Brendon Alberto Dixin (23) were sentenced Thursday by the Joint Court of Justice for their involvement in two armed robberies of Sol gas stations on November 30, 2015. The Court confirmed Robinson’s prison sentence of 22 years, and sentenced Dixin to four years in jail.

After the first robbery in Cole Bay, which resulted in a gas station attendant being killed by Robinson, the two men drove off. Just across Simpson Bay Lagoon, only minutes after the first shooting took place, Sol Simpson Bay also was robbed in a similar fashion.

The Joint Court confirmed Robinson’s conviction of aggravated manslaughter, extortion and illegal firearm possession, and upheld his 22-year prison term. The fact that Robinson is currently detained in Aruba did not deter the Joint Court from upholding the initial verdict.

The Court of First Instance had found Dixin also guilty of committing the violent robbery that led to the Cole Bay gas attendant’s death, and of extortion and of being an accessory to illegal firearm possession. The Court sentenced him to 15 years.

The Solicitor General had called upon the Joint Court to uphold the verdicts against both suspects, but the Court decided differently in Dixin’s case.

Contrary to the lesser Court, the Appeals Court acquitted Dixin of involvement in the Cole Bay robbery as the Court did not find it legally and convincingly proven that Dixin, who was sitting in his car, had the intention to commit an armed robbery and shoot the attendant.

It could only be proven that he had given Robinson a ride as “he had some errands to do,” as Dixin informed the Court. To that effect, Dixin had parked his vehicle near Orange Grove Shopping Centre, after which Robinson stepped out of the car.

“He just walked off and did his thing,” Dixin told the Court. “When I heard the shots I knew he did something that was not good,” he added. “In the end I…waited for him…When he was back in the vehicle I just drove off.”

The Joint Court reasoned that from this statement it could not be proven that Dixin had been an accessory or an accomplice to the shooting, as he had no intention to take somebody’s life.

He was also acquitted of illegal firearm possession as it was Robinson who carried the weapon that was used in the two robberies. After the second robbery, Robinson had stored the weapon in a passenger door compartment in Dixin’s car.

Even though Dixin had been aware of the firearm, and presumably also of the fact that it was loaded, this was not enough proof for a conviction of firearm-possession charges as it could not be proven that Dixin had the gun at his disposal.

The Court, however, took into account that Dixin had given his co-suspect, who shortly before had taken the life of a gas station attendant in a “coldblooded and merciless” manner, the opportunity to commit a second robbery.

A sum of US $1,370 was stolen in the first robbery. The second one yielded US $1,439 in different denominations. Gas station owner R.R. Tackling N.V. filed for US $6,215 in damages. He paid the funeral cost of the attendant, who had been in his employment for four years. The request met the same fate as in the initial case, and was rejected.