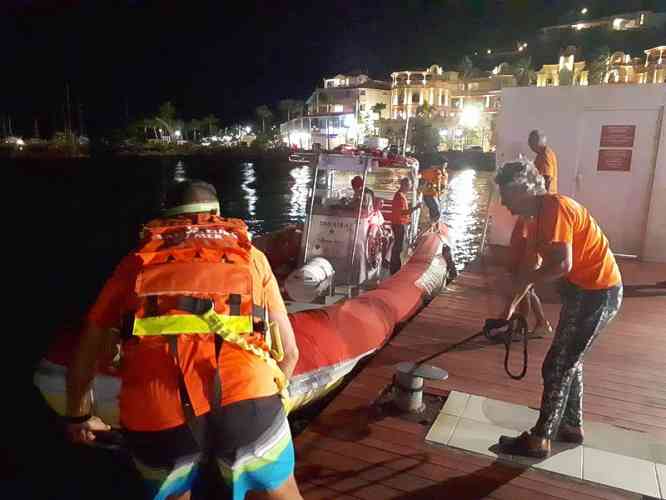 SNSM crew on “Rescue Star” returning to the dock after rescuing Kumakie Parris on Thursday night.

MARIGOT–A man who was plucked out of the sea by French-side sea rescue service SNSM on Thursday night after his fishing vessel sank in the Anguilla channel is thankful to be alive after spending more than seven hours in the water hoping for rescue.

SNSM was informed by surveillance centre CROSS at 2:15pm that the fishing vessel Integrity had sunk “around Anguilla” with one person on board. A crew of four SNSM volunteers on the semi-rigid inflatable Rescue Star headed for Anguilla, but initially without the position of the sunken boat. A few cushions were spotted in the water in the middle of the channel, but no evidence of a sinking boat.

It was learnt the individual, identified as Kumakie Parris, had managed to alert a friend by phone at 11:15am when his boat sank, and the friend then went out with his own boat to look for him. It was only after 1:30pm that the friend finally alerted the Anguilla fire department to launch the official emergency chain.

The Anguilla police had one last contact with the shipwrecked man around 1:45pm, confirming that he was in the water and still alive, but without being able to specify his exact position.

Major resources were then deployed: the Dutch Coast Guard on two Metal Sharks, which took on board two police officers and some Anguillian firemen; the Gendarmerie’s Nautical Brigade; private boats Funtime, Night Rider, and others; Rescue Star of SNSM St. Martin; as well as a DASH-8 aircraft which flew over the whole area making round trips.

Despite all the resources being deployed the missing man was still had not been located as night began to fall. Rescue Star re-fuelled at the Delta Petroleum dock and resumed the search with thermal binoculars, this time searching the area from Pointe Plum to Blowing Rock, from South to North.

Suddenly the man was spotted in the water in the beam of the flashlight and was hoisted on board. He is in good condition, with no visible wounds or injuries. CROSS was immediately informed at 7:40pm that he had been found

Parris explained that his engine had broken down, then a big wave broke on his boat. At that time, about 11:15am, he contacted his friend in Anguilla, put on a lifejacket (a decision that saved his life) and tried to pump his boat to empty it, when another big wave hit him on the beam and the boat capsized.

“He saw boats looking for him; he shouted, raised his arms; the plane passed over him; but no one saw him,” SNSM reported. “A small head between the waves is almost impossible to see. He had nothing to signal his presence; no whistle, no light, no reflective tape on his vest. His phone in a waterproof pocket no longer worked. He swam for hours trying to reach the coast of St. Martin.

“The crew gave him a phone to call his family who were ecstatic that he was alive.”

SNSM particularly thanked sponsor Delta Petroleum, which came out to refuel the Rescue Star after closing time, permitting the search to be resumed and the man saved. SNSM also thanked CROSS, the Dutch Coast Guard, Brigade Nautique, DASH-8 plane, and all the private boats involved in this international maritime rescue collaboration for their efforts.

SNSM advises sea-goers to always wear a life vest, in water sports and, ideally, equip it with a light, a whistle and reflective strips to have the maximum chance of detection if the worst happens – because miracles like the one last night happen very, very rarely!