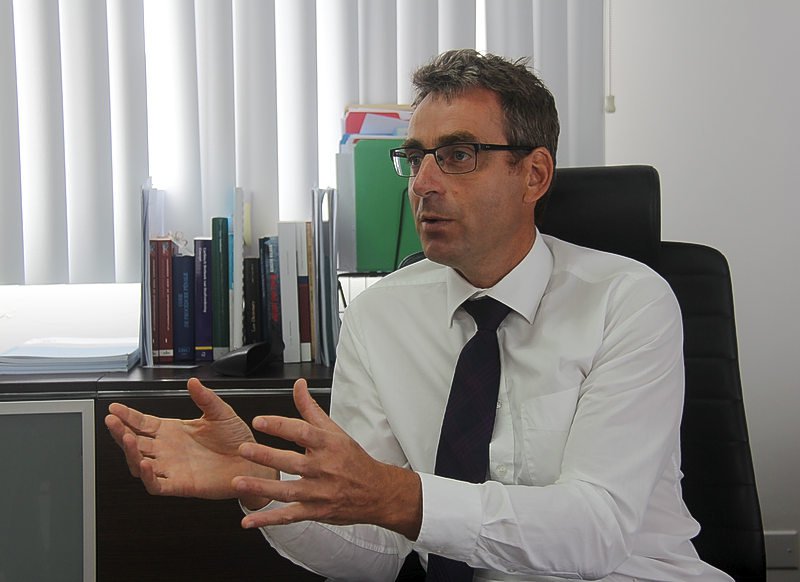 COLE BAY–St. Maarten has had a new Solicitor-General, Jan Spaans (50), since January 1. He represents the Prosecutor’s Office in appeal cases at the Joint Court of Justice, such as the well-known “Menam” and “Masbangu” cases. One of his other tasks is the establishment of an international legal aid centre in St. Maarten.

This happened, for instance, in the Menam case involving the death of Police Officer Gamali Benjamin during the daylight robbery of Oro Diamanté jewellery store in August 2015. “The main suspect in this case ‘Kilo Gotti’ was sentenced to 20 years, which the Prosecutor’s office considered too low,” Spaans said.

In other cases the appeal focusses more on the evidence, such as in the case of Kilo Gotti’s co-suspect, who initially was acquitted of being an accomplice. “We could not agree with an acquittal and filed for appeal,” Spaans explained.

“Appeal cases may also be of a more principal nature, such as a case which will be presented to the Joint Court of Justice to provide an answer on the legal liability of captains and vessel owners in case of an accident.”

The Solicitor-General’s Office feels strongly about the acquittals in the Masbangu case concerning the selling and buying of votes in the September 2010 parliamentary election. “This case is a cardinal point for us. If we do not get convictions in a case with such strong evidence we’d better use our capacity within the Prosecutor’s Office and the police for other cases. If the appeal does not lead to a conviction we have nothing to show for our efforts,” said Spaans.

However, the Prosecutor’s Office does not want to give the impression that if the Appeals Court’s ruling does not go in its favour alleged cases of election fraud will no longer be investigated.

Spaans has a career in the judiciary in the Netherlands which started in 1998. He has been a legal secretary and worked at the scientific bureau of the High Court in The Hague. Before moving to St. Maarten he was a Prosecutor with the Courts in Dordrecht and in Rotterdam, where he focussed on organised crime and international legal aid.

One of his tasks in St. Maarten is to develop the establishment of international legal aid centre IRC Carib to coordinate the handling of requests for international legal aid in the Dutch Caribbean. “Such requests include extraditions, but also assistance in criminal investigations such as placing taps on telephones or observations, and administrative assistance,” Spaans explained.

The centre, which is to become operational in January 2018, will also handle requests of persons who want to sit out the remainder of their prison sentence here.

Spaans said that as a Solicitor General he is focussed on the legal aspects of his job. Prosecutor’s Office policy is a matter of the Attorney-General in Curaçao and the Chief Prosecutor.

The Prosecutor’s Office, which is currently located in the Vineyard Building in Philipsburg, and the office of the Solicitor-General in Puerto del Sol in Cole Bay, will both relocate by mid-year to a joint location at the former branch of RBC Royal Bank at Emmaplein.

Similar to the Netherlands, the Prosecutor’s Office in St. Maarten is also confronted with a lack in capacity, leading to “selection and prioritising” in the investigation of cases, Spaans said. “Capacity problems are not unique. You have to look at where you can best use your capacity. In that respect every granted request for legal aid goes at the expense of your own capacity.”

Spaans said he is concerned about the “intensity” of violence on the island and the apparent ease with which persons resort to violence. “That is shocking. It takes up a lot of capacity to try and curb violence. We at the Prosecutor’s Office are at the end of the chain; other partners must also do their share. The Prosecutor’s Office cannot solve this on its own,” said Spaans in pleading for an integrated approach.