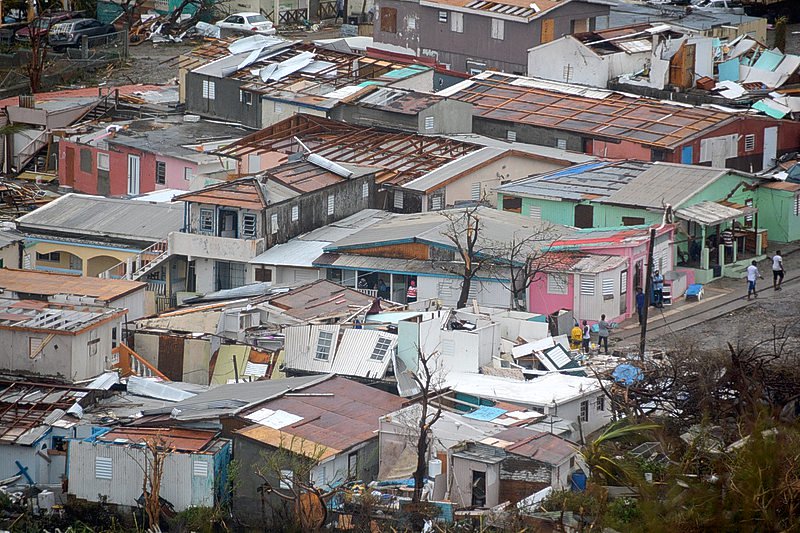 PHILIPSBURG–An estimated 5,000 homes would have to be constructed as a result of the destruction to homes caused by Hurricane Irma and to put an end to “shanty towns” that currently exist in the country.

This was part of the information provided to Members of Parliament (MPs) during a meeting of the Central Committee of Parliament on the National Recovery Plan (NRP) on Thursday.
Dennis Richardson, in his capacity as a member of the work group that compiled the NRP, told MPs that the 5,000 homes are not needed primarily due to the destruction caused by Irma, but are also needed to put an end to the “bad” housing conditions and shanty towns that exist.
It is proposed that construction be done differently. Rather than ordering pre-constructed homes and erecting them in one specific area, to put an end to the “bad housing conditions” on the island, “it’s better to spread the building of these homes in different areas so we don’t get into any form of ghetto forming.”
It is also recommended that many of the homes to be constructed be done in such a manner that they can be purchased by persons. Richardson said there are persons who do not qualify for bank loans and they should be able to benefit from this, which he said will help to reduce the social impact of the hurricane in the country.
He said the construction of the homes is necessary as something is needed for persons who have been displaced by the hurricane. Since St. Maarten’s financial carrying capacity is limited, funds are needed for this initiative, whether through public/private partnerships; accessing funds from abroad via the Dutch Kingdom; the European Union (EU) or through some other means, some “extra effort is needed to help carry us through this difficult phase of the recovery effort.”
Richardson said the “worst effects” of the hurricane in the coming period will be unemployment. “The amount of inventory that has been destroyed is so great that we fear that if the economy does not rebound quickly, unemployment will grow,” Richardson said. “I do not know figures now. We cannot give them. I believe last time we were informed about it, no requests were submitted to lay off people from different businesses, but we expect those requests to come in because if businesses do not generate income they will have to lay off people. That’s why recommendations for short-term actions should be executed a soon as possible.”

Economic recovery
Richardson said one of the focus points of the NRP is the economic recovery of the country. The NRP is “a common sense report,” which contains common sense recommendations simply because we know that if the economy can rebound quickly it will mitigate many of the other problems in the community.”
He said if the economy recovers quickly, unemployment will be low and income will be generated, which government can use for the further recovery of the country. “If that happens, it has a multiplying effect on different parts of the community and creates a possibility for us to move ahead faster. It also creates the possibility for us to limit the damage to our market share. The longer we stay out of the market, given the competition in the region, the more possibilities we will have of losing more of our market share. So the economic recovery is, for us, one that we recommend that a lot of effort, time and money be put into.”
One of the recommendations from private sector stakeholders is to make it possible for them to receive soft loans/financing to rebuild their operations. “This way, they would recover quicker than if they have to pay commercial interest rates on loans. This is one of the recommendations as well in the report.”
Another recommendation is to focus on the return of the cruise industry because cruise vessels are equipped with their own inventory. “You won’t need hotel rooms. Eighty per cent of our hotel inventory has been damaged and will be out of commission for a year or two years unless we can find the money to help them recover much quicker. As a result of that, a lot of effort was made to have cruise ships back by November 11, but as you know, and this leads to my disappointment, that has been pushed back.”
Richardson also spoke about the financial impact of the hurricane on the country’s budget. The NRP recommends that government make use of an article in the law on financial supervision, which would allow it to have a deficit, which would most likely be for 2017, 2018 and 2019. “That solves the legal issue of budget deficit, but it doesn’t solve loss of income by itself.”
It is also recommended that government put in place, an office of recovery and reconstruction to help guide the implementation of the country’s recovery efforts.
He also highlighted the damage assessment for the country, which NRP estimated at US $1.8 billion. The figure is based on information gathered by the work group team as well as based on the models prepared by the Central Bank of Curaçao and St. Maarten (CBCS).
CBCS had developed three damage assessment scenarios: low end of US $1.2 billion, a high end of US $4 billion and mid-level of US $2.5 billion. “Based on what we could gather in the short period of time, we decided to put the estimate at US $1.8 billion just above the lowest assessment by the Central Bank and just below the middle scenario assessment of the Central Bank.
Furthermore, based on conversations with insurance companies, we came to the conclusion that a gap will exist of about US $815 million as far as is necessary to do the repairs and reconstruction after the hurricane and to do improvements on the product as recommended in our report.”
This, Richardson said, is a tremendous amount of money that would be needed, which the budget alone cannot carry. “We are dependent on funds flowing to us to be able to carry out that programme. If those funds don’t come, most naturally the process of recovery will be slowed and the structural disturbance of the budget of St. Maarten will be over many years.”
At this stage, he said the work group is unable to present concrete projects worked out in details with organisations, but he noted that this can be the next phase of the work for the work group. “In this phase, the recommendations in the report are more guiding principles to help us overcome the problem that will face us in the coming months,” he said.
The vision of the NRP in creating the report was to create a better and stronger St. Maarten, which has been coined BBB (Build Back Better). “Build back better does not only mean physically, but also in strengthening of organisations and products where necessary.” Consultations with stakeholders were of major importance in preparing the document.