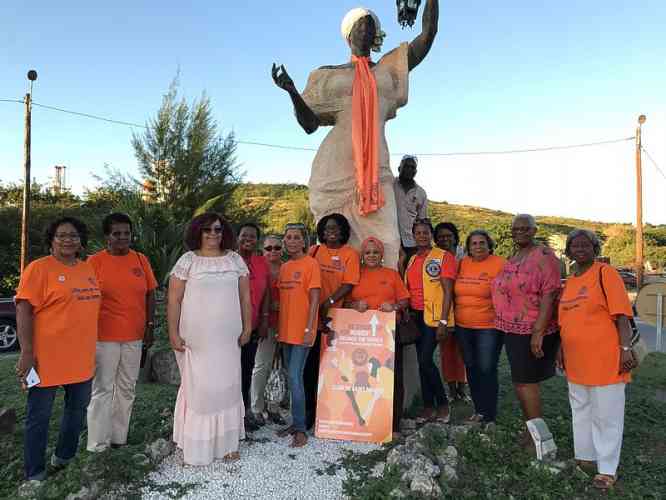 Soroptimist Club members and other supporters at the Lady Liberty statue in Agrément where a symbolic orange scarf was draped around her neck during the observance of International Day for the Elimination of Violence Against Women on Friday. Story on page . (Robert Luckock photo)

MARIGOT– Soroptimist Club of St. Martin members observed International Day for the Elimination of Violence Against Women on Friday by unveiling a painting by Claudio Arnell at the standing monument in the garden of Hotel de la Collectivité, erected last year as a symbol in memory of victims of violence.

The United Nations (UN) General Assembly designated November 25 as International Day for the Elimination of Violence Against Women to raise awareness that women around the world are subject to rape, domestic violence and other forms of violence.

The brief ceremony was attended by Secretary-General of the Préfecture Michaël Dore, who gave a short address. Each year, Soroptimist International mobilises some 76,000 women from 132 countries to work for this universal cause.

President of St. Martin’s Soroptimist Club, Annette Philips said the local club raises awareness about the cause with activities, events and discussions in schools over 16 days of activism up to the International Day of Human Rights on December 10.

“Violence against women and girls is not only about the physical violence, but also about economic, social, financial and psychological abuse,” said Philips. “This carries heavy consequences for those affected and prevention is essential.”

A film about women in professional society will be shown in two classes at the Lycée followed by a debate.

In addition, the Chamber of Commerce CCISM will be showing the film “Une Femme d’ Exception” (An Exceptional Woman) starring British actress Felicity Jones as Ruth Bader Ginsburg, on December 10 at 7:00pm.  Admission is 10 euros. A debate will take place after the film.

This is the seventh consecutive year that L’Union Française du Soroptimist International is showing films about women’s causes, discrimination or violence against women.

A second symbolic gesture took place at the statue on the Agrément roundabout where an orange scarf was draped around the neck of Lady Liberty.