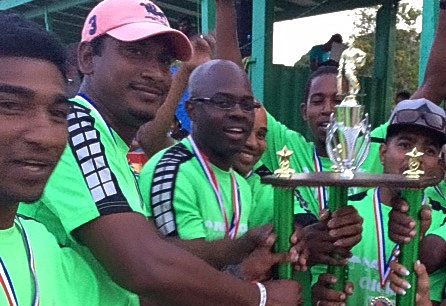 Having won the 40 overs finals against NAGICO last month, Spartanz are favourites to win again.

But the insurance company team will not go down without a fight, it has called up its overseas players for this match only. The overseas players have not played a match in this tournament but expect to see Nkummer Bonnor and Jahmal Hamilton for this match. Bonnor who is from Jamaica is the Leeward Islands Hurricanes Captain. He was also a member of the

St. Maarten National team for the Leeward Islands 50 overs tournament in St. Kitts, last month where he scored 150 runs in six innings with a top score of 70 off 77 balls.

Although, he is not known as the ideal Twenty20 ball beater, his organised batting technique should be enough for him to play the anchor role in a batting line-up which lacks confidence.

On the other hand, Hamilton is well suited for Twenty20 cricket because of his adventurous stroke play. Hamilton; nevertheless, has never made any significant runs for his adopted local team but will be hoping to place some value on his investment in this crucial finals.

Those are the two headliners for NAGICO as they look for revenge over their arch-rival. It’s Twenty20 cricket; therefore, the aggressive Stephen Evans and Captain Romain Doodnauth are the go-to men when a team has only 120 legal balls to face. A quick-fire innings from one of them should help the team compile a good score.

Spartanz too have called up their star players. West Indies U19 championship-winning-batsman Keacy Carty and the ever promising Sherwin Peters have been summoned home from Leeward Islands Hurricanes training camp in St. Kitts.

Carty stroked a well-crafted 114 in the 40 overs finals to help Spartanz win the championship trophy. His task again in this finals would be to bat all 20 overs while the enforcers in Peters, Damien Williams and Captain Kenroy David decorate the score books with fours and sixes.

When these two teams met in the preliminary round, Spartanz crawled to 120 for six, to which Doodnauth responded with a blistering 55 off 40 balls (5×4, 3×6) to register the win with more than two overs to spare. The win in the preliminary round is nothing to celebrate because Doodnauth’s team won the preliminary match in the 40 overs tournament but lost in the final. He and his team will be hoping that that sequence is broken on Sunday.

Moreland Le Blanc, the off-spinner has emerged as the bowler for Spartanz to strangle the opposition batsmen in the first six overs. His subtle change of pace and consistent line and length have caused batsmen much difficulty. He will once again have to pull out a bag of tricks to contain the batsmen.

Bonnor, the leg spinner could be the best bowler for his team because of him being an unknown factor to most of the opposition batsmen and also he generally has very good control while bowling.

The finals begin at 2:00pm sharp. Before the finals, Masters Cricket Club and Future Champs will play a practice match which starts at 10:00am.

Cricket lovers will be entertained by local music and a variety of Caribbean food booths will be opened at the ground.