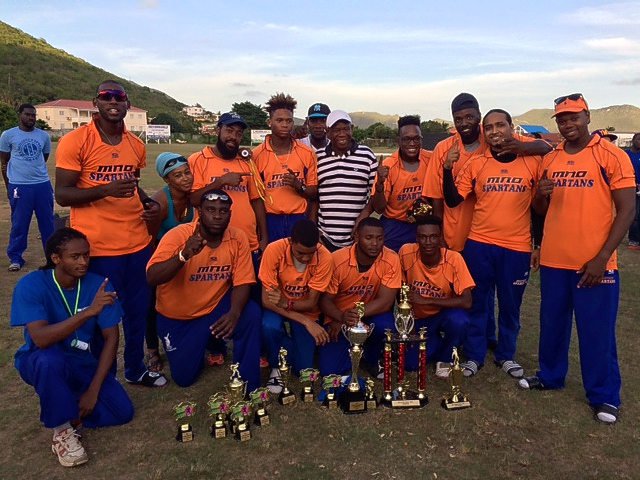 David who displayed a man of the match bowling performance finished with outstanding figures of four for 15 in four overs. Khan was equally tight without taking a wicket to finish with 4-0-12-0. While Khan delivered 13 dot balls, David produced 11 dot balls.
Khan bowled all his four overs on a trot in tandem with David and Daryl Doram and quite astonishingly only one four came in that seven-over period, no one four nor six was hit off of Khan’s bowling spell.
David deceived Sheldon Le Blanc who score 33 off 38 balls with two fours and two sixes with a slower ball outside off stump to break a promising 65 second-wicket partnership.
The match was hyped up with the inclusion of Leeward Islands Hurricanes Captain Nkummer Bonnor who is originally from Jamaica and Leeward Islands Hurricanes wicket keeper batsman Jahmar Hamilton from Anguilla in the line up for NAGICO. David; nevertheless, knocked out the stumps of both batsmen in spectacularly fashion: fast, straight and unplayable yorkers. He also bowled down Lionel Ritchie with a similar delivery.
NAGICO finished on 123 for eight and six of their batsmen had their stumps uprooted. It was the sight of flying stumps and the Spartanz players running widely in celebration that triggered an uproar in the crowd.
The bowling figures of the other wicket takers were 4-0-27-2 for Doram and 4-0-44-2 for Sherwin Peters.
The Spartanz’ total was set up by West Indies U19 man of the match in the ICC U19 finals  Keacy Carty with 53 off 46 balls (7×4) and Leeward Islands Hurricanes opening batsman Peters with 48 off 36 balls (4×4, 1×6). While the two were together at the crease, the Spartanz looked set for a projected score of 170 plus but Danga Farrell (4-0-19-0) in particular, helped pull up the hand brakes on the speeding train.
Damien Williams though, added the much needed last-overs burst with 30 off 21 balls (1×4, 3×6). His innings was important in getting his team to a respectable total as seven wickets fell for just 19 runs in the end.
The wicket takers for the losers were Lionel Ritchie 3-0-15-2, Bonnor 4-0-26-2, Colin Hamer 4-0-37-2 and Marlon Brutus 3-0-32-1.
At the presentation, with KFC representative Ericson Joseph in attendance, Damien Williams was handed the trophy for the most runs, Rasheed Pirkham collected the trophies for the most wickets and Romain Doodnauth was voted the MVP.