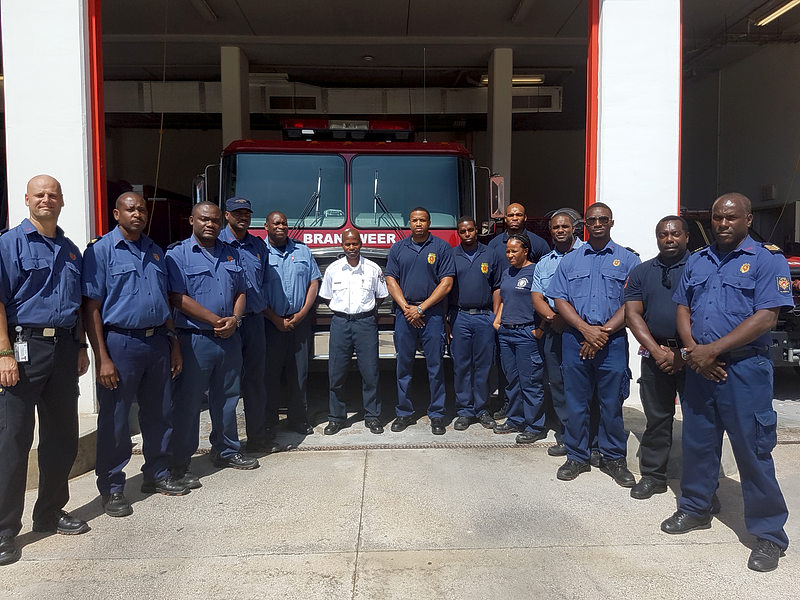 CAY HILL–Most drivers adhere to the road rules when they hear a siren; they pull over to allow safe passage of the emergency vehicle, be it an ambulance, police car or a fire truck. But what about the driver of the emergency vehicle? What protocol should he or she follow? This is exactly what an elite group of fire-fighters are learning in a dual course.

The 11-week course being delivered to the dozen fire-fighters by certified trainer Assistant Shift Leader Glenn Macnach covers driving safely with sirens and pump operations. Macnach took the course together with fire personnel of the Caribbean Netherlands (Bonaire, St. Eustatius and Saba) several months ago and is now equipped to deliver the same to his fellow fire-fighters, from both the Fire Department and Princess Juliana International Airport SXM. One fire-fighter taking the course is from Saba.

The driving safety course is the same that was administered to fire-fighters in the Netherlands. By law, all fire-fighters throughout the Dutch Kingdom must have the same training and on par skills. This specific driver’s training was implemented in the European part of the Kingdom in 2010.

The training seeks to equip trainees with the skills to drive at high speeds safely for themselves, their crew and others on the road. In the past, fire truck drivers were only required to have a “C” licence, but that changed when the new system was implemented for the Kingdom.

Fire Department Repression Section Head Nico van Zand told The Daily Herald the course had been developed to prevent accidents as much as possible and to safeguard personnel and other road users. It comprises two online theoretical tests and one practical exam. The online theoretical tests are in Dutch and are exactly the same tests given to fire-fighters elsewhere in the Kingdom.

One of the outstanding and commendable results of the course so far is the local batch of fire-fighters, who have received high grades for the online tests, a fact of which Macnach is very proud. All participants passed the tests. He said the results had not been as good when the same tests were administered in the Caribbean Netherlands in the past.

Dutch is always highlighted as a challenge for people in St. Maarten, but this course has shown there are outstanding examples where the language is mastered by professionals.

The second part of the dual course is certification for pump operator. Macnach explained that this posting in the fire response team requires the assignee to know how to operate the pump properly and accurately, to calculate the amount of water and pressure needed. “The pump operator is basically the eye of the captain,” he said.

The course is budget-neutral, as the trainer is from within the Fire Department and the use of the Airport for the practical training is based on the working relationship between the two fire departments.