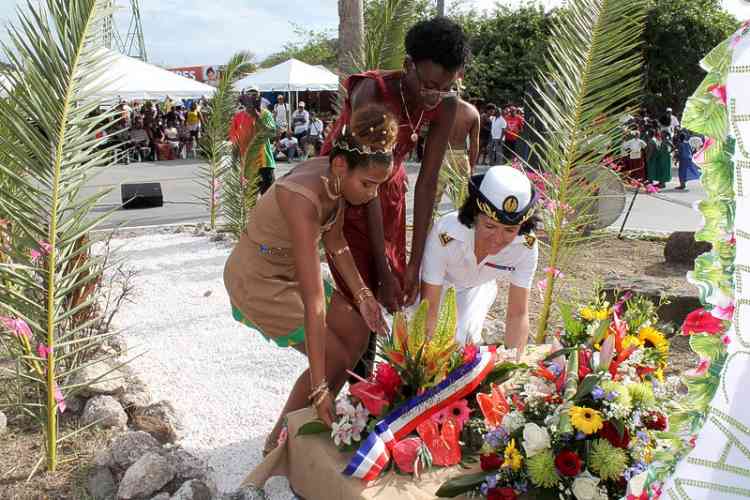 Préfète Sylvie Feucher laid a wreath at the foot of Lady Liberty in memory of victims of slavery. (Robert Luckock photo)

MARIGOT–The 171st anniversary of the Abolition of Slavery was commemorated at the Agrément roundabout on Tuesday, May 28 being the new date set by ministerial decree for the end of slavery in St. Martin. The commemoration was previously held on May 27.

It was fitting that Lady Liberty, decorated for the occasion by Janine Mingau, was holding a new lantern installed by the metal work company Faut Le Fer last Friday. For that occasion, a class from Hervé Williams School sang two songs and Lycée students read a poem in four languages.

Dutch-side Deputy Prime Minister Wycliffe Smith in charge of Youth, Education, Sports and Cultural Affairs was among the elected officials attending the event.

Members of the Youth Territorial Council opened the event by reading out the articles in the declaration on the end of slavery on April 27, 1848. That was followed by a segment “Who were we?” by Emile Choisy School Bibliotheque Centre Documentaire (BCD) pupils Diandra, Sarah, Aleia and Daylia, and songs sung by children from the choral group “Shining Diamonds” Bertanie, Romelia, Melodie, Samira, Ayanna, Kiana, Achely Akila, Sacha and Zoria, coordinated by singing teacher Natisha Hanson.

The Grain D’Or dancers gave an interpretation of slaves escaping.

Short speeches on the theme of slavery were made by Préfète Déléguée Sylvie Feucher, First Vice-President of the Collectivité Valérie Damaseau, and Députee Claire Guion-Firmin. Prior to the speeches Sidonie Miller sang “Oh Sweet Saint Martin Land.”

“It is imperative that we use moments like this to remind others of the high price that was paid for us to be free today,” said Damaseau in her remarks. “The way we live, the way we talk, the way we laugh, the way we dance, and even the way we think is all inherited from our ancestors. It’s important to know where we came from and to understand where we are heading.”

She thanked historian Daniella Jeffry for undertaking the research to establish the proper date of the end of slavery in St. Martin. A minute’s silence followed to remember the victims of slavery.

Feucher noted in her address that modern-day slavery continues to exist in many parts of the world. “Forty million persons around the world are victims, 71 per cent of whom are women and young girls,” she said. “France continues to fight against all forms of slavery. This commemoration exemplifies the republic’s values of freedom, equality and fraternity.”

Wreaths were laid at the foot of the Lady Liberty statue by Feucher, Damaseau and Guion-Firmin.

The final cultural segment was “Presenting the Village – Life after Emancipation” by “Mister Jombole from Colombay”, presented by Melissa Fleming’s theatre group.

Percussionist Hélier Coquillas accompanied all the cultural segments as he does every year.

The audience much appreciated the visually- and culturally-rewarding event organised by the Collectivité’s Culture Department. 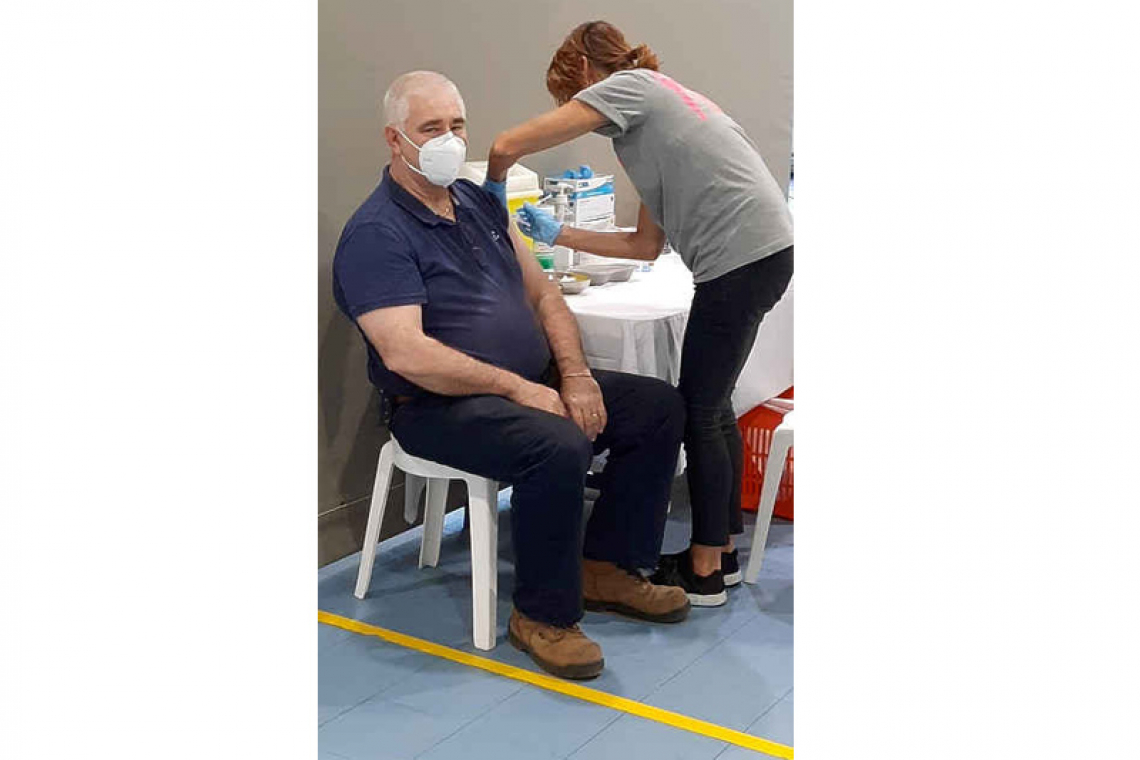 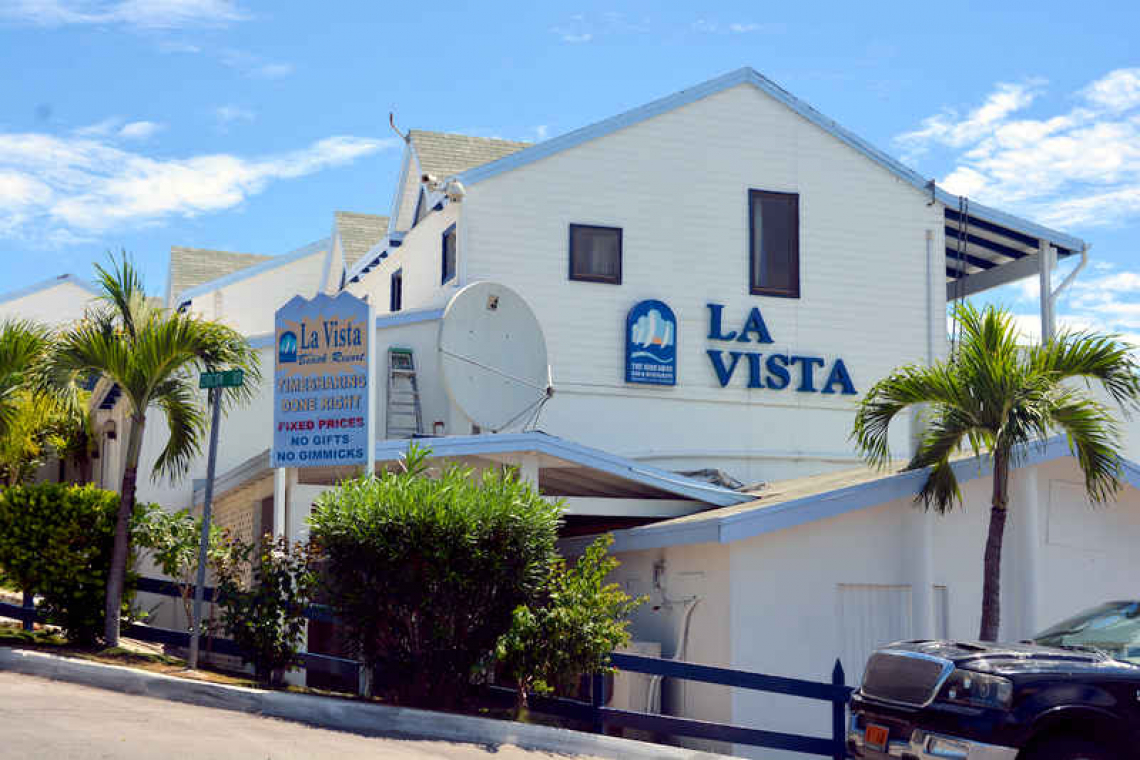 April 14, 2021
0
La Vista PHILIPSBURG--The St. Maarten Timeshare Association (SMTA) said it had taken note of the importance of educating its staffers about the coronavirus COVID-19 vaccine.   While it is not mandatory to take the vaccine, it is very important that...
Read more

April 14, 2021
0
La Vista PHILIPSBURG--The St. Maarten Timeshare Association (SMTA) said it had taken note of the importance of educating its staffers about the coronavirus COVID-19 vaccine. ...

Anguilla to open without quarantine to vaccinated tourists from July 1 | THE...