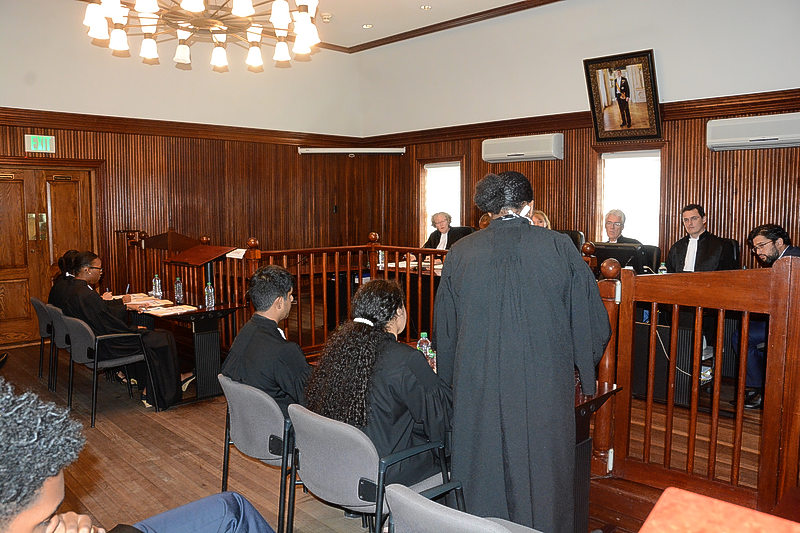 St. Dominic also won the first edition of the competition in 2015, making this its second win in a row. The team received their championship trophy from Minister of Justice and Deputy Prime Minister Rafael Boasman, who was also present at the hearings. In addition to the best team, the best speaker of the day, Briani Penijn of Milton Peters College (MPC) was also awarded a trophy.

St. Maarten Moot Court Foundation organised this second competition for high school students to show their skills in the courtroom. During a preliminary hearing before Judges of First Instance at the Courthouse on Friday, St. Dominic and Penijn as best speaker argued their way to an international moot court before the International Criminal Court in January 2018. Other participating schools were Caribbean International Academy (CIA), St. Maarten Academy (SMA) and Milton Peters College.

During the court session, which was witnessed by Minister of Finance Richard Gibson, Minister of Education Silveria Jacobs and Members of Parliament Sarah Wescot-Williams, Perry Geerlings and Rodolphe Samuel, the three-member school teams went head-to-head as the defence and prosecution in mock proceedings in a case involving war crimes and weaponry.

Students argued their sides of the case based on international criminal law as applied by the International Court of Justice seated in The Hague. The pleadings were in English, as they will be in the international competition. The panel, comprising five judges, was presided over by St. Maarten Judge Katja Mans.

Together with best speaker Briani Penijn of MPC, they will head to the Peace Palace in The Hague next year, where they will argue a case in front of judges of the International Court of Justice and other international tribunals located in that city in next year’s High School International Moot Court.

There the St. Maarten team will compete against teams from some 18 countries, which in the past have included the United States, Russia, China, Germany, Argentina, Bulgaria, Georgia, South Africa and Sweden, among others.

Students had two months’ time to prepare their cases. They were assisted and advised by St. Maarten-based attorneys and other legal experts.

“I’ve always been interested in law and wondered what it would be like to compete on a case. It’s been stressful, but good overall. It’s a lot of pressure, because we all want to win,” said Destiny Jagtiani (17) of CIA.

SMA selected its students by giving all applicants a mini-case, of which they had to give a short presentation.

“Students were picked based on their performance,” said Vincia Nelson (17). “We had lots of meetings. It was so much fun working with real lawyers. They were so supportive and kind. Working with them made me look at this as an experience rather than a competition.”

Raquel Chayadi (17) of MPC really enjoyed the preparation. “I thought it would be really serious and hard to do because as a teenager you very rarely come into contact with the law. However, our coach made it fun. Coming here, I think even if we don’t win, I am grateful to get to have this experience,” she said.

The Moot Court may have been a life-changing experience for Gayatri Malchijani (18) of St. Dominic, who said, “I would recommend this for younger students because it exposes you earlier to possible jobs. I really want to go into the medical field but this competition made me see that maybe the legal field would be something for me.”

The panel of judges praised the high level of all competitors during the prize-giving ceremony at Holland House Beach Hotel and said they had seen “incredible enthusiasm, motivation and flair.”

“This case was so incredibly difficult. In real life, only the finest of the finest present these cases and here you are, students, presenting so well and showing us how hard you worked,” Judge Mans said.

In describing the different teams, Mans said the CIA team “never gave up and had a remarkably strong rebound.” MPC was praised for “its strong rebound and pleading structure” and St. Dominic was praised for its exceptionally good speakers. The SMA team stood out for their “liveliness” and for “engaging and keeping the attention of the judges.” MPC 2 was described as “eloquent” and had responded well to their opponents and to questions by judges, said Mans.

Funding is available to send three students to The Hague, but considering that delegations may consist of as many as eight students, the SXM Moot Court Foundation calls on sponsors to make it possible to send five more “eloquent winners” to the Netherlands.