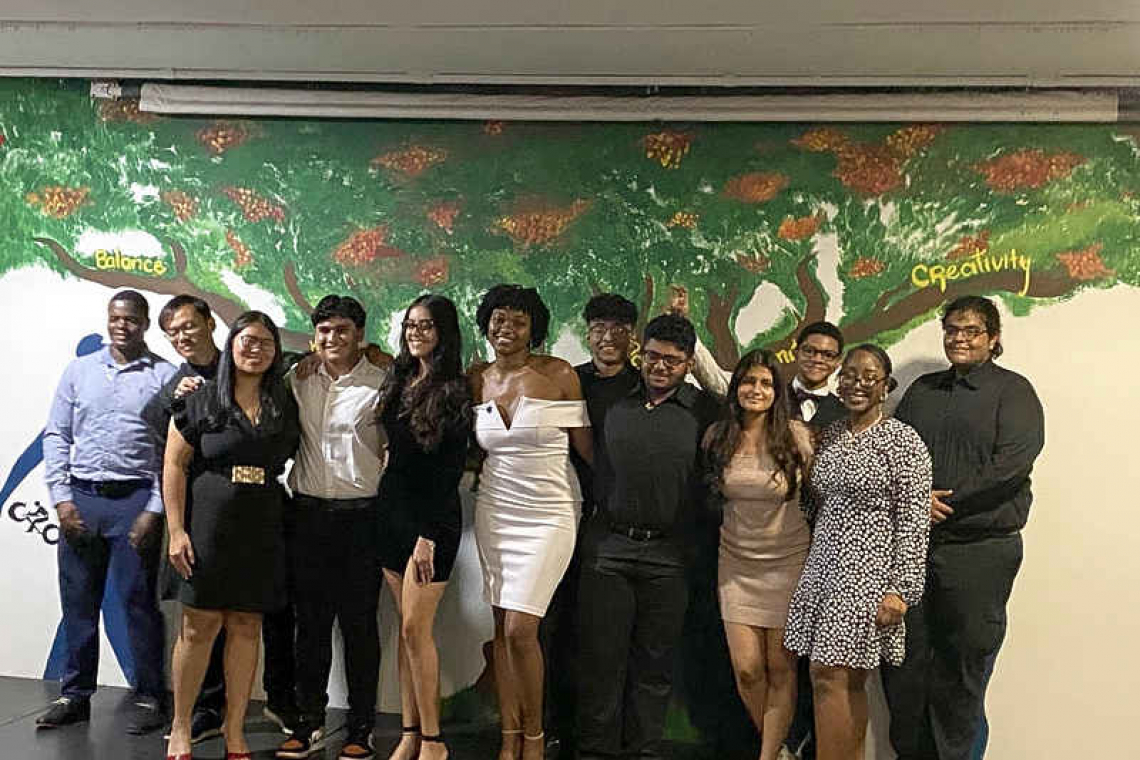 The mighty dozen: the 12 IB candidates who passed their exams.

The school had 12 candidates registered in the May sessions for 97 subject entries.
Notable individual achievements for this examination session are Diya Sachev, who scored 37 points for her subjects, which included a grade seven for Biology Higher Level (HL). With the accumulation of the three bonus points for her performance on her Dutch B Extended Essay (EE) and Theory of Knowledge (TOK) assessments, Diya achieved 40 points out of a possible 45.

Oluwatoyin Aladejana performed well and was the only candidate who had seven examination subjects. Diploma candidates are only required to take six subjects – three SL and three HL – to qualify for the diploma. The seventh subject is considered an additional subject and does not count towards the total points needed to achieve the diploma. Oluwatoyin received an A for her English Literature EE and a B for her TOK assessment, garnering her the maximum three bonus points. Grades are awarded on a seven-point scale with one being the lowest and seven the highest. EE and TOK are graded based on a letter scale – A to E, and candidates can be awarded up to three points for the combined grades they receive for the two subjects.

According to the 2022 IB Diploma Programme Provisional Statistical Bulletin, 113,706 students from 2,932 schools in 150 countries sat the May session examinations. The St. Dominic High candidates who received the diploma this session achieved average total points of 33 and a mean grade of 5.19. These are both slightly higher than the global mean diploma point score of 31.98 and mean grade of 5.12.

Diploma Programme Coordinator Marie Richardson: “100% success in one shot despite the challenges we encountered due to the pandemic. Two years ago, this mighty dozen embarked on their advanced secondary education with a single objective – the diploma. They challenged themselves and became adept at using online platforms to attend classes during the start of their first year. These students demonstrated grit and are well equipped now to face the academic and social challenges of university and the world of work. By developing themselves, they simultaneously appreciate their role in the world and the interconnectedness of humanity. We are proud that St. Dominic High School is in step with the performance of other IB schools around the world.”

St. Dominic High was the first government-subsidised school in the Caribbean to be authorised to offer the IB Diploma Programme. The Diploma Programme is a rigorous and academically challenging pre-university curriculum where students select and study six subjects from five groups – literature, foreign language, individuals and societies, experimental sciences and mathematics. In order to qualify for the diploma, students must complete the following core requirements: a 4,000-word EE, the TOK course which examines how knowledge is acquired and the various kinds of knowledge that exist, and Creativity, Activity, Service (CAS) requiring students to engage in the arts, sports and the community. The Diploma Programme was designed to not only address the academic needs of each student, but also to target the students’ social, emotional and physical well-being in order to give them the skills to be successful, contributing citizens and members of our global community.

St. Dominic High will have an information session on November 17, at 6:30pm for students interested in becoming an IB student and wanting to know more about the programme. General information about the International Baccalaureate Organization and its programmes is available at  www.ibo.org.