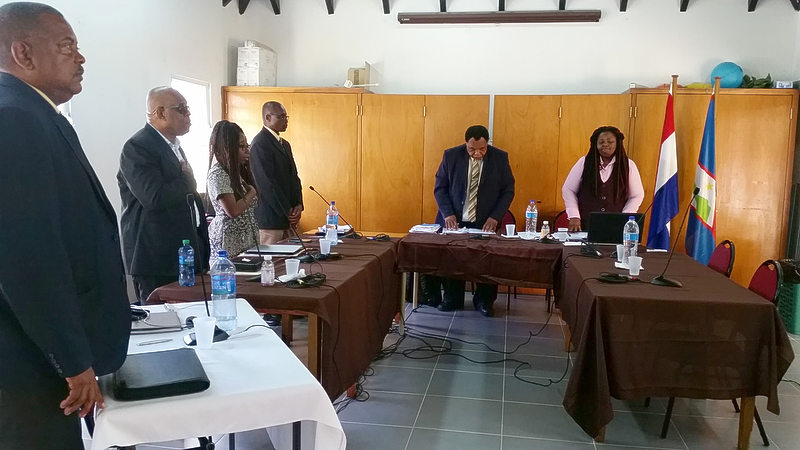 Members of the Island and Executive Councils.

Present at the meeting were Chairman Julian Woodley, Council members Clyde van Putten, Reuben Merkman, Reecheline Leerdam and Commissioners Derrick Simmons and Charles Woodley. Council members Koos Sneek and Adelka Spanner were absent, but no reason was provided. Merkman said that he left the meeting with a positive outlook for the further cooperation between the island and the Ministry; he said that it wasn’t until later on that they found out that three Dutch civil servants were left behind on the island and the reason they were left behind was because the Ministry intended to appoint them as special advisors to the Acting Island Governor.

The Council members and the Commissioner expressed outrage with the manner in which the Island Council was informed of the decision. They said that the decision was even more egregious because of who the three civil servants were, including Jenny Thuinnesen, who was unanimously turned down by all five Island Council members as a potential Acting Island Governor for the Island.

The other two civil servants, namely Linda van Watering and Sybern van Dam the Council members said they were not in favour of as they too had run into issues when they were placed in positions of power.

Van Putten said that Van Dam used to be the director of RCN in Bonaire, but had to leave in disgrace.

Woodley said that persons were telling him after the meeting that he had caused further supervision to be put on the island.

He said that costly research went into those reports but at this point nothing has been done to see about implementing any aspect of the suggestions that the reports contained. He said that the experts recommended changes, but their advice was ignored.

He said the system keeps Government bills that are due for three to four months before they are paid.

He said the IdeeVersa and the Spies reports said that the manner in which the laws were implemented was not done in a humane manner.

The Commissioner turned the conversation to the Medical school that was closed on the island, which he said was closed due to Dutch interference. He said the closing of the medical school caused US $5 million to be lost to the Island’s coffers. The closing of the medical school, he said, had a trickle down negative effect on the island whether it was the loss of house-rent to residents, stores losing out on sales due to less people buying goods and the loss in vehicle tag sales that the island itself lost out on.

The Commissioner then talked about some of the sabotage that has taken place at the planned Waste Management Plant, where someone had intentionally rewired the electrical circuits. He said had the sabotage not been caught the equipment might have caused the Plant to catch fire.