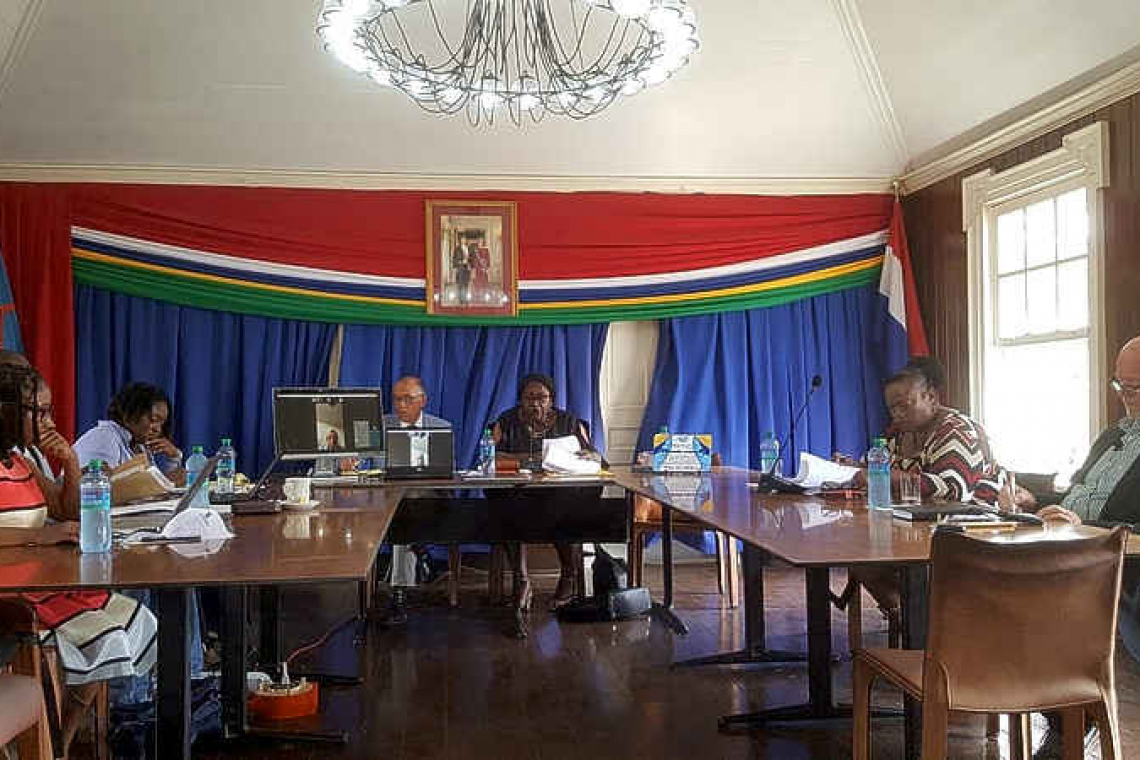 Members of the Island Council seated at the meeting as they honour outgoing Government Commissioner Marnix van Rij (on monitor) virtually.

Van Rij’s term as Government Commissioner came to an end on April 18. He will now take up the post of the Interim Chairman of the Christian Democratic Appeal (CDA) party in the Netherlands.

Each island council member was given a chance to say a few words about the outgoing Government Commissioner. Council members all thanked Van Rij for his many contributions to the island, as progress can be seen taking place on the island. They commended him for his ability to work together for the betterment of the island and all he has done for the island especially during the pandemic. They further hoped for the government commissioners’ continued support to the island.

Progressive Labour Party (PLP) leader Rechelline Leerdam said that many times the council and the Government Commissioners did not see eye to eye. “With your open-mindedness, you tried to come to a middle ground where we were able to at many times reach that middle ground to find a solution,” she said. She further hoped that the island would continue to receive Van Rij’s support in an effort to continue development on the island.

Democratic Party leader Adelka Spanner wished him success with his new post. “I look forward to your continued support and lobbying for projects and finances for Statia while you are in The Hague,” said Spanner.

Independent councilman Koos Sneek said, “It is a pity that you are leaving us and I believe it is not good for the continuity of a process that we are in, but for your part it is understandable, as you got the call and you have to adhere to the call, and that’s what you did to help strengthen and bring the CDA back into the spotlight.”

He said that Van Rij’s new position with CDA would establish a connection that would be in the benefit of the government of Statia and its people.

Councilman Reuben Merkman of PLP said he was sad to see Van Rij depart, but he is a firm believer in creating and building networks. He said progress had been realised on the island since Van Rij came to Statia.

Deputy Government Commissioner Alida Francis bid farewell to her colleague and mentor. She said that in December 2019 when she was interviewed by Van Rij, one of the strategic priorities that came out of that meeting was how important dialogue is, whether it is with the community, civil servants or the political leaders.

Francis said they had not foreseen the pandemic when they took the job, but even throughout the pandemic, dialogue has continued and flourished with the different stakeholders on the island. She said that together with the community and the island council, they would all work together to develop the dialogue, not only with the executive and Island Council, but for the success and the return democracy on the island.

“On behalf of myself and the entire civil service, we thank you for your valuable contributions, as we have seen the progress and we are committed to continuing that progress in close collaboration and consultation with all the relevant stakeholders,” said Francis.

A plaque was presented to Van Rij on behalf of the Statia government.

Van Rij spoke via video conference and said he was humbled and thankful for the kind and warm words that were spoken about him by the island council members.

This person, he said, would know the island’s history, but also would be someone that would take a leadership position on the island. He said he had never realised that the pandemic would happen, but the success of the island’s COVID-19 policy was due to the persons on the island and all stakeholders taking the pandemic seriously and making sacrifices to ensure the island was mostly COVID-19 free.

“I learned that the community of Statia are not only independent and proud people, but that they know what to do in a crisis situation,” he added.

Van Rij said he will always remember the good working relationships that he built with political leaders. He encouraged the council to continue consensus-building, as the most difficult part of politics is finding a compromise.

He also encouraged the council to build up a network in The Hague and work together with the Central Government. “This is such a beautiful island and such good things are happening on the island and there’s so much potential, and I will be a strong proponent for defending all of the Statian causes in The Hague,” said Van Rij.

He ended by saying he already misses the beautiful climate of Statia, because it is extremely cold in the Netherlands. “The climate of Statia also reflects the people of Statia, which is warm and friendly and also direct, like its people,” said Van Rij.

He said he appreciated working with the council and after this job for his political party ends, he intends to return to the island.