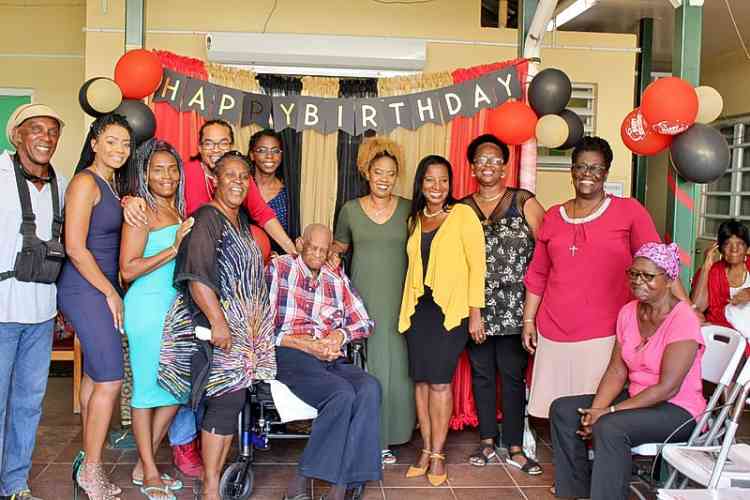 Auxiliary Home resident William “Uncle Bill” Euson (seated, centre) during the celebration of his 101st birthday surrounded by his family, with his niece Zaida Euson (standing to his left). Reverend of the Bethel Methodist Church Vincia Celestine is at far right.

EUSTATIUS–The oldest citizen of St. Eustatius, William “Uncle Bill” Euson celebrated his 101st birthday among family, friends and well-wishers at the St. Eustatius Auxiliary Home, where he resides, on Thursday.

Also present for the celebration was Reverend of the Bethel Methodist Church Vincia Celestine, who read from the scripture. Family, friends and Auxiliary home residents sang various of Uncle Bill’s favourite songs and hymns. Euson enjoyed the festive atmosphere and his birthday guests, especially his niece and caretaker Zaida Euson.

Stevie Wonder’s “Happy Birthday” was performed, as well as “Electric Slide.” When Kool & the Gang’s “Celebration” was played senior citizens took to the floor and showed their dancing skills, with Euson swaying his head to the rhythm of the music.

Deputy Government Commissioner Mervyn Stegers extended his apologies to the family for not being able to attend the celebration due to a meeting taking longer than expected. He promised that he would stop by later during the day.