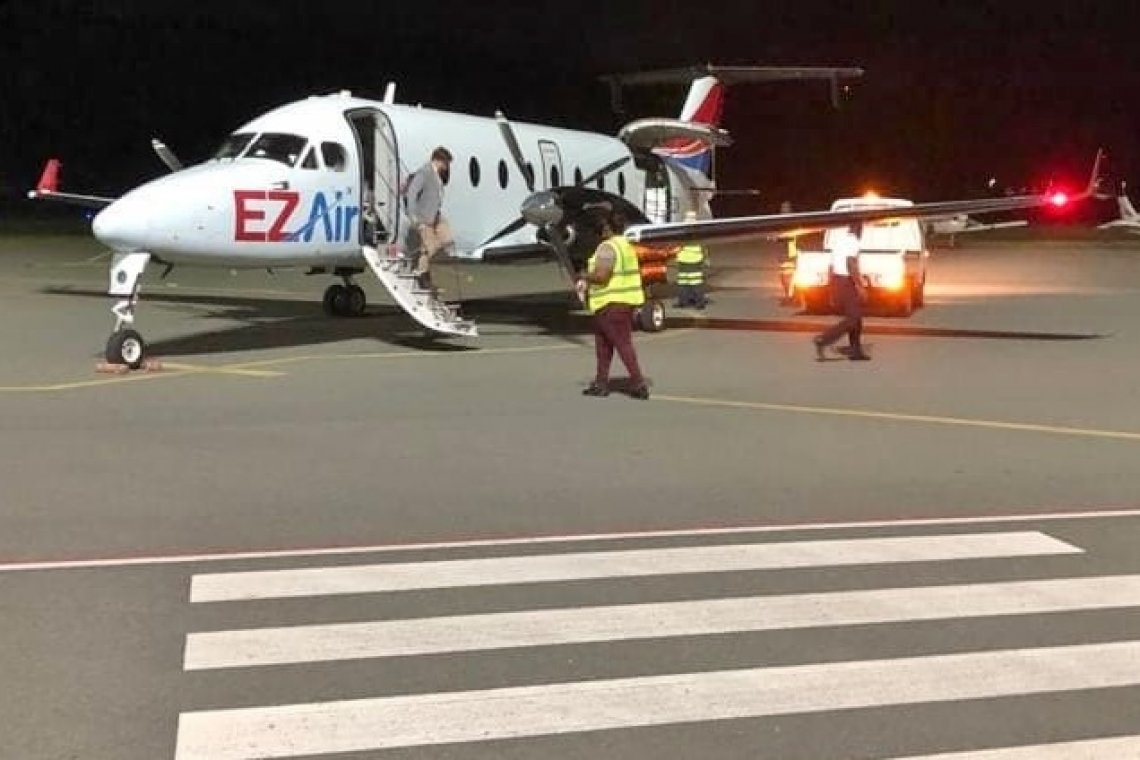 The crisis manager from the Netherlands disembarking from a chartered EZ Air aircraft at F.D. Roosevelt Airport in St. Eustatius.

ST. EUSTATIUS–Government Commissioner Marnix van Rij stated that the Public Entity St. Eustatius had submitted a request to the Ministry of Defence on March 18, concerning acquiring a much-needed increase in the medical capacity on the island such as more medical equipment, nurses and doctors. He said that while not everything Statia has asked for has been honoured, the Ministry has sent an experienced crisis manager to provide extra support during the coronavirus COVID-19 crisis.

The crisis manager from the Netherlands arrived in Statia on an EZ Air chartered aircraft from Bonaire on Tuesday, April 7, and was immediately put into self-quarantine. The identity of the crisis manager was not revealed.

Van Rij said that the crisis manager already started working with the crisis team behind the scenes, not physically, but via mobile phone and Internet connections.

The crisis manager was brought to Statia to assist the island’s “white column.” More specifically, head of the Public Health Department Carol Jack-Roosberg had specifically requested this.

Both the Public Health Department and Queen Beatrix Medical Centre will benefit from the crisis manager, “as there is a lot of pressure on our teams, this person with all his experiences will help out and he will also monitor the currently developing situation as well as the management of the crisis,” Van Rij said.

Currently, there are 14 persons in self-quarantine and two in isolation on Statia. Sixteen tests for COVID-19 were carried out, 12 of which came back negative, two persons tested positive and two were retested.

Two persons who were previously tested positive for COVID-19 and who were placed in isolation, were tested again. Their second also returned positive. Therefore, the number of COVID-19 cases on Statia remains at two.

On Wednesday, April 8, nine persons travelled to Statia via SXM Airways and were placed in self-quarantine. These persons included patients who had departed for medical treatment and others who were stranded abroad.