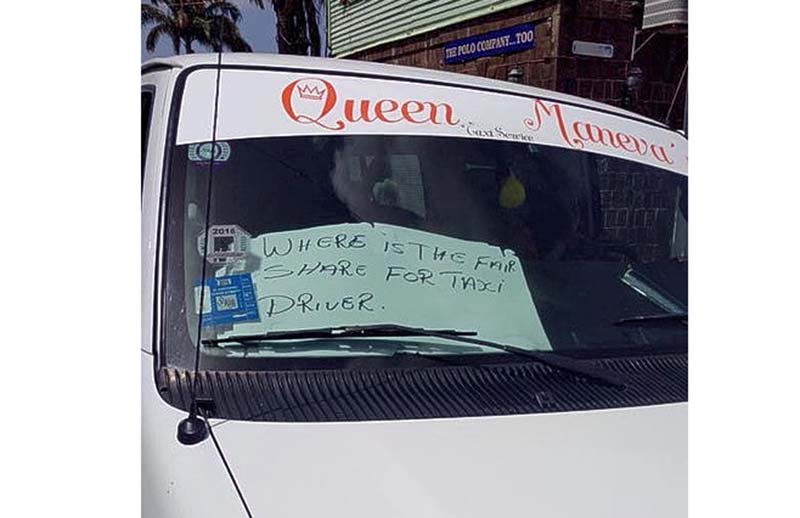 A placard is displayed inside a taxi taking part in the protest.

Disgruntled taxi drivers demanding their “fair share” from the Team Unity Government of Prime Minister Dr. Timothy Harris honked their horns and displayed placards demanding better treatment and accused the government of favouring the big tour operators.   Sylvester “King Socrates” Hodge claims that the new dispatching system implemented last February by Minister of Tourism Lindsay Grant is flawed and meetings with him have been fruitless.   “We are asking for a fair dispatching system at Port Zante for all the taxi operators and safari. There’s a system put in place since February 14. It was an experiment found to be not the best arrangement for all,” Hodge is quoted as saying on Canady Browne’s blog.

Hodge disclosed that several fruitless meetings had been held with Minister Grant and stakeholders believe that the system ought to change for the benefit of all.

“Our issue is they are waiting too long,” Hodge said in an invited comment.

The taxi drivers are demanding one dispatching system for all. Hodge, who is a director on the St. Kitts Tourism Authority (SKTA) Board, pointed out that the “SKTA is responsible for the dispatching system and has the authority to dispatch the work evenly for everyone.”

One taxi driver told reporters covering the event, “We want we fair share.”

Another said: “The tour operators are allowed 16 passengers at US $25, but members of the taxi association are only given two passengers destined for Frigate Bay. The safari is guaranteed US $400 per tour.”

Socrates noted losses to the National Fortress and vendors whenever the safari tours bypass Brimstone Hill. The foundation alone loses US $10 per person. He said all the pressing matters have been presented to the Ministry of Tourism, but unfortunately the stakeholders have only received promises that their concerns would be addressed.

Tuesday’s loud protest through the streets of Basseterre was to pressure the Tourism Minister to act before the start of the 2017-18 cruise ship season. No ships were in port during the protest action.

The taxi drivers’ protest is the third St. Kitts has seen in nine days. Protesters greeted Prime Minister Harris as he left a radio station on May 8. They later assembled outside his office on Church Street to protest government’s handling of the Chinese fugitive matter.