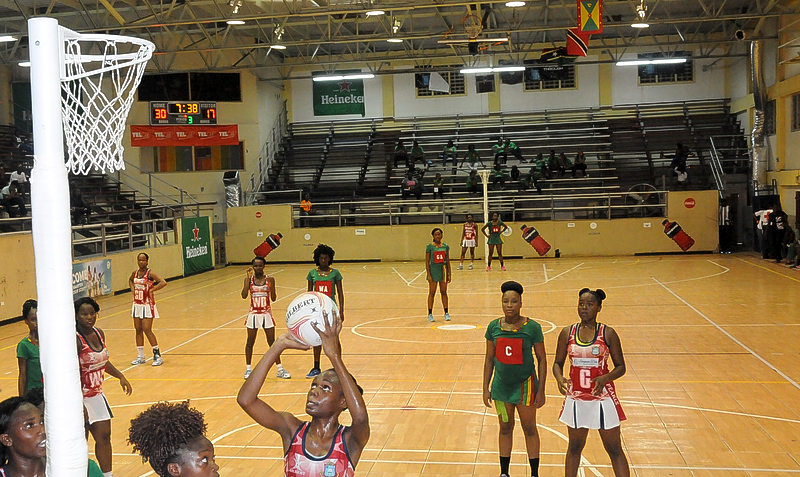 Of interest is that rain stopped play with 4:19 left on the clock. A brief shower of rain caused water to blow through the windows and doors at the eastern end of the auditorium. The referees were forced to stop the match because the wet floor became too dangerous for the players to run and jump up and down the court.
St. Kitts Goal Shooter Alia Gibson out-jumped and out-shot her opponent to lead her team to the first win of the tournament. She finished with 35 out of 54 attempts. The other contributors to the significant win were Goal Attack Laquanda Connor with six out of eight and Goal Shooter Aaliyah Gibson with four out of four attempts.
St. Kitts started off the match very fluently in attack with creative rotations and ball distributions and went ahead with a 6-0 lead. Every goal scored in that period was greeted with rapturous applause and screams that seemingly took away the home court advantage from the girls from the Friendly Island.
St. Maarten’s Goal Shooter Jamaiah Newton gave the home team its first goal after three minutes of play. St. Maarten then went on a 5-1 run which resulted mainly from swift movement off the ball which opened a lot of cracks in the defence of the opposition. But the visitors lifted their intensity and by the end of the first quarter, the score read 12-5 in favour of St. Kitts.
For the rest of the match, the St. Kitts players found a way to get the ball to Gibson whose superior prowess in the air was never controlled by the home team. She won all the balls lobbed in her area and had second attempts every time she missed her first shot. The coaches decided to insert Sasha Guy Campbell as a marker for Gibson and though Campbell manhandled her on the floor, Gibson’s superior height and jumping abilities were enough to give her regular goals.
For St. Maarten, Odesa Mc Bean led the team with 15 out of 22 attempts. Newton finished with six out of seven attempts; a big contrast in her attempts from the first match, in the first match against Argentina, she had 15 attempts. Kayla Robinson hit four out of nine attempts.
Jeanice Landefort who is the Goal Defence for St. Maarten injured herself in an awkward fall after she collided with a St. Kitts player. She was taken off but returned to the auditorium later with two stitches on her chin and a brace on her right hand.
Coach of the St. Maarten team, Desmond Seymour said the injury affected his players and the defence of the team. “The injury to our Goal Defence affected our strategies badly.” lamented the coach, “We were forced to play some players in positions they are not accustomed to play.” Asked if he thought his team was outplayed by St. Kitts, Coach Seymour said, “Not at all. They out-jumped us but we played well right through the match.”
The result in the other matches from yesterday showed; Grenada defeating Argentina by 51 to 13 and Barbados thrashing Canada by 67 to 15.
St. Marten next match is against Grenada at 8:30pm tonight. The other matches scheduled for today are Trinidad and Tobago against Argentina from 10:30am and Barbados takes on St. Kitts from 6:30pm.