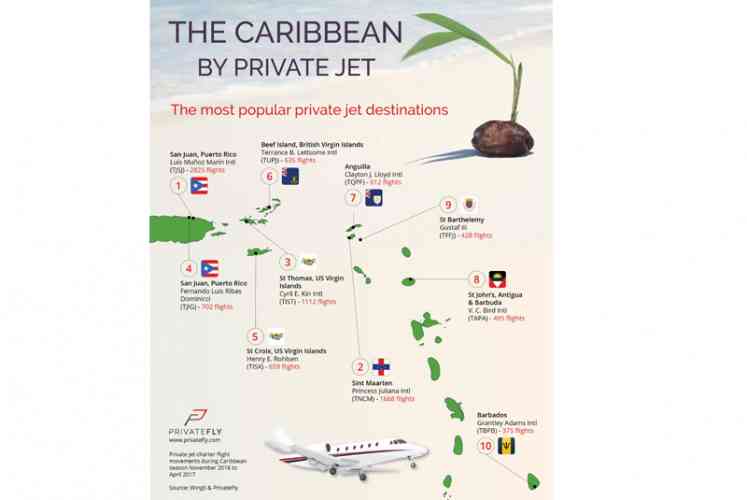 Infographic about most popular private jet destinations in the Caribbean.

LONDON/MIAMI–PrivateFly, an internationally operating company that offers private jet charters, shared some good news for St. Maarten on Thursday, even though it is based on figures of 2016-2017. Princess Juliana International Airport (PJIA) ranked number two in the top ten busiest airports for private jet charter flights.

“During the winter months, many of our leisure clients look to escape to warmer climates in the Caribbean. And when it comes to getting around, the island geography of the region means on-demand private jet charter comes into its own, flying point-to-point between destinations that are not easily reached any other way,” PrivateFly stated.

“Some clients choose to use a long-range private aircraft for the whole journey – whether flying from Europe or the United States – with popular departure points including Miami, New York and Los Angeles. Others choose to use a combination of airline flights and private aviation to reach their final Caribbean destination.”

PrivateFly stated about PJIA that it offers one of the world’s most stunning landings. It was noted that the landing at St. Maarten was voted number 9 in PrivateFly’s annual 2018 poll of ‘The World’s Top 10 Scenic Landings.’ Saba was number five in that same poll.

PJIA is another important hub in the Caribbean, connecting airline flights and larger private jets with smaller aircraft bound for more remote islands, according to PrivateFly.

Anguilla and St. Barths were mentioned as destinations that attract luxury travellers from around the world. Other popular private jet airports in the Caribbean include Lynden Pindling International Airport in Nassau, Bahamas; Providenciales International Airport, Turks and Caicos; Marsh Harbour Airport, Abaco Islands, Bahamas; North Eleuthra airport in the Bahamas; and Owen Roberts Airport in the Cayman Islands.