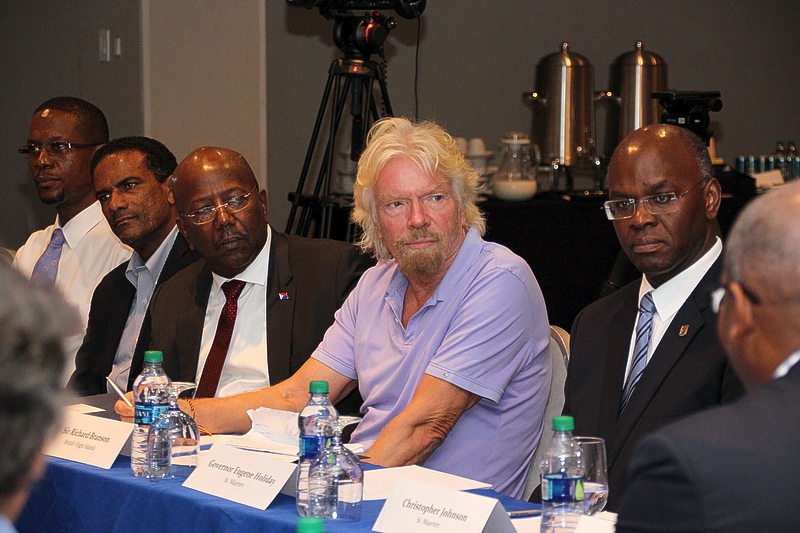 MAHO–Government representatives from Caribbean islands talked of the concrete steps they are making in implementing shark conservation measures in their respective exclusive economic zones (EEZs) at a press conference convened Wednesday during the Shark Symposium at Sonesta Ocean Point and Maho Beach Resort and Casino.

St. Maarten and the Cayman Islands confirmed that commercial shark fishing is prohibited in their territories, while Curaçao and Grenada announced they are in the process of implementing legislation this year to protect sharks.
The announcements came during the three-day shark conservation symposium co-hosted by the Government of St. Maarten, St. Maarten Nature Foundation, the Bahamas National Trust, and The Pew Charitable Trusts.
At the symposium, Caribbean leaders had the opportunity to learn from global shark experts, such as Boris Worm, professor in marine conservation biology at Dalhousie University in Halifax, Nova Scotia, and to discuss shark conservation and shark-related tourism in their jurisdictions.
Virgin Group founder and ocean advocate Sir Richard Branson used his high profile at the symposium to follow up the conference on shark protection he organised last year in Bimini, Bahamas. He was one of the speakers on Wednesday along with other government dignitaries from the Caribbean.
“Scientists tell us sharks and rays are being slaughtered at twice the rate they can reproduce. With so many species in danger the time is right for bold action,” Branson said. “The BVIs [British Virgin Islands – Ed.] became a shark sanctuary in 2014, following the Bahamas in 2011. I want to thank St. Maarten for joining the BVIs, Bahamas, Saba, Bonaire, and Caymans in announcing their shark sanctuaries.
“Each year we’re getting closer to a Caribbean regional shark sanctuary. I want to ensure sharks will be there for future generations. Today I’m calling on the remaining governments in the Caribbean to follow the lead and fully protect sharks. Africa would not be the same without lions; so oceans will not be the same without sharks and rays.”
Prime Minister William Marlin stated in his address that St. Maarten’s shark sanctuary had been established in 2012 for 10 years but it had been decided to prolong it indefinitely.
“We hope to work on completing legislation to ensure a formal ban to [killing sharks – Ed.], joining other Caribbean countries that have already done so,” he said. “We have come to believe sharks are dangerous or man’s worst enemy, but it couldn’t be further from the truth. We are learning from this symposium how important it is to preserve sharks.”
St. Maarten’s Minister of Tourism Ingrid Arrindell added: “St. Maarten’s shark sanctuary will help to ensure that our local shark populations exist for future generations and continue to benefit St. Maarten’s marine ecosystem and ecotourism. People from all over the world come to our island to dive and snorkel with our marine wildlife, including sharks and rays.”
Stanley Martina, representing Curaçao’s Minister of Employment and Nature, said: “In the framework of Blue Hello Curaçao, in cooperation with the Pew Charitable Trust, the Government this summer will implement comprehensive marine legislation to safeguard sharks. We are proud in the Dutch Caribbean to be part of the global effort in shark conservation.”
Cayman Islands Minister of Financial Services, Commerce and the Environment Wayne Patton spoke by video link and confirmed the Caymans have stiff laws against commercial shark fishing.
“The maximum penalty for violating the law is 500,000 Cayman Island dollars and four years in prison, confiscation of vessels, vehicle or equipment,” he disclosed. “We have a small, dedicated eight-man team that has all powers to enforce the law. In the past 18 months we have been working hard to collect biological and other data to feed into a shark conservation plan. The first draft of the plan is expected in the next few months.”
Director of the Pew Charitable Trust’s global shark conservation programme Luke Warwick described the announcement of four new sanctuaries in one day as “monumental,” making the total of sanctuaries around the world 14.
“World leaders are realising the key role sharks play in keeping eco-systems healthy,” he said. “It’s hugely encouraging. Sharks are not just another species, but part of our survival on this planet.”
Filmmaker and United Conservationists Executive Director Rob Stewart announced funding of US $10,000 will be awarded to any Caribbean nation that creates a shark sanctuary.
Worldwide, at least 100 million sharks are killed each year in commercial fisheries; nearly 30 per cent of all known shark species assessed by scientists are threatened with extinction. Sharks play an important role in maintaining the health of the entire ocean, but they grow and reproduce slowly, which makes them particularly vulnerable to overfishing.
In the Caribbean, Trinidad was cited as one of the biggest catchers and exporters of shark products with more than 50 per cent of shark fins going to Hong Kong.

Source: Daily Herald
St. Maarten among four shark sanctuaries confirmed or to be set up in the Caribbean