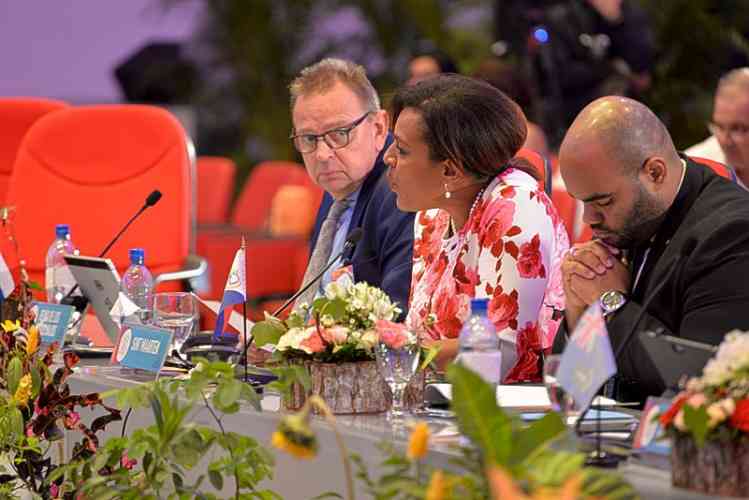 NICARAGUA –St. Maarten made a strong call to the wider Caribbean to formalise arbitrary acts of cooperation into regional mechanisms to mitigate and adapt in a changing environmental sphere.

Minister Plenipotentiary Jorien Wuite made the call at the Eighth Summit of the Heads of State and/or Government of the Association of Caribbean States (ACS) held recently in Managua, Nicaragua. Wuite was accompanied by Department of Foreign Relations Senior Policy Advisor Patrice Gumbs.

Speaking on the theme “Uniting Efforts in the Caribbean to face climate change”, Wuite underscored St. Maarten’s call by saying the effects of Hurricanes Irma and Maria were only magnified by the lack of defined disaster response protocols, particularly with the island’s regional partners.

ACS is an important organisation in that it is the only regional organisation bringing together the Greater Caribbean. This makes it well placed to become a regional leader for comprehensive approaches to natural disaster, resilience, and climate change.

Government called on ACS to use its network to leverage support for not only mitigation, but adaption initiatives. Particularly addressed were the ongoing research efforts undertaken by many governments in the Caribbean, including Panama, to establish disaster response and relief hubs within their borders.

Wuite said that in the Caribbean there is often a tendency to duplicate rather than synergise. “Our small economies of scale make investing in necessary mitigation and adaption efforts costly and at times disproportionate to the number of persons they are meant to serve. Consequently, establishing relationships with other countries to work collaboratively, and sharing best practices is important to ensuring a rapid and more harmonious recovery post-disaster,” she said.

Locally, Prime Minister Leona Romeo-Marlin has been working to correct that disconnect within the local Emergency Operations Centre (EOC) structure and on ensuring the establishment of clearer working lines and relationships with regional institutions such as the Caribbean parametric insurance agency CRIFF and the Caribbean disaster response agency CDEMA.

The European Union (EU) Overseas Countries and Territories (OCT) Resilience Forum, hosted by the St. Maarten government last year is one way in which it is aiming to work with countries and leaders in the region to combat climate change.

Since the inception of the United Nations Global Geospatial Information Management programme St. Maarten has played an active role in the project and now chairs the workgroup on the “Access and use of geospatial information for Disaster Risk Reduction on Climate Change” for the Americas region.

The value of such an initiative cannot be overestimated in grid management and in the restoration of critical infrastructure post-disaster, said Wuite.

Government thanked ACS and the government of Mexico for their generosity in making such an initiative possible and called on the association to leverage its network towards ensuring such a project can continue financially.

During the summit, ACS Secretary-General Ambassador June Soomer reconfirmed her efforts to ensure that countries donating to the organisation give unconditionally so as to include all member-countries in ACS-funded projects.

After much discussion, the association now allows for associate members like St. Maarten to take up positions on thematic committees within the organisation. This will allow St. Maarten to help to influence the regional agenda on issues such as sustainable tourism and natural disaster mitigation and is something the Prime Minister said she will take up with the respective ministries.

As a non-independent country, St. Maarten, which is often left out of regional opportunities for financing, is able to benefit from funding as well as be part of discussions at the regional level to achieve collective Caribbean interests.

The summit was chaired by Nicaragua President Daniel Ortega and the panel included the presidents of Cuba and El Salvador, the premier of the British Virgin Islands, the deputy prime minister of Dominica, and an array of ministers of foreign affairs and ambassadors of countries throughout the region as well as of countries around the world that contribute to the projects coordinated by ACS, including ambassadors from the United Arab Emirates, Japan, and South Korea.

The three-day meeting also included a Cooperation Conference that highlighted ongoing projects and presented concepts to international and regional donors for funding.

The summit ended with Ortega handing over chairmanship of the ministerial council to Barbados Minister of Foreign Affairs Dr. Jerome Walcott, who will chair the 35-member grouping for 2019-2020.