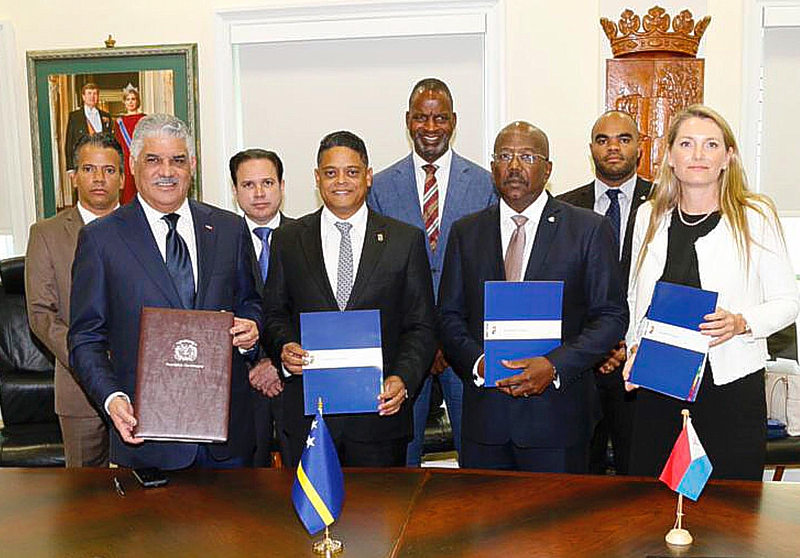 WILLEMSTAD–Government officials from Curaçao, St. Maarten, the Netherlands and the Dominican Republic (DR) met this week in Willemstad to follow up on the memorandum of understanding (MOU) signed by the Dutch Caribbean and the Spanish-speaking country a year ago.

The Apostille Treaty will make it easier for Dominican Republic nationals residing on St. Maarten to have their documents certified for legal purposes thereby reducing the time for these documents to be recognized. A number of other countries already have this privilege within the Kingdom.

The transfer of persons will allow for incarcerated nationals to serve their sentence in their respective country.

The air transport agreement regulates the legal aviation framework in the destinations covered in the MOU.

A Political Act that sets the immediate priorities for the workgroup and for the operationalization of the MOU was signed at the end of the meeting by Marlin, Curaçao Prime Minister Eugene Rhuggenaath, Caribbean Regional Envoy for Kingdom of the Netherlands in Havana Liesbeth Mol on behalf of the Netherlands and Aruba and Minister of Foreign Affairs of the Dominican Republic Miguel Vargas.

Commenting on the meeting, Marlin reiterated St. Maarten’s commitment to the MOU while noting the importance of the Dominican Republic in the foreign policy of St. Maarten.

He also indicated the importance of a strong foreign policy and regional, as well as international, partners in achieving St. Maarten’s strategic long term goals. The local Department of Foreign Relations, represented by Senior Policy Advisor Patrice Gumbs Jr., during the meeting, played a critical role in facilitating and maintaining these relationships.