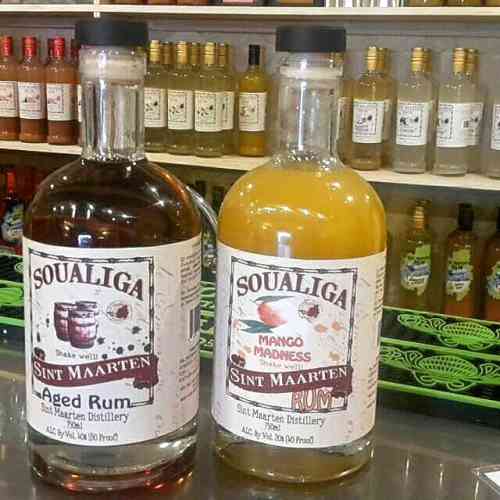 SIMPSON BAY–St. Maarten Distilleries set out to add some diversification to the local economy when it began commercially distilling and bottling its own line of locally-made rums in the country under the brand – Soualiga Rum.

St. Maarten Distilleries Business Development Officer Kelston Brooks told The Daily Herald on Monday the company began making small amounts of the rum at local restaurant Boca Marina about two years ago, and it was such a bit hit among customers that they decided to branch out and make the product commercially so that more persons can enjoy the great taste of a beverage produced from scratch right here in St. Maarten.

Another factor that influenced the decision to open the company is the fact that most of the other Caribbean islands have vibrant manufacturing industries – an area where St. Maarten had been lagging behind. “We looked at the entire industry and the manufacturing industry in St. Maarten is small and we wanted to add to that by manufacturing a St. Maarten product here. All Caribbean countries have distilleries. And we were the first to take that big step. Of course the cost factor is high, but we look at it as a long-term industry,” Brooks said.

The commercial production of Soualiga Rum began about a year ago. Prior to Hurricane Irma, the company had been distributing its product at Princess Juliana International Airport (PJIA) and Port St. Maarten, as well as at several major supermarkets on the island. They are currently looking into the possibility of exporting the product to Caribbean islands and other markets.

“While our competitors infuse their rum, we are the only company that makes rum from scratch. It is made and bottled in St. Maarten,” Brown said when asked what differentiates Soualiga Rum from other similar products on the market. “We ferment molasses for two weeks (and longer) and use that to make the rum. We have some that has been sitting in barrels fermenting for nearly two years and this is what we use to make our Aged Rum.”
The company currently produces 750-ml bottles of the rum and plans to produce other sizes in the future.

The company plans to host its official launch of the product during the third quarter of this year. “It’s a locally-made product that people can be proud of,” Brooks said, adding that persons can visit the company’s location in Simpson Bay near Bada Bing and be treated to a tour of the distillery as well as enjoy a drink of the local rum at the bar, also located at the distillery. “Anyone can visit and see the process for themselves and can taste it and experience the magic of Soualiga Rum,” he noted.