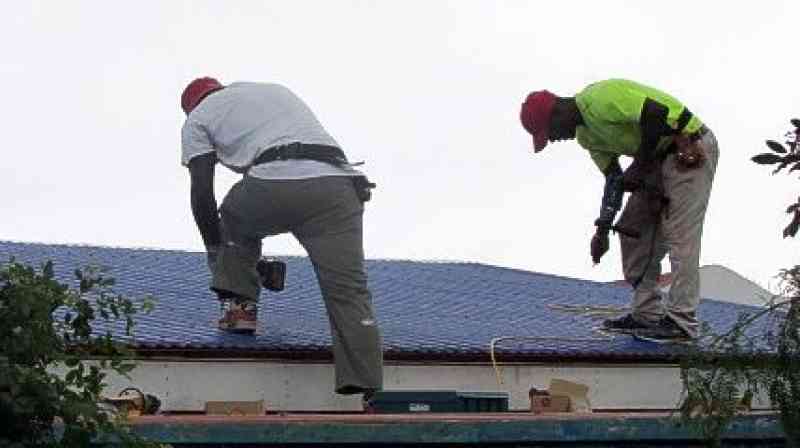 HOUTEN–The major reconstruction projects in St. Maarten are still to begin but there already is a huge shortage of construction workers on the island. This led RS Employment Agency’s manager Monique Scholten to the idea to try and recruit professionals in the Netherlands. This past weekend she and her colleagues were present at the Emigration Fair in Houten in the heart of the Netherlands.

Despite competition from employers in Australia, Sweden and Spain, but also from Curaçao and Bonaire, they had no complaints about a lack of interest. “We have received quite a few interested people in our stand. This is also necessary because we have many vacancies to fill. For our existing clients alone, we are looking for 30 professionals, and there will certainly be more in the coming period,” said Scholten, who lost her job as a result of hurricane Irma.

“Before the hurricane I worked at Sonesta Resorts. Immediately after Irma, I went to see if I could help with the guests. When I saw how big the devastation was, I became emotional. I also realised that I did not have a job anymore and that that could be for a very long time.”

Together with her partner, who works at GEBE, and their two young children they were evacuated. “We were well received in Curaçao. After a week we went to the Netherlands. After six weeks we returned because St. Maarten is my home.”
Sonesta Resorts will not be reopened for the time being. “That’s why I started working with my father’s company,” Scholten explained.

Rinus Scholten started RS Accounting and Consulting in 2003, which opened branches on Saba and St. Eustatius over the years. Several years ago, a staffing agency was added which has been flooded with requests from construction companies since Hurricane Irma.
“There is no more construction worker available on the entire island. There are customers who have to refuse orders because they do not have enough staff.”

That shortfall will increase even more when the World Bank will start distributing the 550 million euros from the reconstruction fund made available by the Netherlands.
Scholten fears that the reconstruction will be delayed if no solution is found for the scarcity in professionals. It led her to the idea to search for candidates in Aruba, Bonaire and Curaçao, and also in the European Netherlands.

“It is much easier administratively when candidates have Dutch nationality. I started in the region [Overijssel – Ed.] where we come from. After an article had been published in the regional newspaper we immediately received the first reactions. Other newspapers have also reported on it and I have spoken about it on the radio. In response, we received an invitation from the organisation of the Emigration Fair to present our vacancies here in Houten.”

After Irma, many St. Maarteners lost their jobs. Some of them will be retrained to be deployed during the reconstruction. Yet Scholten is not afraid that these people will be deprived of a job by imported labour.

“We are looking for real craftsmen, people who have been trained as carpenter, plasterer, painter, et cetera. We even have a few vacancies at engineering level. These are functions that cannot be filled locally,” said Scholten.

Candidates for a vacancy must arrange their own ticket to St. Maarten. “We do help in finding suitable accommodation but encourage own initiative. If you migrate you must have it in you to save yourself. We initially offer a contract for six months. Within that timeframe you can find out if you like it. Immediately signing for three years may be a bit ‘scary,’ but there will be work for years.”

The lower level of salaries in St. Maarten may be a stumbling block. “Craftsmen earn a net salary of US $2,000. I think that is a good salary, but if you have fixed obligations such as a mortgage that may prevent people from stepping in. It is above all a great opportunity for young people without ties and who fancy some adventure.”

At the Emigration Fair, RS Employment Agency was located at a Caribbean section, together with Curaçao House, Ban Boneiru Bèk Foundation, real estate agents from Curaçao and Bonaire and moving companies. The fair – with a record number of exhibitors – attracted over 10,000 visitors.