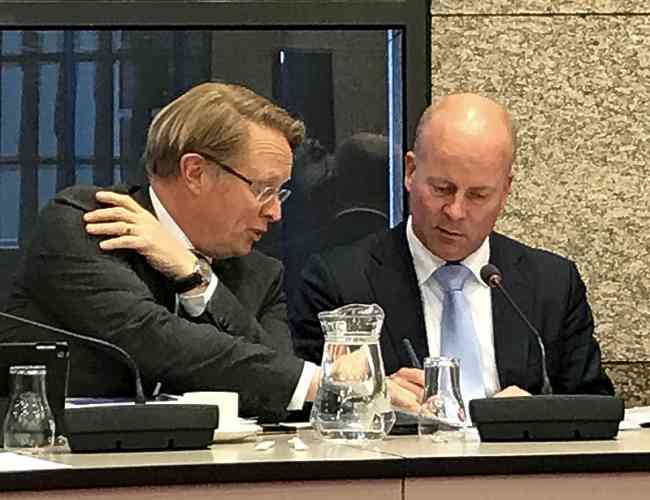 THE HAGUE–St. Maarten will be receiving 30 million euros in liquidity support, but there will be no structural budget support to cover the deficits, Dutch State Secretary of Home Affairs and Kingdom Relations Raymond Knops stated during a meeting with the Second Chamber of the Dutch Parliament on Tuesday.

Member of the Second Chamber André Bosman of the liberal democratic VVD party specifically asked the State Secretary about budget support, money which he made clear should not come from the 550 million euros Recovery Fund sponsored by the Dutch Government.

“It is important for the VVD that the money for the reconstruction is truly spent on the reconstruction and doesn’t get spent as budget support. The recovery funds and budgetary support should not get mixed up,” said Bosman, who added that it was important to keep the monetary flows transparent.

The State Secretary assured that there would be no budget support, only liquidity support to assist the St. Maarten Government in paying the most urgent bills. This liquidity support concerns an amount of 30 million euros and will be given in the form of a soft loan. “The Recovery Fund will not be used to close the financial gaps. What we will provide is purely liquidity support.”

Knops said that he could not anticipate the future and what might be decided if St. Maarten were to file a request for monetary support. But in any case, the Dutch Government will not engage in structural assistance to cover the expected large budget deficits of the St. Maarten Government due to lower revenues and higher expenditures as a result of the economic downturn.

St. Maarten’s national debt will increase over the next few years as a result of the substantial budget deficits. This is something that the Committee for Financial Supervision CFT will have to judge on and discuss with the St. Maarten Government.
Bosman said he had understanding for the fact that St. Maarten has trouble balancing its budget in the aftermath of the hurricane. “But the problems with the budget already existed before the hurricane,” he said.

The Member of Parliament (MP) said it was therefore important to have clarity on the financial status of government-owned companies like the airport, the harbour and telecommunications company TelEm. “We need clarity on the people that are on the payroll and the salaries that they earn, and what sort of dividend payment policy these companies have.” The annual accounts should become public and they need to be approved.
Bosman said it should also be clear by whom taxes are paid and how much. “How much tax do casinos, hotels and yacht owners pay? As long as that is not clear, budgetary support is out of the question.” He said that St. Maarten could take loans to cover its deficits with the approval of the Kingdom Government.

During Tuesday’s debate the vulnerable status of the St. Maarten media after the hurricane was discussed. The Today newspaper has ceased to exist, leaving The Daily Herald as the sole newspaper for Dutch St. Maarten, French St. Martin, St. Eustatius, Saba and other surrounding islands. NTRC Caribbean Network reported on Sunday that the St. Maarten press is in danger due to dwindling advertising revenues. The same goes for the radio stations.

The Socialist Party (SP), the Democratic Party D66 and the Christian Democratic Party CDA expressed great concern about the fragile situation of the St. Maarten media. During Tuesday’s meeting they asked the State Secretary to help out.

“Is it possible to facilitate a bridging credit to help the media get through this difficult time?” asked MP Ronald van Raak (SP). “How can we help the journalism sector on St. Maarten?” inquired MP Antje Diertens (D66). The media have a watchdog function and play an important role in the transparency in the reconstruction phase, Van Raak pointed out.
Knops said that he too was concerned that the media were in danger. Providing assistance, however, is a problem. The St. Maarten media can receive no support from the Dutch Media Fund because they are located outside the Netherlands. For that same reason funds from the European Union (EU) are not possible either. “We have looked into this matter, but the Dutch Media Fund is only for the media in the Netherlands. Unfortunately, I see no options for now,” he said.

The State Secretary agreed with Van Raak that the media do have an important function as watchdog of democracy, but he pointed out that there were other forms of media besides the newspaper. He mentioned social media, the various news websites and bloggers.
MP Diertens came to the defence of the newspaper. “I understand the dilemma of not being able to support the media outside the Netherlands, but the newspaper and the established media are totally different from social media. You simply cannot compare those,” she said.