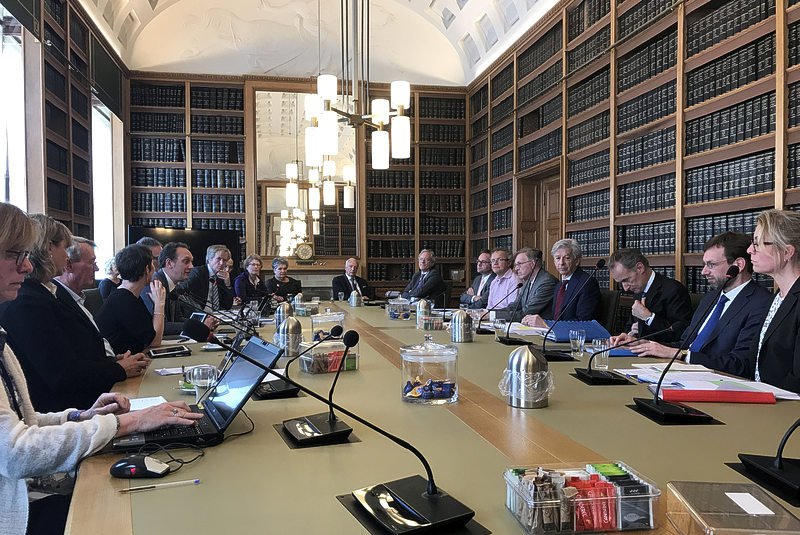 THE HAGUE–A General Measure of the Kingdom Government (Algemene Maatregel van Rijksbestuur AMvRB) to establish the Integrity Chamber for St. Maarten is back on the table and reportedly will be handled by the Kingdom Council of Ministers this Friday.

Sources say St. Maarten Prime Minister William Marlin will be attending Friday’s meeting of the Kingdom Council of Ministers. The Daily Herald was reliably informed that Marlin will meet with Dutch Minister of Home Affairs and Kingdom Relations Ronald Plasterk one day earlier, on Thursday. A meeting with Dutch Prime Minister Mark Rutte has been requested.
Minister Plasterk implied during a meeting with the First Chamber of the Dutch Parliament on Tuesday that St. Maarten might still receive an instruction from the Kingdom Government to establish the Integrity Chamber.
The agenda of the Kingdom Council of Ministers is confidential, but this newspaper understood that the AMvRB will be handled this Friday. After a positive decision by the Kingdom Government, the draft legislation will be sent to the Kingdom Council of State for advice.
St. Maarten has not stuck to the May 2015 protocol between the governments of St. Maarten and the Netherlands that provides for the establishing of an Integrity Chamber, Plasterk stated. St. Maarten’s Government and Parliament have unilaterally nullified the protocol, which has effectively cut off any follow-up to the agreements.
“Few options remain other than to resort to the issuing of an instruction now that St. Maarten has nullified the agreements,” said Plasterk, who suggested that the St. Maarten Government’s lack of action on this issue could no longer be tolerated. The Senate’s Permanent Committee for Kingdom Relations KOREL had requested an update on the establishing of the Integrity Chamber.
Plasterk said he found it “regrettable” that things had turned out this way, especially because he had always kept the door open to find a common solution for the Integrity Chamber with which both countries could live.
Plasterk met with Marlin in Aruba in February, when the Integrity Chamber was amply discussed. It was decided at that time that the consultations would continue over the course of the next weeks. No other information was made available to the media at that time.
Plasterk told the Senate on Tuesday he had been “unpleasantly surprised” when the National Ordinance to establish the Integrity Chamber, which had already been approved by the St. Maarten Parliament, was submitted to the St. Maarten Constitutional Court for review by the local Ombudsman.
The Constitutional Court rejected the National Ordinance and subsequently the May 2015 protocol was nullified by the St. Maarten Government and Parliament. In Plasterk’s opinion, St. Maarten could have notified the Dutch Government of the procedure to send the National Ordinance to the Constitutional Court. “I would have preferred to be notified beforehand of the possibility of a constitutional review,” he said.
According to Plasterk, it would have served the St. Maarten Government to subsequently approach the Dutch Government to arrive at a new agreement regarding the Integrity Chamber and the strengthening of the local law enforcement sector. He lamented the fact that Integrity Chamber Quartermaster Hans Leijtens had met obstructions in performing his task.
Plasterk did not provide further information to the Senate about the possibility of issuing an instruction to the St. Maarten Government. He also refrained from giving further comment when approached by this newspaper for a clarification, as this was a matter that would be dealt with by the Kingdom Council of Ministers.
The fact is that the earlier draft decision of the Kingdom Council of Ministers to establish the Integrity Chamber was sent to the Kingdom Council of State for advice some time ago. This draft decision was placed on hold pending a joint solution by the two countries.
The Curaçao elections also came up in the KOREL Committee meeting with Plasterk. He said that to “prevent a yoyo policy” regarding the holding of elections, the Kingdom Government had decided to issue an AMvRB to transfer the authority of organising the elections to the Curaçao Governor.
This AMvRB came into force on Monday, following a positive advice of the Kingdom Council of State and ratification by King Willem-Alexander. Plasterk said the guarantee function of the Kingdom for good governance entailed timely intervention, not after the situation has gotten out of hand.
He said it was also important that it was clear that the process of holding free and fair elections had to proceed in the interest of a democratic society. He confirmed that the Organisation of American States (OAS) and Caribbean Community Caricom had agreed to be present at the elections as independent observers. He said the Curaçao Prosecutor’s Office would be extra-alert for signals of corruption and vote-buying.
Senator Meta Meijer of the Socialist Party (SP) asked what it would mean for the Kingdom if a corrupt government headed by the MFK party and its leader Gerrit Schotte would form the next Curaçao Government.
Senator Hans Engels of the Democratic Party D66 inquired what could be done to improve stability in government.
Plasterk replied that Curaçao had had stable governments until very recently and it remained to be seen how things would further develop in Curaçao. Regarding the sentencing of Gerrit Schotte for corruption, he said persons who had received a final guilty verdict of the Courts would not pass the screening to become members of government.
Senator Sophie van Bijsterveld of the Christian Democratic Party CDA addressed the more fragile role of the Governors after the “buffer” of the Central Government had disappeared with the dismantling of the Netherlands Antilles.
Plasterk said that indeed the role of the Governor had become more complicated since the new constitutional relations went into effect. He expressed great appreciation for the Governors of Aruba, Curaçao and St. Maarten. “We have very good and strong Governors, and we fully support them,” he said.