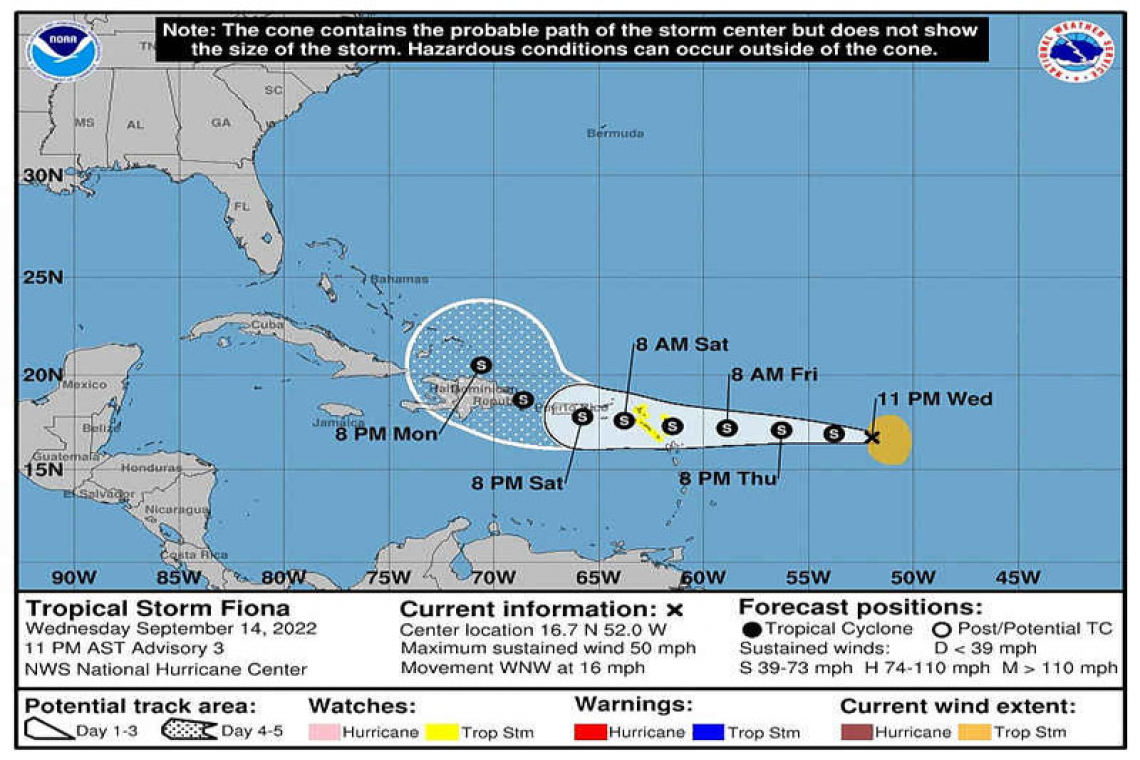 PHILIPSBURG–Tropical Depression (TD) Seven formed Wednesday morning and by 9:45pm had strengthened to Tropical Storm Fiona, according to a report from the US National Hurricane Centre. St. Maarten is now on a Tropical Storm Watch.

Fiona was located near latitude 16.8 North, longitude 52.0 West or 645 miles (1,040 kilometres) east of the Leeward Islands, moving toward the west (280 degrees) near 14 miles per hour (mph) (22 kilometres per hour (km/h)) and this general motion is expected to continue during the next few days.
On the forecast track, the system’s centre is forecast to move through the Leeward Islands late Friday or Friday night and be near the Virgin Islands and Puerto Rico this weekend. St. Maarten Fire Chief and National Disaster Coordinator of the Office of Disaster Management (ODM) Clive Richardson called on residents and the business community to remain vigilant and prepared.
Tropical Storm Watches (when tropical storm conditions of sustained winds of 39 to 73 miles per hour are possible within the specified area within 48 hours) may be required for portions of the Leeward Islands. People were advised to continue to pay keen attention to weather reports in the coming days and weeks order to be able to take the appropriate action when called upon to do so by the ODM/Emergency Operations Center (EOC).
“In the meantime, residents and business owners are requested to review their hurricane season preparations, and to make sure their property is storm/hurricane ready. Additional information will be forthcoming from the ODM as the weather system approaches the Leeward Islands,” stated a release.
Maximum sustained winds were near 50mph (85km/h) with higher gusts. Some gradual strengthening is forecast during the next day or so.
The estimated minimum central pressure was 1,002 millibars (29.59 inches).
The depression is expected to produce total rainfall accumulations of three to five inches with maximum totals of eight inches across the northern Leeward Islands, the British- and US Virgin Islands and Puerto Rico. These rains may produce isolated flash and urban flooding, along with isolated mudslides in areas of higher terrain.