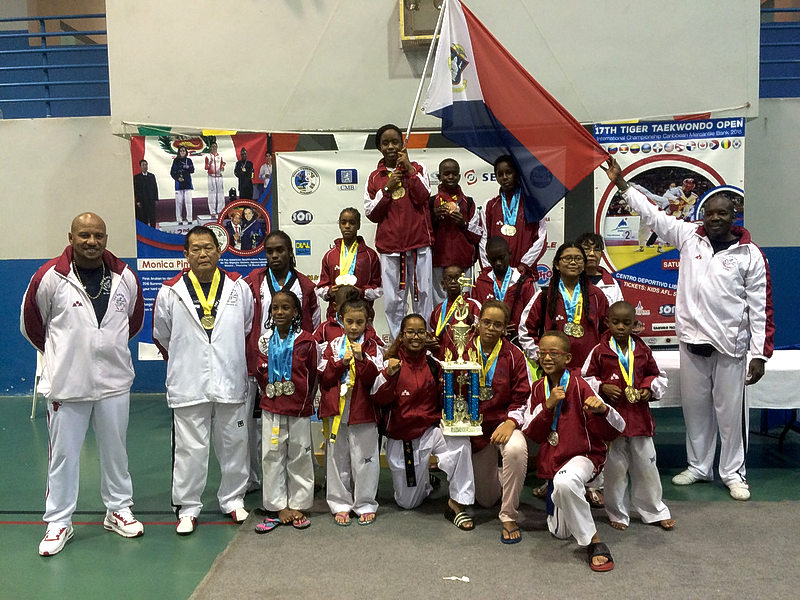 The team also received a trophy as Best Team International.  A total of 410 athletes competed representing Columbia, Dominican Republic, St. Lucia, Surinam, USA, Venezuela host Aruba and St. Maarten.
The athletes competed in both sparring using the Olympic Style World Tae Kwon Do Federation rules with electronic scoring while wearing chest, head and feet protectors.
The athletes also competed in Forms or patterns where the athletes display a series of punches, kicks and blocks.
Grand Master Liu said this kind of international experience is good for the students. “The athletes learned a lot, especially the changes in the international rules and scoring of points.”
Winning two gold medals Destiny Washington and Mira Raghosing.
Winning gold in sparring and silver in forms were Xavier Aventurin, D’Shawn Dollison Joseph, Ivyanne Louisa and Joel Louisa.
Tyrone Washington retuned to the friendly island with three medals.  He earned both a gold and silver in sparring and a bronze in forms.
Caitlin Amatkasmoeri and Emily Leysner earned gold medals in forms and silver in sparring.
Two silver medals went to Mahelia Artilles Gadishaw, Lee-Ann Liu and Andres Patrick.
Silver in sparring and bronze in forms were earned by Ronaldo Candia –Williams and Mekhi Holaman.
Tyrell Pantophlet won two silver medals in sparring and a bronze in forms.
Harder than the competition was the fight to return home. The team boarded the plan in Aruba at 8:00am. They arrived in Curacao a short while later only to face a five hour delay.
Traveling with the team were parents and a support staff which included Liu as head coach;  Rodney Washington, coach; Radha Sanchit, doctor; Paulien Vuijst, therapist and coach, Eugene Juliana, official; Sharon Washington and Betty Liu as coordinators and Leopold Gumbs as photographer.
The trip was made possible by NAGICO Insurances N.V., Euro Caribbean Linkup N.V., Oriental Caribbean Insurances (OCI), Guardian Group – Fatum N.V and Seven Seas Water.