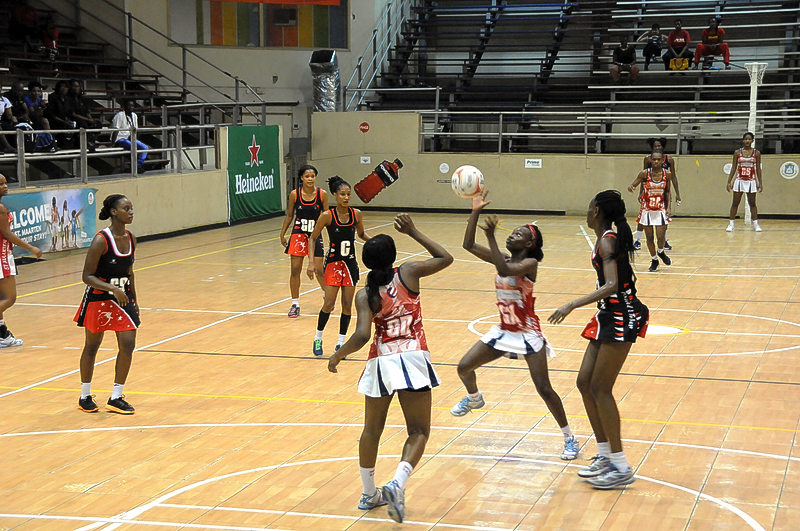 PHILIPSBURG–St. Maarten netballers had to endure back-to-back matches, which resulted in massive losses on Day 3 of the U21 World Youth Netball Qualifiers of the Americas Federation of Netball Association (AFNA) at L.B. Scott Sports Auditorium on Thursday.

Against Grenada, St. Maarten lost 50-17 and against Trinidad and Tobago they fell 72-12. 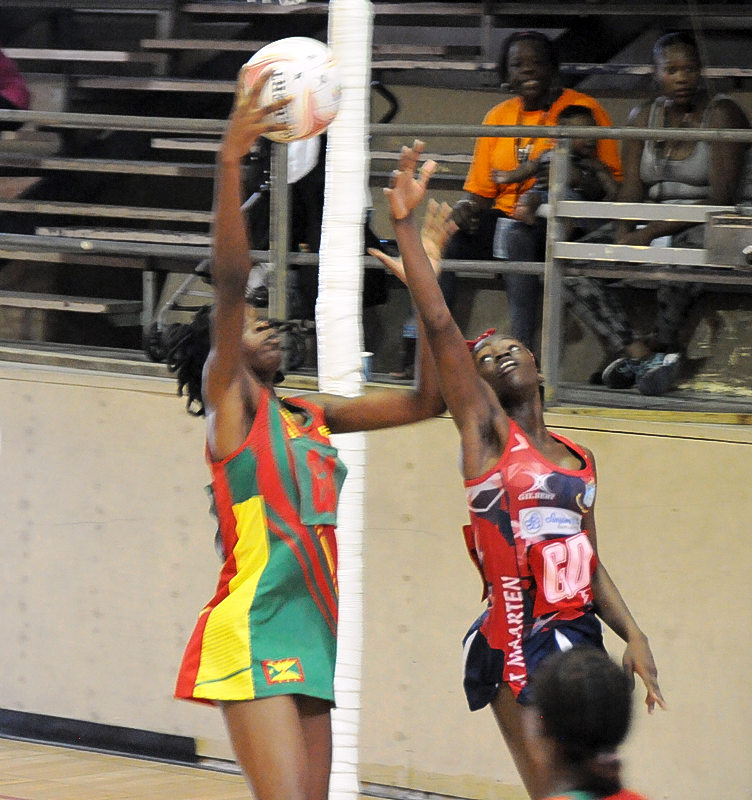 In the second match, which was separated from the first match by about five hours, the local girls looked lethargic as early as the second quarter while Trinidad and Tobago girls ran up and down the court forgetting that they had played earlier in the day too.
Coach Desmond Seymour confessed for the first time, “Oh yes, I think my team was outplayed tonight.” Asked specifically where his team had been outplayed, he answered, “We were outplayed in mid-court. Our Centre, Wing Attack and Wing Defence were unable to bring the ball up-court.”
The coach also believed his team had gotten caught up in the fast pace brand of netball the opposition was playing. “I wanted my team to play the game slower. We were trying to play Trinidad’s game rather our game.” He said.
St. Marten was trailing 14-4 by the end of the first quarter. That would be the most points the home team scored in a quarter for the rest of the match. In the second quarter, they scored three points to Trinidad’s 18, in the third quarter, the host scored three to the visitor’s 16 and in the fourth quarter; St. Maarten scored two goals to a whopping 24 goals from the winners.
For Trinidad, Tashira Hollingsworth finished with 29 out of 35 attempts in the positions of Goal Attack and Goal Shooter. The other contributors were Tiana Dillon with 21 out of 28 attempts as Goal Shooter, Jameela Mc Carty with 13 out of 16 as Goal Attack and Khalifa Mc Collin with nine out of 15 as Goal Attack.
The St. Maarten players faced a well-coordinated defence from mid-court and at back-court from the Calypso Girls and had very few chances at shooting at goal. Trinidad and Tobago had 94 attempts at goal while the home team tried just 17 times. St. Maarten’s Jamaiah Newton-Herbert scored four out of six tries, to register as the top scorer for her team.
In the Grenada match, St. Maarten had difficulties playing effective defence against the taller and more agile opposition. Goal Shooter Carlene Alexander with her tallness shot too many uncontested shots and finished with 33 out 53 attempts. The other scorers were Goal Attack Rashada Cheddick with nine out of 10 attempts and Shakera Fortune at Goal Attack with eight out of 14 tries.
For St. Maarten, Odesa Mc Bean as Goal Shooter made five out 17 shots, Kayla Robinson as Goal Attack registered a 100 percent record after five shots and Newton-Herbert hit seven out 10 attempts.
The results of the other matches played yesterday showed that Trinidad and Tobago clobbered Argentina 87-4; Barbados defeated St. Kitts by 56-20; and Canada registered her first win of the tournament with a 43-17 win over whipping girls Argentina.
The tournament continues today with St. Maarten getting a bye. From 10:30am, Argentina will take on Barbados; from 6:30pm, Canada will do battle against Grenada; and from 8:30pm, Trinidad and Tobago match skills with St. Kitts.