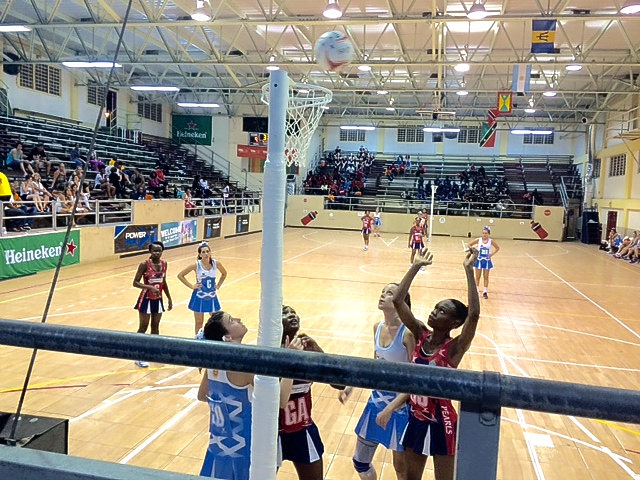 The local girls dressed in red, white and blue trounced the visitors 40-17 in a mostly one-sided affair.
Coach of the local team Desmond Seymour told The Daily Herald he was generally pleased with the performance of the offence from the shooters. “The most pleasing part of tonight’s win was the offence from the shooters. They were outstanding.” said Seymour.
Odesa Mc Bean who played two positions (Goal Shooter and Goal Attack) during the match was the top scorer of the match with 19 out of 28 attempts. Jamaiah Newton who played as Goal Shooter in the first half, scored 13 out of 15 attempts. Newton gave St. Maarten an early advantage by scoring the first four goals and by the end of the first quarter St. Maarten was leading 13-0 with a visibly unwell Newton sinking one shot after the other. Kayla Robinson chipped in with eight goals out of 11 tries.
The Argentineans missed many chances before hitting their first goal. That goal came with just 22 seconds left in the second quarter. The first goal from Argentina brought loud cheers from the crowd which was made up of mostly St. Maarten supporters who were craving a more competitive match for the local girls. The half time score was 22-1.
Argentina came out more aggressive in the third quarter and started shooting the ball better. Even though St. Maarten was ahead with the score on 34 to eight by the end of the third quarter, the guests were beginning to gain some momentum, albeit that the local coaches brought on many of the reserve players for some playing time. A score of 12-7 showed that the eventual losers played better in the third quarter. Argentina then went on to outscore St. Maarten in the fourth quarter at 8-6. The first half blowout; though, was enough to give the home team the huge advantage.
Coach Seymour highlighted one area of concern when he spoke to The Daily Herald, “The girls were a bit nervous. I want them to play their natural game rather than think about the opponent too much.” he opined.
St. Maarten next match is tonight at 8:30 against the St. Kitts U21 team and the coach is hoping that his girls could get rid of the nervousness and come out and beat St. Kitts. “I’m confident that my girls could defeat St. Kitts.” stated Coach Seymour.
Other results from yesterday showed that Trinidad and Tobago, the highest ranked team in this tournament at #9 in the INF World Rankings overpowered Canada for a 69 to 9 win and Barbados beat Grenada by 42 to 20.
The opening ceremony was graced with the presence of Minister of Education, Youth and Sport Silveria Jacobs and President of AFNA Dr. Patricia Butcher who gave brief remarks on the significance of the tournament and welcoming the overseas players and officials.
The qualifiers continue today when Grenada takes on Argentina from 10:30am and then Barbados does battle against Canada from 6:30pm.