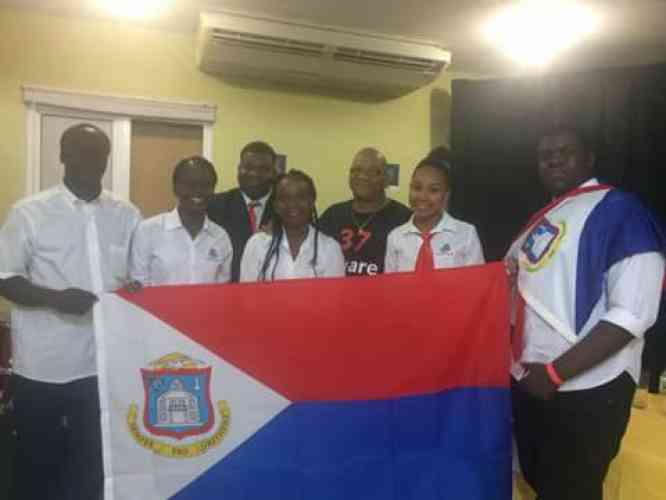 University of St. Martin (USM) student Diandra Marlin; St. Maarten Academy students Dawud Chapman, Imani Henry and Reanna Thomas; and St. Dominic High student Rayjenni Carty represented St. Maarten
The St. Maarten team defeated Antigua on Friday evening while debating the moot “Mental Health issues among Caribbean adolescents have largely been ignored.”
However, St. Maarten placed second in the finals on Sunday evening while debating against Nevis. St. Maarten proposed the moot: “Black people’s suspicion and resentment of white people is justified.”
Also competing in the debate competition were students from Antigua and Barbuda and host country Anguilla.
The local students departed St. Maarten on Thursday and Friday, March 1 and 2, and were expected to return home on Monday, March 5.
The local leg of the debate is coordinated by Hyacinth Richardson Educational Foundation. National Alliance Member of Parliament Hyacinth Richardson is chief coordinator for St. Maarten.
The Leeward Islands’ Debating Competition is an annual event that first took place in 1972. It was founded by George Irish of Montserrat. Traditionally, it brought together sixth-formers from participating member islands to debate issues germane to the region. Today, the debaters are not necessarily sixth-formers, as secondary and tertiary level students who are not sixth-formers have also represented their territories.
The competition has become an important forum, promoting the interaction of young people from across the Leeward Islands as they engage in one of the oldest activities of civilization.
The competition took place over the Easter weekend over the years. However, with the advent of the Caribbean Advanced Proficiency Examinations and the requirement for students to write external examinations annually starting early in May, as well as three internal assessments per subject with an April deadline for submission, the usual date proved less than ideal. The competition was therefore moved to the first weekend in March.