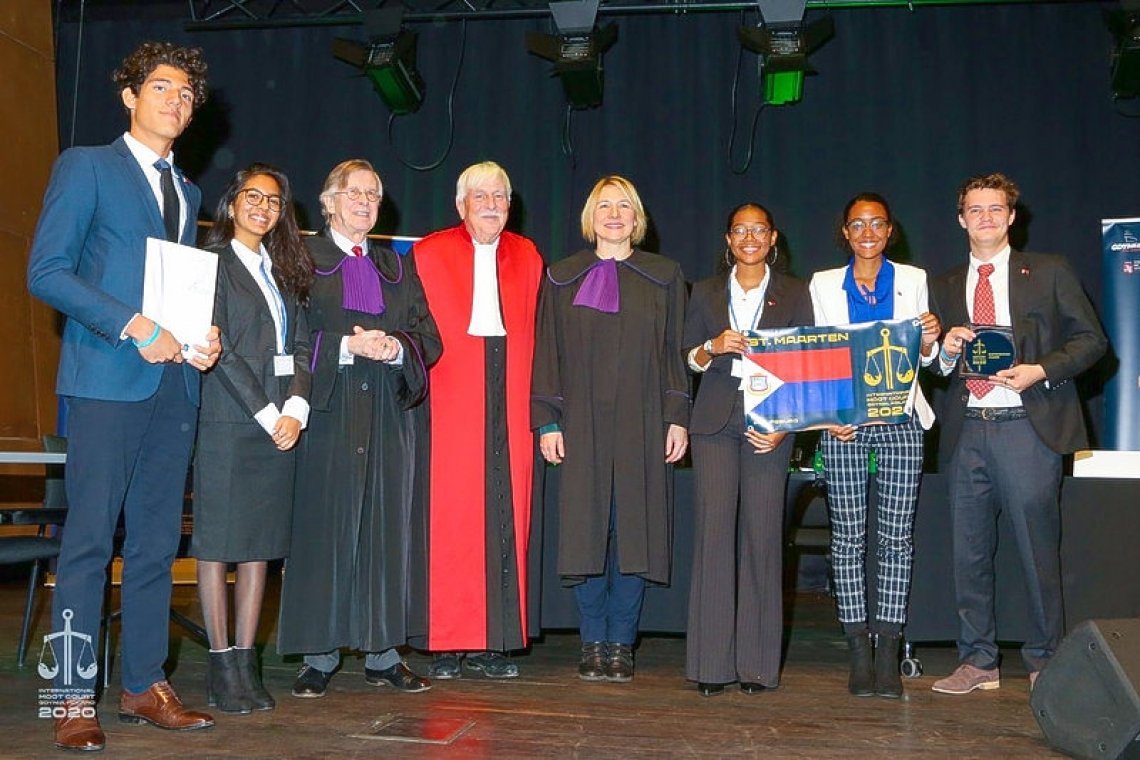 Gathered behind the SXM Moot Court banner are, from left: Ignacio Becerra, Carson Gifford, Yvette Serrate Rosario, Srishti Rajani and Naomi Jankee during the start of the competition at the Pomeranian Science and Technology Park in Gdynia, Poland.

Fourth place is impressive, considering that St. Maarten was not only the smallest in terms of team size, but also geographically.

After three days of competition, the two teams with the highest points competed against one another in the finals. The difference in points between the teams ranked second, third and fourth was very small and after multiple recounts of the points, St. Maarten just barely missed out on making it to the finals.

A Moot Court is a simulated court case and the structure and its process mirror an actual court case. Participants analyse a problem, research the relevant law, prepare written submissions and present oral arguments.

Participants in the competition are tested on their analytical, debating and public-speaking skills and their ability to answer questions from the judges.

The St. Maarten team had done very well all week during the preliminary rounds, making an impression on the judges and other teams.

“It was a tremendous achievement, especially when considering the small pool of students we have to select a national team from, compared to countries like South Africa, who select their team based on a nationwide competition where the best 180 students from all over their country compete in a week-long competition to earn a spot on the national team,” said coach and president of the SXM Moot Court Foundation Nathalie Tackling.

“It goes to show just how much talent we have on this island, that we should continuously strive to cultivate through initiatives such as these. As coaches, we could not be prouder of our students and the capabilities they exhibited during the competition,” Tackling said.

In Poland, the team had the opportunity to compete before a panel of highly distinguished real-life International Criminal Court (ICC) judges and other legal experts. The team competed against groups from all over the world, including Azerbaijan, Bulgaria, Mongolia, Poland, Romania, Russia, Scotland and Venezuela.

The next International Moot Court Competition will take place in 2022. Tackling and her team hope not only that a St. Maarten team will again represent the island that year but also that national competitions between the local high schools will also become more prominent and supported by all stakeholders.

“We want to use our moot court platform to stimulate our St. Maarten youngsters and give them an opportunity to develop skills they can carry with them for the rest of their lives, irrespective of their field of study. Naturally, we also hope that this will lead to more of our students furthering their education,” said Tackling.

“Not all of our St. Maarten youngsters decide to further their studies, and not enough students take up the study of law. This is unfortunate, because the island needs specialists, graduates who have completed a study at an academic level, and at present we are dealing with a deep shortage of locals to fill key positions. With this many vacancies, within government for example, it makes it that much harder for us to innovate and rebuild our country post-[Hurricane – Ed.] Irma.

“The SXM Moot Court Foundation, through its organisation of national competitions as well as participation at an international level, provides an excellent opportunity to develop yourself, to learn from others and come into contact with students from all over the world. We would like to stimulate secondary school students to further develop their skillsets, look ahead and continue their studies,” Tackling stated.

The SXM Moot Court Foundation is a non-profit foundation, with all board members and coaches donating their time to organise, coach and raise funds to carry out this initiative.

“This has so far only been possible with the tremendous support we receive from both the private business sector as well as private individuals. We would like to extend our sincerest gratitude for their continued support for what we do and drive to help create these opportunities for your youngsters. We hope to be able to continue to count on these contributions and keep the initiative going for years to come,” said Tackling.