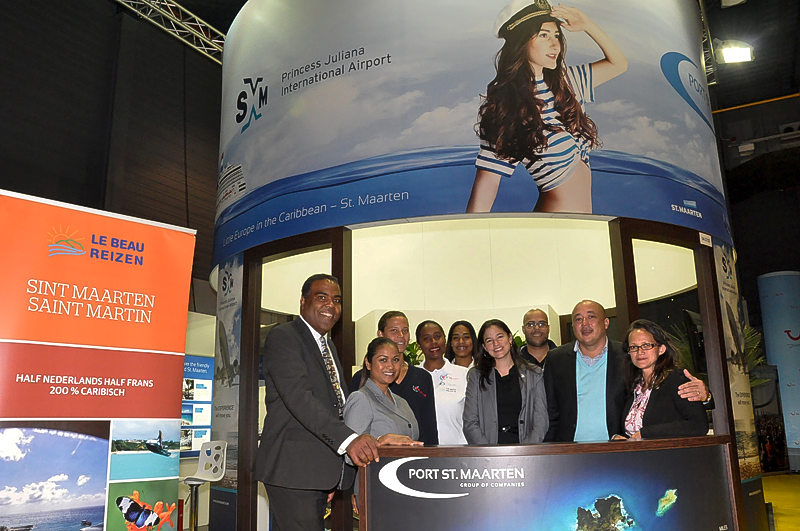 UTRECHT–Sticking to his promise to commit to the Dutch Holiday Fair for five years, St. Maarten Port Director Mark Mingo and his team are back this year. With a larger stand, and more importantly, together with Princess Juliana International Airport SXM.

The team at the stand is impressive: besides Mingo there are Ichel Mouslikan, Alexander Gumbs, Ariana Rivers, Sharidien Cijntje, Addison Richardson (also known as Shadowman) of the Port, Chandra Offringa and Suzy Kartokromo of the Airport, and Marlon Beauperthuy, Shannakka Cannegieter and Suzette Moses of Le Beau Travel and Maduro.

The highly visible, large stand of the Port that is used for the regular trade fairs in Europe was taken to Utrecht where some adjustments were made for the Holiday Fair (“Vakantiebeurs”), including the addition of the Airport logo.

Both Mingo and Manager Marketing and Customer Service of the Airport Suzy Kartokromo made an appeal for an active role of the St. Maarten Tourism Authority (STA) at the Vakantiebeurs.

“The STA has to be leading in this destination promotion. I hope that the STA will come off the ground and that next year it will be part of the Vakantiebeurs. We need that joint effort,” said Mingo. “We are positive that this is the start of a long term exercise with as the ultimate result the active participation of the STA,” said Kartokromo.

Kartokromo said about the first time of the Airport at the Vakantiebeurs: “It is important for us to be here. We have been taking on a very proactive approach to attract more carriers and this is a useful addition to that approach.

The fact that there are not many airlines at the Vakantiebeurs as there are more destinations was not considered an issue. “It is important to promote St. Maarten as a destination. Tourism is everyone’s business. It is vital that we keep the destination in the minds of people,” said Kartokromo.

Both Kartokromo and Mingo said they were very happy about the cooperation between the harbour and the airport. Their joint participation at the Vakantiebeurs can be considered a follow-up to the successful joint effort to get Pullman Tours to homeport in St. Maarten with XL Airways supplying the airlift out of Paris, France.

The joint stand at the Vakantiebeurs drew quite some attention on the first day of the Vakantiebeurs on Tuesday. The performance of Addisson “Shadowman” Richardson was much appreciated by the visitors. While at the fair, Richardson, besides his regular performances, will also promote the Walter Plantz Square in Philipsburg.