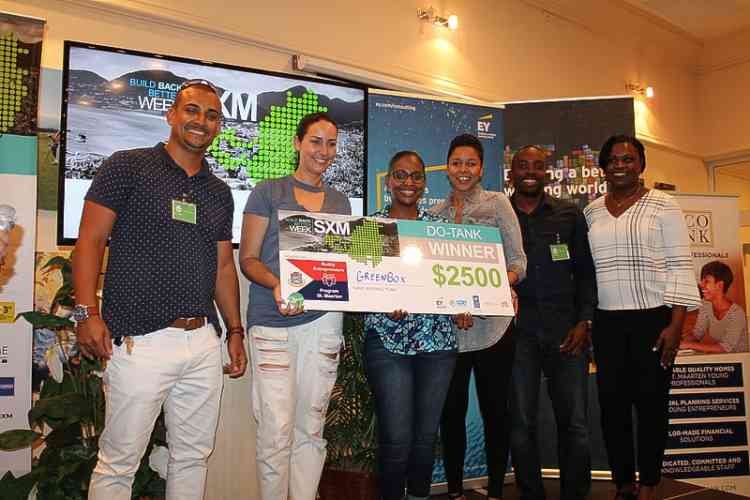 PELICAN–A St. Maarten team whose project “Green Box” tracks and rewards people for getting rid of their waste through an app won the first prize last night at the awards ceremony in Simpson Bay Resort for the Do-Tank Hackathon, a creative international contest to build back a better St. Maarten.

The “Green Box” team won US $2,500 from the Buddy Entrepreneurship programme St. Maarten to start up their idea, a mentorship, and one year’s worth of free advertising on Island 92 Radio. The team comprised Jesse Peterson, Jennifer Carty, Sabrina Jno Baptiste, Lela Simmonds and Member of Parliament (MP) Ardwell Irion.

“We want to start recycling and solve the dump situation, and what better way to do that than by rewarding people for doing it,” Green Box’s Jesse Peterson said. “That’s our main mission. We believe in a cleaner island, a cleaner society. The first step is awareness, getting rid of plastics and glass from home. We will use the prize money to start the company and get started as soon as possible.”

Some 21 teams competed in the contest to come up with winning ideas for a more resilient future for St. Maarten. A collective burst of creativity and brainstorming among teams took place over a period of just 48 hours to culminate in the professional presentation of all the projects on Sunday evening. Teams, some of which were mix of overseas participants and St. Maarten residents, started working on their ideas Saturday morning.

It was a remarkable achievement, given that all teams had to condense their hard work into a timed three-minute presentation of each project before the judging panel. The five judges were representatives of United Nations Development Programme (UNDP), Ernst and Young, St. Maarten Hotel and Tourism Association (SHTA), the local Chamber of Commerce and the World Bank youth network.

The top prize was presented to “Green Box” team by Prime Minister Leona Romeo-Marlin.
“It’s a great initiative, because you have a proper balance between millennials, X and Y generations, baby boomers, all coming together and coming up with creative and sustainable ideas that will help develop St. Maarten especially at this stage,” Marlin said in her remarks.

“We’ve created a great energy here and now we must take this energy and put it into actual projects. A list of projects can be presented to Government responsible for the projects we are doing with the World Bank to see how they can fit in to our early recovery projects or even to fit into different stages of projects that fall under the project bureau of Government.”

Joining the Prime Minister from the Department of Interior and Kingdom Relations were Department Head Marc Arnold and Project Manager Andrea Ortega. And from the Ministry of Tourism, Economic Affairs, Transport and Telecommunications (TEATT), Acting Head Jude Houston. Minister of Education Jorien Wuite was present earlier but could not stay.
The initiation of Build Back Better Week SXM was organised by the Center of Excellence (COE) for the Sustainable Development of Small Island States.

COE is a United Nations Development Programme (UNDP) based in Aruba. It organised the Build Back Better Week SXM in conjunction with partners EY Caribbean, Dutch Caribbean Chambers of Commerce, Present Your Start-Up and 360 Degrees of Innovation.
“We were asked to come to St. Maarten soon after the hurricanes to see what we could do to help. We didn’t want to write another report, but wanted to bring people together who really wanted to help,” explained COE Manger and organiser Arno Boersma. “That resulted in several other organisations joining us. Many of the participants were individuals who ended up joining teams, all strangers.

“It was fascinating to me to see strangers who are asked to work all weekend, for no money, to find solutions for St. Maarten. Some teams were working ’til midnight. Even the ones that don’t win tonight, I’m sure those ideas will become start-ups to be implemented and undoubtedly many of the participants are going to stay connected.

“The number of teams was way more than we expected. We were thinking we would get about 10 teams and have five-minute pitches. But we had to reduce that to three minutes with 21 teams to get through. The enthusiasm was much higher than we expected.”