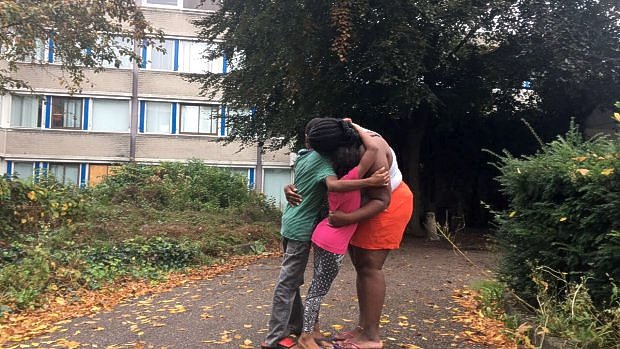 HAARLEM–A group of thirteen persons from St. Maarten, who fled after Hurricane Irma partially destroyed the island earlier last month, are stranded in an asylum seekers centre in Haarlem. They have to leave but have nowhere else to go, one of them told RTL Nieuws. It concerns five children and eight adults.
Upon their arrival in the Netherlands at Amsterdam Schiphol Airport they identified themselves as evacuees, after which the municipality of Haarlemmermeer provided them shelter at a hotel.
Thereafter, they were being transferred to an “emergency provision” in Haarlem, being the asylum seekers centre in the former Boerhaave clinic.
Keisha, one of the evacuees, says they have to leave there now. If they do not leave voluntarily, Keisha told RTL Nieuws, they may possibly be removed by force.
“But I am sitting here with my two children. I have nowhere else to go. We have nothing left in St. Maarten,” she said.
A spokesperson for the city of Haarlem said the St. Maarteners had heard that they would receive aid in the Netherlands. “That is not the case, but we have the policy that no one should be sleeping in the streets. Therefore, we have made this temporary emergency solution,” the spokesperson said.
Persons who fled St. Maarten must provide their own shelter, the Ministry of Home Affairs and Kingdom Relations confirmed to RTL. “We stress that if people come to the Netherlands it is their own responsibility to arrange accommodation,” the Ministry said.
Sella Salmoune, who is also part of the group, says she is in a lot of “commotion” since a social worker told them they would be left to their fate.
Salmoune was raised in the Netherlands. “I have nothing in St. Maarten. Holland is my country, but now they are telling me that I have to seek help in St. Maarten,” she told RTL.
The same goes for two other group members, who also resided in the Netherlands for a long time. “We are in a lot of fear here,” said Salmoune.
A spokesperson for the Ministry of Home Affairs said that “in very acute cases” the Ministry may be looking into the possibilities to provide aid. “In exceptional cases we are willing to find a solution in cooperation with a municipality,” the spokesperson said.