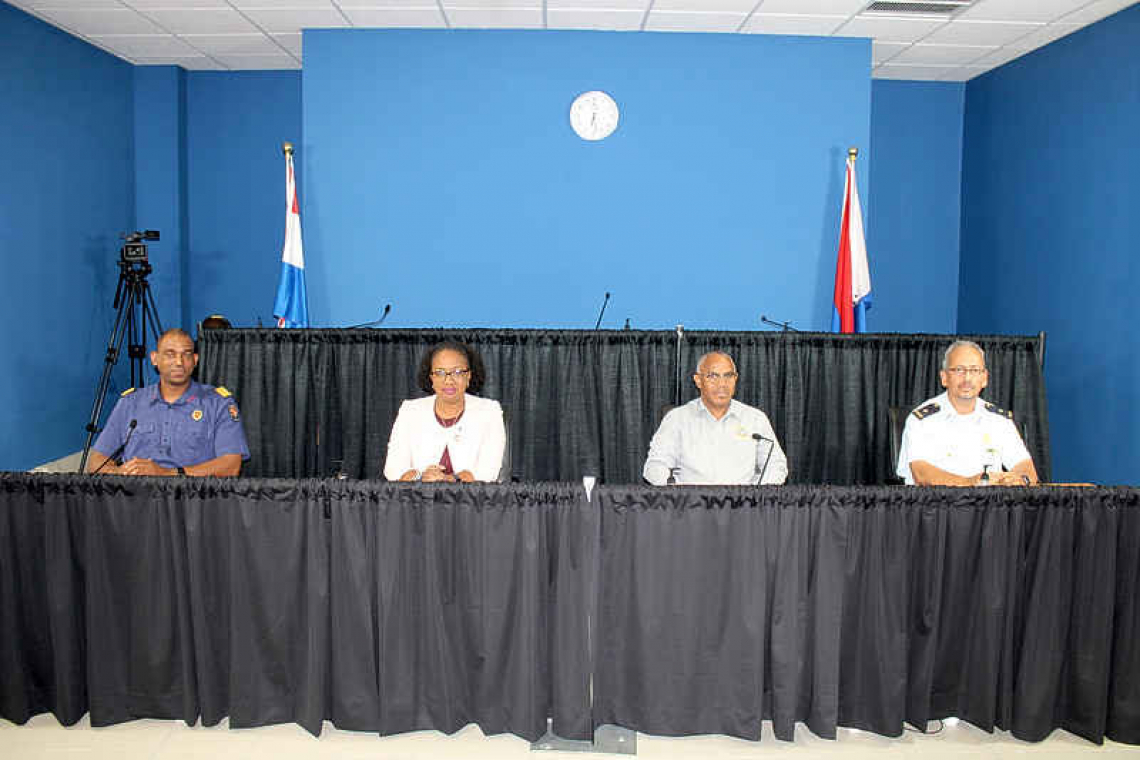 PHILIPSBURG–Depending the information shared at 9:00am today, Friday, the people of St. Maarten are advised not to leave their homes today. Tropical Storm Fiona is expected to pass 75 miles south of St. Maarten with winds of 70 miles or more per hour (mph), with risky gusts of wind, accompanied by heavy rainfall.
Prime Minister Silveria Jacobs announced on Thursday afternoon that she would address the nation at 9:00am Friday to share the latest meteorological information from 5:00am. “Stay tuned to our broadcast that will be updated from the Meteorological Department of St. Maarten (MDS) for up-to-the-minute preparation tips as well as the latest information.”
Jacobs advised the nation to remain vigilant and be prepared. “Panic does not help; calm is always best in these situations. Treat each other with grace. Be safe, St. Maarten.”
All schools are closed today. During the Prime Minister’s national address, the public will be notified whether, and when, businesses and government operations will close in advance of the storm’s arrival, as the situation remains fluid and further changes can occur.
Tropical Depression #7 was upgraded to Tropical Storm Fiona on Wednesday night and MDS issued a Tropical Storm Warning for the country. A Tropical Storm Warning means that tropical storm conditions can be expected within 36 hours. According to MDS on Thursday, Fiona is expected to pass 60 miles south of the country on Saturday, but impacts are expected by Friday afternoon.
Fire Chief and Office of Disaster Management (ODM) National Disaster Coordinator Clive Richardson is calling on residents and the business community to be prepared.
Residents and businesses along the country’s coastal areas or flood-prone environments should take action to protect property, as such properties could be inundated by possible storm surge.
MDS Head Joseph Isaac said that Tropical Storm Fiona likely will be similar to Tropical Storm Gonzalo, which left a trail of destruction on the island in 2014. There was one death at the time – an elderly man who was on board his boat in Simpson Bay Lagoon was killed.
ODM is advising boat owners and mariners to implement their hurricane season action plans to safeguard their vessels, and to seek shelter on land.
Maximum sustained winds have increased near 60mph with higher gusts possible. Fiona is moving towards the west near 14mph and is expected to cause sea conditions to deteriorate and to impact the island with high winds, thunderstorms and 3-6 inches of rain with the subsequent risk of flooding and rockfalls.
“The fact that the circulation of winds will be to the south of the island and we are going to be in the northern quadrant, that is a concern that we really need to take seriously,” Isaac said, indicating that the storm covers a distance of 140 miles. “There is a possibility that just after the centre passes us, it could slow down. If that happens, the storm could actually intensify.”
There is a possibility that St. Maarten is in for a long weekend, Isaac said. “There could be impacts going into Sunday.”
St. Maarten Police Force KPSM and the Ministry of Public Housing, Spatial Planning, Environment and Infrastructure VROMI are taking measures ahead of approaching Tropical Storm Fiona to ensure public safety. Barricades will be placed to prohibit or limit access to in flood-prone areas and roads in the event of heavy rainfall. Areas include the Cul-de-Sac Basin, low-lying areas in Philipsburg and its surroundings, low-lying areas of Simpson Bay and Mullet Bay.
Police forewarn the public – pedestrian or motorists – that removing or displacing barricades will constitute a criminal offence. Anyone who takes the risk to access these flood zones will do so at their own risk.
“Please stay indoors if you don’t have to go out,” Acting Chief of Police Benjamin Gout said, warning not to underestimate the situation due to Fiona being a tropical storm. “It is still dangerous,” Gout said.
Residents and the business community are advised to continue to pay keen attention to weather reports from MDS in the coming hours to be able to take the appropriate action when called on to do so by the ODM/Emergency Operations Center (EOC).
In the meantime, residents and business owners are reminded to review their hurricane season preparations and to make sure their property is storm/hurricane ready.
Additional information will be forthcoming from the ODM as Tropical Storm Fiona approaches the Leeward Islands.
The plan is set for the opening of the hurricane shelter at John Larmonie Center in the event of extreme situations. If persons need to access the shelter, they are requested to walk with supplies, such as water, snacks and/or necessities like medication, etc.
The community is urged to learn more about hurricane hazards and how to prepare for a storm/hurricane strike by visiting the Government website
www.sintmaartengov.org/hurricane where you will be able to download your “Hurricane Season Readiness Guide” and “Hurricane Tracking Chart”.
Listen to the government radio station SXMGOV 107.9FM for official information and news before, during and after a hurricane.
For official weather-related information, check out the MDS website
www.meteosxm.com or visit its social media page
Facebook.com/sxmweather/