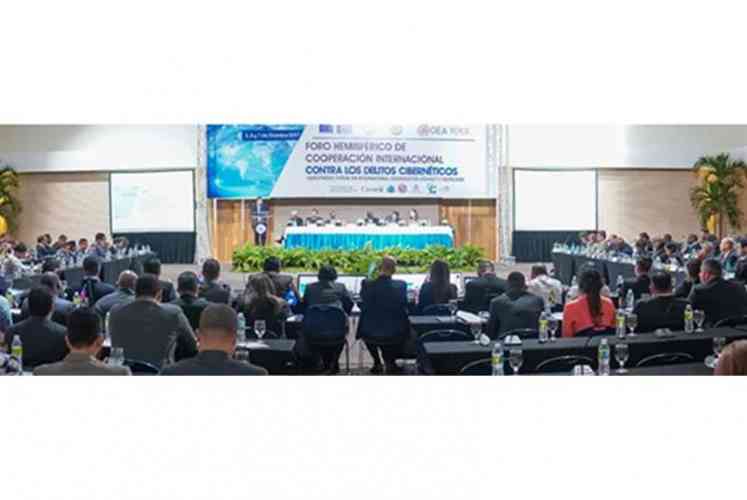 A press release from the Justice Ministry on Thursday stated that the forum was aimed at permitting participating countries to make better use of international organisations’ capacity-building programmes to enhance cooperation and synergies between international organisations and initiatives, and to share experience on the strengthening of capacity-building for criminal justice authorities.

Cybercrime is a fast-growing area of crime. More and more criminals are exploiting the speed, convenience and anonymity of the Internet to commit a diverse range of criminal activities that know no physical or virtual borders, cause serious harm and pose very real threats to victims worldwide.

The release said different international sources have indicated that cybercrime is costing the world economy up to US $500 billion per annum. Cybercrime and issues related to electronic evidence undermine the social and economic development opportunities of information technologies as well as human rights, democracy and the rule of law. A more effective criminal justice response and cooperation at all levels are needed; it was stated in the press release.

Legislation on cybercrime and electronic evidence is the basis for such a response. “An increasing number of countries in the Americas have adopted or, like St. Maarten, are in the process of adopting domestic legislation, using the Budapest Convention on Cybercrime as a guideline,” according to the release.

“This convention on Cybercrime of the Council of Europe is the only binding international instrument on this issue. Its main objective is to pursue a common criminal policy aimed at the protection of society against cybercrime, especially by adopting appropriate legislation and fostering international co-operation.

“The convention serves as a guideline for any country developing comprehensive national legislation against Cybercrime and as a framework for international cooperation between state parties to this treaty. It is the first international treaty on crimes committed via the Internet and other computer networks, dealing particularly with infringements of copyright, computer-related fraud, child pornography and violations of network security. It also contains a series of powers and procedures such as the search of computer networks and interception.”

Also, with the growing relevance of information and communication technologies for societies around the world and thus their vulnerability to threats such as cybercrime, a major capacity-building effort is required to enable criminal justice authorities to investigate, prosecute and adjudicate offences against and by means of computers as well as other offences entailing electronic evidence, the release said.

Capacity-building is an effective way to permit countries to strengthen legislation, institutional capacities and cooperation at all levels. An example of good practice and offer of further support is the project of the European Union and the Council of Europe on Global Action on Cybercrime Extended (GLACY+).

Combating cybercrime is not a responsibility of the public sector alone, but also of the private sector.

“It is important to promote a platform for high levels of cooperation between the private and public sectors. Currently, geopolitical changes, the acceleration of technological developments and the evolution of attacks have caused a response gap between policies and real-time effective execution.

“All parties will need to participate in the creation of a pragmatic legal framework that will permit law enforcement to perform their duties while protecting individual privacy and facilitate cooperation between countries,” the release stated.

The International Criminal Police Organisation Interpol is focusing resources to expand its information-sharing agreements with the private sector to produce actionable intelligence for member countries. Participating countries to the Cyber Surge urged Interpol to continue producing and disseminating intelligence through its official channels.

“Cybercrime-related cases are complicated and require tenacity, resources, intelligence, patience by the investigators, and coordination between the different governmental institutions. This will seek to ensure the success of tracking, investigating, capturing and processing of criminals.

“Occasionally, criminals make mistakes. Those mistakes in turn can be used for the investigation and prosecution of said criminals and bring them to justice. International cooperation in cyber-related cases is very important for the exchange of experiences and technical assistance. In particular, in cases that have not been encountered before,” the release said.

It is the responsibility of investigators and prosecutors to explain the technical aspects of complex issues in clear and simple terms to judges and juries, the release said. As electronic evidence is increasingly stored on servers in the Cloud, specific measures are needed to secure such evidence for criminal justice purposes.

“There is a need to reassess and renew the current international legal frameworks, to offer a forum for broader international discussion expressing an outlook towards increasing and advancing international law-enforcement and judicial cooperation among the national authorities and between international and regional organisations.

“These developments should consider the influences of new and emerging issues in respect of international law-enforcement and judicial cooperation in criminal matters, alongside with recommendations on capacity-building. These recommendations should show an equal concern for the situation in countries at different stages of development in order to avoid a chaotic future.”

There was agreement amongst participants on the need to work on capacity-building strategies for operators of the criminal justice system about the challenges of computer-related crime and digital evidence, to promote interdisciplinary courses of legal and technical content, to promote “training of trainers” in the different countries of the region, to promote a better use of the resources for international cooperation, for acknowledgement of the importance of the creation of special prosecution offices to deal with cybercrime and to promote joint activities and links among special prosecutors’ units at a regional level.

“It also acknowledged the need of new criminal procedure laws regarding digital evidence and the creation of procedural powers. It recommended the use of the Budapest Convention as a guideline. It accepted the urgent need to work on new rules (at the international and national level) regarding trans-border access to data and data in the Cloud.

“Further, it was considered important to include an additional protocol to the Budapest convention regarding data preservation and production search and seizure orders when data is in another jurisdiction,” the release said.