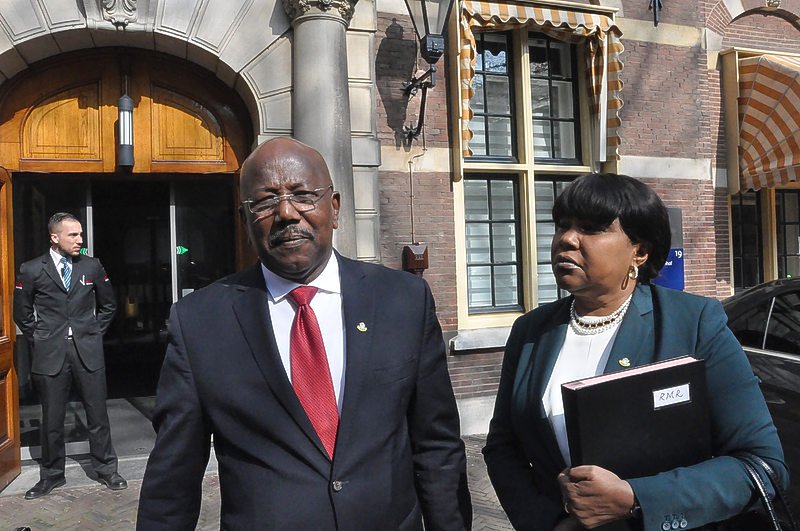 ~Marlin: The Hague wants to punish us~

THE HAGUE–The St. Maarten Government will make use of the so-called fortified crown appeal at the Council of State in an effort to get out of the impasse with the Dutch Government about the interpretation and execution of the May 2015 protocol to strengthen the law enforcement sector and to establish an Integrity Chamber.

St. Maarten Prime Minister William Marlin announced this at a press conference in The Hague after attending Friday’s meeting of the Kingdom Council of Ministers where the decision was taken to give St. Maarten an instruction to install the Integrity Chamber. He said the instruction was unnecessary and claimed that The Hague wanted to punish St. Maarten.

The May 2015 protocol signed between the Netherlands and St. Maarten includes a dispute regulation similar to the one in the Kingdom Law Financial Supervision. This means that parties can turn to the Council of State for a (partly) binding advice.

Marlin said that he announced during Friday’s meeting of the Council of Ministers that St. Maarten would be making use of this possibility. “There is a fundamental difference, an impasse about the interpretation and execution of the protocol,” he said.

Marlin said there was no reason to give St. Maarten an instruction, because the country has been addressing the issue of integrity. He said an instruction based on the Kingdom Charter was only justified if the country didn’t offer any redress and the situation had become untenable.

“The Netherlands doesn’t have the right to intervene just because it thinks that something is not good. We have not stood still before and after the protocol, and we have implemented measures. The improvements in the area of integrity are a work in progress,” he said.

The Dutch Government seemed hell-bent on giving St. Maarten an instruction and was not willing to listen to St. Maarten’s reasoning as to why the instruction was unnecessary, said Marlin. His meetings with Dutch Prime Minister Mark Rutte and Minister of Home Affairs and Kingdom Relations Ronald Plasterk on Thursday confirmed this unwillingness to have a sensible talk, he said.

“Prime Minister Rutte was very agitated. He didn’t want to talk. He said that St. Maarten should stop whining and that the instruction would be issued. He said that if we didn’t like it, we should get out of the Kingdom. His attitude was I am the boss and you have to obey. If the Netherlands has no more patience with St. Maarten, it is not our fault because we have stuck to the protocol,” said Marlin.

Marlin said that it was the Netherlands that had not adhered to the protocol by appointing a quarter master for the Integrity Chamber one and a half year after the agreed upon date and by not providing the reinforcements for the St. Maarten Police Force and Pointe Blanche Prison. “We have received no support, none whatsoever. The only thing that the Netherlands wants is an Integrity Chamber.”

In his opinion it was “totally incomprehensible” that this Dutch Government with a lame duck status “forced through” an AMvRB. “It would have been a gesture of good governance if this government had left the matter to the new government. Especially now that we want to incorporate the Integrity Chamber into the St. Maarten General Audit Chamber,” he said.

Asked about the option of still reaching a consensus with The Hague, Marlin said that this was not possible if the Netherlands didn’t want to talk on the basis of equality. “The Hague only wants to impose things on us, take decisions for us on matters that concern us. We should not be treated as a colony by the motherland who determines what happens.”

As for Rutte’s remarks about getting out of the Kingdom, Marlin said: “The Kingdom doesn’t belong to the Netherlands or to Mark Rutte. It belongs to the citizens.” He said there were people who would like to see St. Maarten leave the Kingdom, even though that is not what the people had voted for in past referenda. He said that personally, he was not against independence for St. Maarten because it offered the opportunity to deal with other countries on equal footing.

According to Marlin, the Dutch Government used the integrity reports selectively and wanted to “punish St. Maarten.” He accused The Hague of “continuously attacking” St. Maarten, “meddling” with the island’s autonomy and not allowing St. Maarten to be a country or act as one.

St. Maarten currently doesn’t have a member on the Council of State for the Kingdom. This position has been vacant for several years. Marlin said that a person living in the Netherlands with affinity of St. Maarten had been approached by his government. “The person asked a few days to consider. We hope it will be a yes.”

Marlin said he had much confidence in the ruling of the Council of State on the fortified crown appeal regarding the May 2015 protocol. He said that at least the Council of State gave objective advice based on the Charter, contrary to the Dutch Government, which in his opinion, “didn’t play a fair game with St. Maarten.”