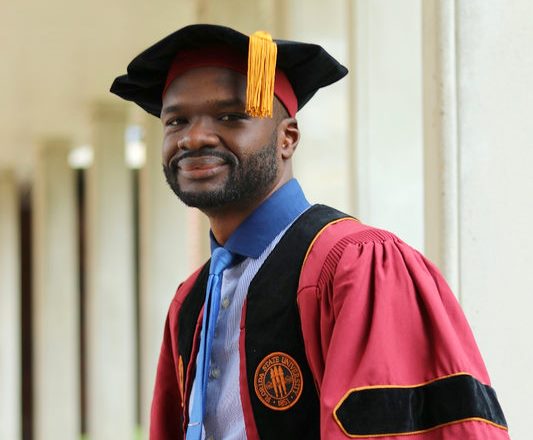 PHILIPSBURG–St. Maartener Martin Kenneth Brown, from Middle Region, earned his Ph.D. in Computer Science at Florida State University (FSU) in Tallahassee, Florida, when he graduated on December 16, with a 3.83/4.0 Grade Point Average (GPA).

Brown is the youngest of six sons of Charles Brown and Maria Brown of Middle Region. Before graduating, the 32-year-old defended his doctoral dissertation in the area of computer architecture under the direction of Professor Gary Tyson, entitled: “An Evaluation of an Android Benchmark Suite Exposing Android System Complexities using Region-based Caching.”

His motivation for this work was the rise of smartphones coupled with smartphone consumers’ desire for improved battery life. “One or two decades ago, we used to purchase phones that could go over a week without recharging, but had limited features. Today we’re purchasing smartphones that have unlimited features, but their batteries only last us about a day or two,” he said. “Surveys show that long-lasting battery life is the most important feature requested by consumers.”

Brown also holds a Master of Science in Software Engineering and a Bachelor of Science in Computer and Information Systems earned in 2010 and 2006 respectively. He was inspired to pursue a Ph.D. in computer science after gaining teaching experience and observing the careers of his professors.

“I was given the opportunity to teach college students on several occasions, and I found that I had a passion for it. I also saw that my professors on some level were their own bosses, being able to choose and change what areas of computer science they wanted to focus on. I desired that freedom as well.”

Martin graduated from Milton Peters College (MPC) in 2001, and enrolled in the Computer and Information Science (CIS) programme at Florida Agricultural and Mechanical (A&M) University in 2002. In 2005, he was employed by the CIS Department as a tutor and research assistant. During his summer breaks, he worked in St. Maarten for PC Repair Plus, F.W. Vlaun and B.I.T.s’ for Biz. “I’m grateful to these companies for giving me these opportunities to build my résumé and gain valuable experience, and for my friends who pointed me in their direction.”

In 2006, he used the web development experience that he gained at B.I.T.s’ for Biz to land a job at Web Scribble Solutions. There he developed a customisable social networking web app that allowed others to launch their own social networks.

After a year, he moved back to St. Maarten and found employment as a Software Developer under Access NV, where he helped to develop a job-placement application for the Department of Labour Affairs. Six months later, he started working as an IT Technician at M.V.G. Technology. Here he gained skills that he still uses today to repair his friend’s computers. Shortly after this, he was offered a scholarship and employment by Florida A&M University to enrol in the Master of Science in Software Engineering programme in 2008, he and several of his fellow St. Maarteners. “We performed well in the Bachelor’s programme and were able to reap this opportunity to have our Master’s degrees paid for by FAMU.”

That’s where he met his wife Sherene Campbell, a native of Jamaica, while she was in her last semester of the Bachelor of Science in Computer Engineering programme. After graduating with his Master’s with a 3.92/4.0 GPA, he pursued his Ph.D. in Computer Science at Florida State University. Like his Master’s, his Ph.D. was sponsored by the computer science department in the form of research and teaching assistantships.

“Science, technology, engineering and math are excellent fields to be in because, compared to other fields, it is relatively easy to gain scholarships if you have a good academic record, because these fields are well-funded.” Since 2008, Martin has interned with Sun Microsystems, Medtronic and AMD Research.

Asked how he feels about this accomplishments, Brown said: “I feel blessed and grateful. The Bible says that no one can receive anything unless God gives it to them. God has provided me with so many people along the way to help me get to this point.”

His advice for youths is: “You need to put your best effort in everything that you do; that way you will find something that you are great at. Once you find it, pursue it, and you will find opportunities knocking at the door as others see the passion that you have for your work. Take advantage of those opportunities, and always be humble, always ask those who have been there before you for advice. The Bible says that a lack of counselling causes people to fall, but that many counsellors bring the victory. If you ask smart people for advice, they will admire that and often happily give it to you freely.”

So where does he go from here?

“My wife and I currently both work as engineers for Cummins Inc., an American engine manufacturer. We do miss our homes and the Caribbean lifestyle immensely, but currently we have the opportunity to gain valuable experience in technical leadership and management that would make us better prepared to serve our countries later on. We want to be leaders when we go back home, helping to create jobs on the island and helping to prepare the children to be the leaders of tomorrow.”

Martin has been working as a Software Engineer at Cummins since April 2016. He is currently part of Cummins three-member Telematics group that is developing an Android and iPhone app that will allow truck drivers to update the software on their engines.

“The current procedure requires truck drivers to leave their trucks in the shop overnight until a service technician installs the software update. This new procedure will allow them to install the software update themselves with the click of a button on their smartphones, while the engine is turned off.”

“We want to use everything that God has blessed us with for His glory. Serving others, serving our employers and serving our communities. Without God, we would have nothing at all.”