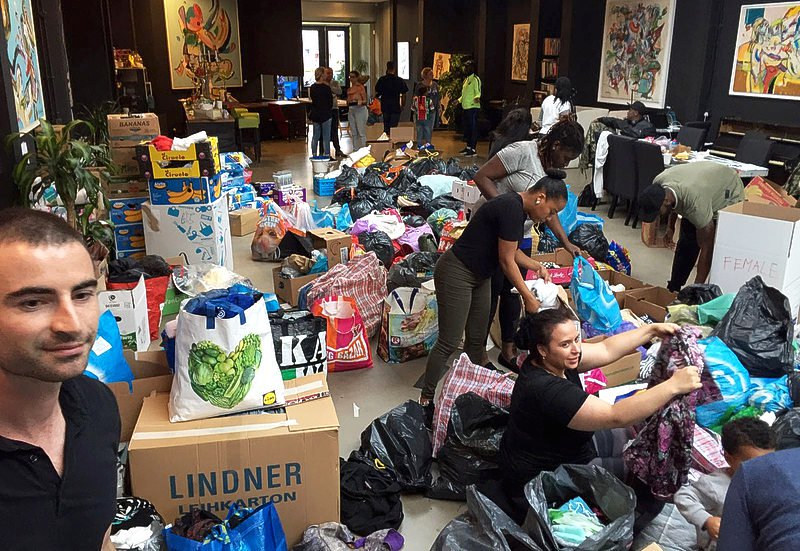 THE HAGUE/ROTTERDAM–Two sizable initiatives by St. Maarteners in the Netherlands have been collecting for their people back home, each in their own way. Make St. Maarten Great Again, started by Patrick Marcelino, focuses on the collection of goods, while Rebuild St. Maarten of Cyriel Pfennings and John Sandiford try to raise as many funds as they can so they can offer help over a longer period.

Make St. Maarten Great Again was born directly after the passage of Hurricane Irma. St. Maarten businessman Jaap van den Heuvel said that when he spoke to construction worker Marcelino the latter said that he wanted to go directly to his island to assist.

“Aside from the fact that it is impossible to get into St. Maarten at this time, I told him it was a better idea to do something in the Netherlands to help his fellow St. Maarteners,” Van den Heuvel told The Daily Herald. Businessman Marc van der Bilt joined and the three set to work to collect good throughout the Netherlands, setting up 50 collection points.

With a team of some 30 persons, headed by Marcelino and coordinator Cerasela Somersall, goods are being collected, sorted and checked at a large warehouse in Rotterdam. They are working around the clock. Clothing, toilet paper, canned goods, water, toothpaste, soap and many other items are coming in. The response of the public is terrific, said Van den Heuvel. “People exiting supermarkets come directly to us with items that they have just bought.”

The organisers have been in contact with several larger Dutch companies for assistance. Leen Bakker and Kwantum immediately offered to help, said Van den Heuvel. The company is filling several containers with spare beds and furniture, while transport company GLE offered containers.

Talks are ongoing with several other companies, for example with supermarket chain Albert Heijn. “People are without income and have no money to buy groceries. It is of the utmost importance that we don’t forget the less fortunate people.”

The team of Make St. Maarten Great Again (www.makestmaartengreatagain.com) is busy arranging transport to the island, the most costly part of the collection drive. The organisation does not work with monetary donations. Donated money is going to the Red Cross where people are also referred to if they want to make a financial donation.

Rebuild SXM also started right after the hurricane. “John and I came together and we said we have to do something,” Pfennings said in an interview. A foundation was quickly set up. The strong point of RebuildSXM? “We are from St. Maarten. We have a large network and we know exactly what is where.”

The foundation and its nine-member support team want to work on the longer term, assisting in the island’s reconstruction. “The Red Cross is doing fantastic work, but they are not there for the long run. We are,” said Pfennings. He said he had already received numerous calls of people, organisations and companies who want to help reconstruct homes.

There are many initiatives to help rebuild, but there isn’t a central platform to report and coordinate these. Pfennings said the foundation tries to fill the gap of the current absence of a central coordination point. “We will collect all that information. The reconstruction is a long term affair and we want to play a facilitating role in that.”

The website www.rebuildsxm.com is up and running where all information can be found. Donations can be made directly via the website. Pfennings promised that the foundation would work fully transparent. “We hope to offer a lot of help of which we will inform the people.”