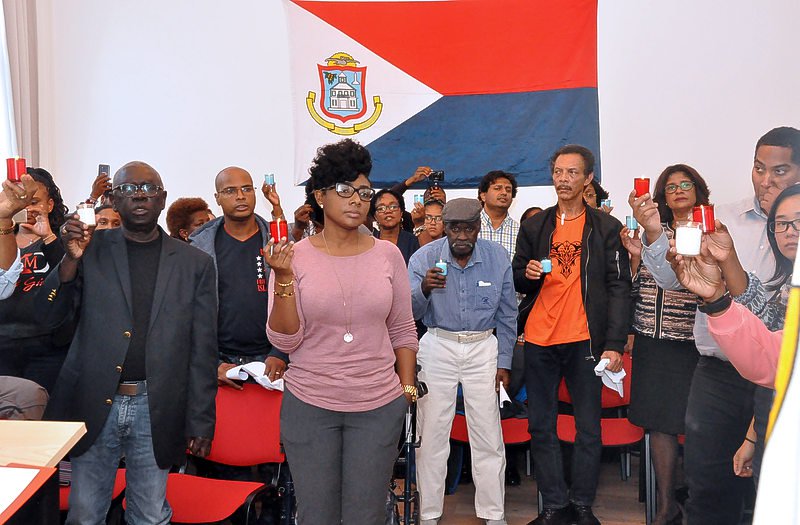 THE HAGUE–More than 300 mainly St. Maarteners came together at the Cabinet of the Minister Plenipotentiary in The Hague on Wednesday for a solidarity gathering. They stood in unity, praying and singing, paying tribute to the people back home and sharing words of encouragement.

When Hurricane Irma struck and devastated St. Maarten, Minister Plenipotentiary Henrietta Doran-York and her cabinet did not hesitate for a moment: a solidarity gathering needed to be organised for the St. Maarten people living in the Netherlands, a group that has been growing steadily over the past few years.

St. Maarteners flocked to the Cabinet with many arriving early for Wednesday’s gathering. Some were lucky enough to secure a seat in the recently renovated sizable meeting room, but the majority stood outside in the hallway and on the large balcony. The original intention was to rent a large tent for the gathering, but this proved impossible due to the high wind that day.

Reverend Keith Lewis of the Methodist Church spoke impressive words of hope and strength, which were answered by many with a loud “amen.” He said that the hurricane didn’t differentiate between people. “The hurricane reminds us of our common humanity. We are not who we are because of our diplomas, our skin colour, our money, our family names. At best we are occupiers of this planet.”

Lewis said the storm was not send to destroy or abandon the people, but to rebuild them. He said that roofs, windows and property could be rebuilt and replaced. “The wind reminded us of who we are, that we are there for each other,” said the reverend, who expressed the hope that everyone would rise together to rebuild St. Maarten “into something even more beautiful.”

Following prayer, the crowd sang several spiritually lifting songs. Candles were shared and lit. Master of ceremonies Kelly Busby mentioned the great anxiety of the people back home during the passing of the hurricane. “Can you imagine how the people called His name? They prayed to the Lord for strength. But no matter how great the devastation, we will bounce back.”

Homage was paid to St. Maarten and the national anthem was sung, after which Minister Plenipotentiary Doran-York addressed the gathering. She said she was very glad to see so many people, and spoke of the immense suffering of the people back home. “Many of our brothers and sisters have lost their roofs and all their belongings in a flash. But what were the common words that you heard? People said ‘We are alive!’”

Doran-York said that she was grateful for the assistance of the Dutch Government, as well as from Curaçao and Aruba. She also thanked all those who have initiated donation and collection drives. “All this support fills us with the feeling that we will recover. Our people are strong and resilient. It will require patience, dedication and hard work, but we will bounce back. We will work side-by-side, shoulder-by-shoulder. Keep supporting each other!”

Edna Illidge moved people to tears when she told her story of her ordeal last week. Illidge, who resides in the Netherlands for many years, was visiting family in St. Maarten and experienced the storm first hand. She spoke about what she went through up until she was able to get on a military plane to the Netherlands. Her words were received with emotional by those present at the St. Maarten House.

The gathering was closed off with snacks and drinks, giving the people the opportunity to mingle and catch up with each other, inquiring about one’s family back home and discussing the urgent situation on their island. The solidarity gathering lasted a good four hours, and many would have liked to stay a while longer.