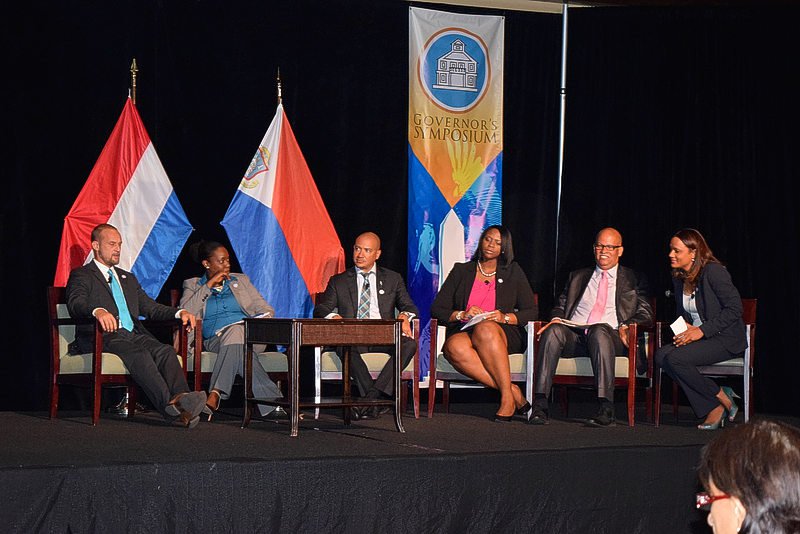 DAWN BEACH–“Why can’t a wealthy country like you do better?” This was the question thrown out by Arnold McIntyre of the International Monetary Fund (IMF) at the fifth annual Governor’s Symposium, themed “Securing National Development,” in The Westin St. Maarten Dawn Beach Resort and Spa on Friday morning.

The question of why can’t a country that is “far more wealthy” than others in the Caribbean not break out of its stagnated growth can be answered in part by the lack of Foreign Direct Investment (FDI) which stands currently at about 2.6 per cent of the gross domestic product (GDP) rate, according to McIntyre, Deputy Division Chief of Caribbean Division I and Western Hemisphere Department for IMF.
St. Maarten has had “several years of stagnant growth,” but it was far better than others in the Caribbean after the 2008 financial meltdown. Growth continues to be about 1.5 per cent of the GDP.
Direct investments from overseas into the country are hampered by “low labour productivity.” This impacts the country’s output and competitiveness.
Public debt is “well below” neighbouring countries. Though, the country has “a very good” debt situation and there is fiscal stability, “risks are increasing,” McIntyre said. Some of those risks are linked to “a lot of money being in the banks,” but the private sector is not taking loans.”
Obstacles to doing business here is also a downside to FDI as is a rigid labour market, high costs of labour and constraints on hiring foreign workers. McIntyre pointed out the recommendation is not to lower wages, but to encourage easier access for investment and new business. For that path, the country must have “a roadmap to setup a business” with all information in one place.
Labour reforms are necessary to impose flexibility and address skill mismatches. The IMF representative proposed the restructuring of public-spending to invest in vocational education and develop targeted training programmes to strengthen skills and improve productivity.
He also urged energy sector reform via the establishment of an independent energy regulatory body to overlook the sector and pursue the adoption of renewable energy alternatives.
St. Maarten has “nothing to fear” from an increasing changing world, said McIntyre. “Proceed with confidence and invest in your people. Don’t lose sight of cooperation regionally … seek to build partnerships, seek common interests. You have a prosperous future, just secure it.”
Bringing change
“National development rooted in culture and education of families, of our people, will grow to blossom and cover our land,” Governor Eugene Holiday said when he opened the fifth annual Governor’s Symposium, themed “Securing National Development,” in The Westin St. Maarten Dawn Beach Resort and Spa on Friday morning.
Holiday issued a call to the invitation-only audience “to further prepare and develop the capacities” of the country’s people “as drivers of national development.”
The country has made “ample national development strides forward,” according to the Governor. Those strides have seen the evolution of St. Maarten people having to leave the shores of the country to seek economic betterment to the situation now with people from all over coming to these shores to find employment, pointed out the Governor.
That evolution has brought “changes to the landscape” that can be translated into “net gains” for the country. He added, however, those net gains do not erase the challenges the country faces.
Ahead of the Symposium, a survey of 260 people, conducted by the organizing committee, rated national development on a scale of one to five (with five being the highest score) at three points or higher. Sharing the statistics, the Governor said 91 per cent rated quality of tourism as three or higher. The same score was given to educational effectiveness by 70 per cent of those surveyed, health care 54 per cent, and attitude on the environment 34 per cent.
The survey found the challenges to securing national development to be high (4.1 points). Topping the list of concerns were crime and corruption.
In his address, Prime Minister William Marlin said his government firmly supports a strategic plan to set out short-, medium- and long-term development priorities. This approach requires the support of all political parties, he said.
Government, said Marlin, has as top priorities to secure national development putting finances in order to achieve fiscal stability, bring about stable government via electoral and constitutional reforms, safeguard the health of the youth, fight crime, diversify the economy “by unleashing the entrepreneurial spirit of the people,” make business easier and market the country as a top tourist destination and provide affordable housing amongst others.
On the road
Fenna Arnell of the Ministry of Public Health and Social Development presented a twist on the popular saying: “Health is wealth.” Flipping the saying, she pointed out the wealth secures health, because everything needed for a healthy life “comes with a price tag.” Tying to the Symposium topic, she noted: “Good health strengthens development and increases productivity.”
Tadzio Bervoets of Nature Foundation informed invitees that biodiversity is crucial to national development. He announced the execution of a baseline inventory of the country’s biodiversity to update info gathered in 1996.
Candia Joseph of Government Accountants Bureau SOAB, giving the business prospective, called on businesses to live up to their tax responsibility: “Tax revenue is needed for national development.”
Ryan Peterson of the Aruba Central Bank urged the public and private sector as the pillars of the country “to find your north star” by creating plans for national development. “No amount of money will solve problems” without a plan or “a consensus.”
The youth perspective on national development and inclusion in the process were demonstrated by a moot class guided by teacher Nicole Maccow. The class represented the one-third of the population who are under age 24.
The Symposium was opened with a rare singing of Het Wilhelmus, the national anthem of the Dutch Kingdom, young singing group Arias, under the guidance of Helen Hart-James. They followed a rendition of the St. Maarten Song.