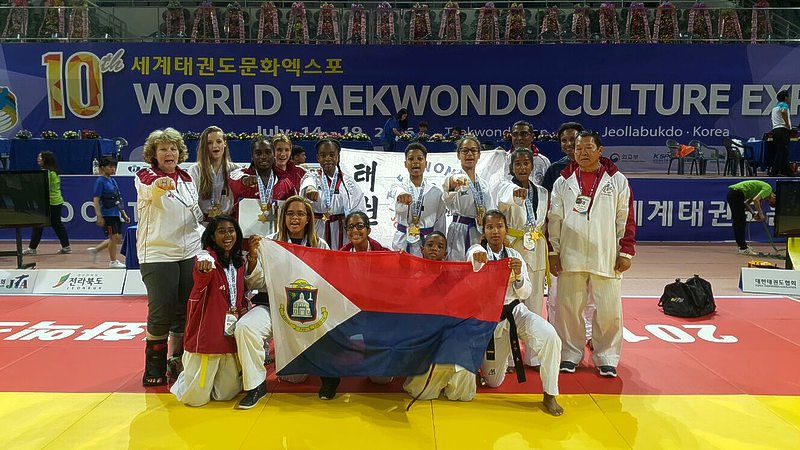 “This was a dream. The journey of a lifetime and a once in a life time opportunity,” exclaimed master Liu.
The nine dan black belt grand master leads teams off island for international competitions several times a year. The team always does good. The group returns with medals and trophies and often is recognized as best international team.
This trip was a bit different. It was longer. Instead of a long weekend the team spent six days at the 10th World Tae Kwon Do Culture Expo in South Korea.
Korea is the birth place of Tae kwon do.
Instead of 100 fighters gathering for sparring, breaking and pattern display, the World competition features 2,300 athletes representing 34 countries including China, Russia, Spain, Australia and Egypt.
“Winning a medal here was hard,” admitted the grand master. Of the 2,300 competitors, nearly 1,000 were from the host country.
Winning Gold medals were Naomi Loor, a gold in sparring and bronze in patterns and Tyrell Pantophlet won gold in patterns and silver in sparring.
Silver medals in sparring went to Surya    Raghosing, who also earned silver in patterns.  Destiny Washington, Marijn Luijcks, Ivyanne Louisa and Mira Raghosing received silver medals in sparring and bronze in patterns.  Lee-Ann Liu earned a silver medal in patterns and bronze in sparring.
Malik Loor, Rani Raghosing and Justin    Wilson received bronze medals in patterns and sparring while
Freya Knaggs won bronze in sparring.
Four adults from the team also competed in patterns. Carlo Talkami, Angela Heyliger and Julian Fleming won silver medals and Paul Djasmin returned to the 37 square mile Island with a bronze medal.
“The opening ceremony was magical,” said Liu.  “Teams from the different countries were presented to the general public and our national flag was flying in the enormous indoor stadium between the other countries.”
Delegation leader and head coach, Liu said, “the competition was tough but the athletes, especially the very young ones did very well.”
He continued, “We have received again a number of invitations from participating countries.”
The delegation, athletes and support staff including two doctors, numbered 23. The support staff included doctors Radha Sanchit and Anand Raghosing,  therapist Paulien Vuijst, coordinators Betty Liu, Charlene Craig and photographer Leopold Gumbs.
In addition to the main event, the competition, the group attended training sessions, seminars and a formal banquet.
The athletes were not the only St. Maarteners receiving accolades.  Grand master Theo Liu was honoured too.  He was invited to train at the Kukkiwon, the Headquarters of the World Taekwondo Federation with the sports’ top practitioners.  He also received a special letter of commendation in recognition of his outstanding contribution to the development and dissemination of Tae kwon do from the President of the Kukkiwon Dr. OH Hyun-Deuk.
The flight home lasted almost as long as the Expo. The delegation had a delay of 7 hours on their return from Seoul, Korea and consequently missed their connection in the Netherlands. They had to stay two extra days for another flight from the Netherlands to St. Maarten.
Helping make the trip possible were sponsors Oriental Caribbean Insurances (OCI), NAGICO N.V., Euro Caribbean Linkup N.V., Seven Seas Waters, Guardian Group N.V., Intermar, The Daily Herald, Robbies Lottery, Soggy Dollar, Avis and Pineapple Pete.