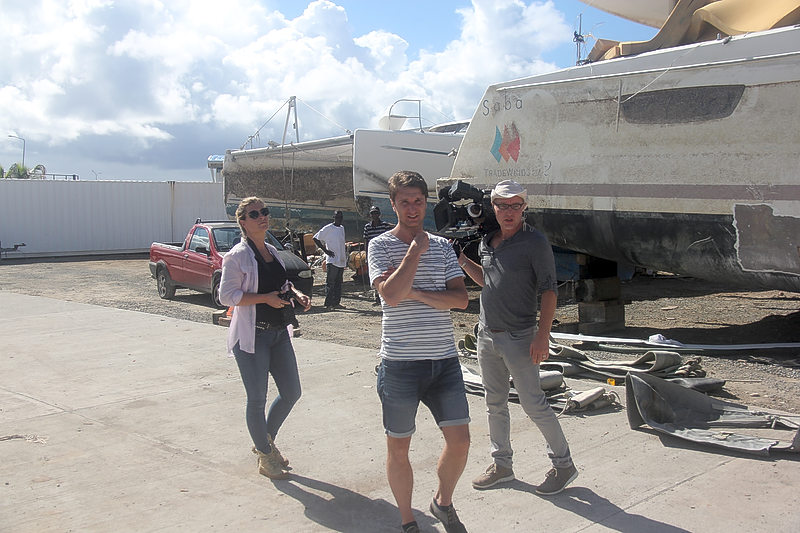 PHILIPSBURG–St. Maarten’s struggles after Hurricane Irma struck the island on September 6 will be prominently featured in Dutch current affairs television programme Brandpunt. The forty-minute show will be aired by broadcaster KRO-NCRV on the NPO2 network in the Netherlands Monday, December 12, at 8:25pm, or 3:25pm local time.

Brandpunt anchor Sacha de Boer, reporter Justus Cooiman and cameraman Clemens van Elsäcker spent three days in St. Maarten from Thursday through Saturday filming at different locations and speaking with a host of people about their experiences and about the impact the devastating hurricane had on their lives.
Dutch viewers may remember De Boer as newscaster of the NOS Journaal between 2003 and 2013. Since then she launched a career in photography, but returned to the TV-screen in 2016 as an anchor for Brandpunt.
The 40-minute TV show featuring St. Maarten will be aired exactly 97 days after Irma made landfall, focusing on the resilience of St. Maarteners and their intention to rebuild their island.
The Brandpunt reporters filmed St. Maarten resident Dieudonnee Ostiana who was in the Netherlands attending her brother’s wedding when Irma struck. They followed her upon her return.
“She did not know if her house was still standing and if she still had a job. She worked as an actor-victim for medical students and worked in a nightclub. She lost both jobs, but her house was not severely damaged. She is the red thread in our programme,” Cooiman explained, while De Boer and her cameraman are taking shots of the salvaging of boats at Simpson Bay lagoon on Saturday morning.
Ostiana’s quest in looking for a new job and cleaning her house will be showing the human-interest side of the story. Besides that, the TV show will be focusing on the severe impact the violence of nature had on the tourism sector, the insurance companies and on the island’s children.
The Brandpunt crew spoke with hotel and insurance-company representatives, filmed at Sister Regina primary school how children are dealing with post-Irma traumas, and caught shipwrecks at Simpson Bay Lagoon and the distribution of food vouchers in the districts on camera.
They also shot some footage outside Sonesta Maho Beach Resort and Casino on Saturday, but did not obtain management’s permission to enter the premises.
Cooiman also visited St. Maarten in October. “Recovery will take years,” he said. “But things have improved since the hurricane struck two months ago. Boats are being salvaged, the fencing around the airport is being put back up and a lot of debris has been cleared away. There are rays of hope, but also lots of drama still,” he said.
Even though Brandpunt will not be focusing on politics, Cooiman said the “games and the fuss” about the reconstruction funds were “saddening.”
Brandpunt is not the only Dutch TV-show to feature St. Maarten in Irma’s aftermath. Filmed and directed by Gertjan Zwanikken VPRO’s Zembla will be screening “Disaster in the Kingdom” on NPO2 today, Monday, at 8:55pm in the Netherlands, or 3:55pm in St. Maarten.