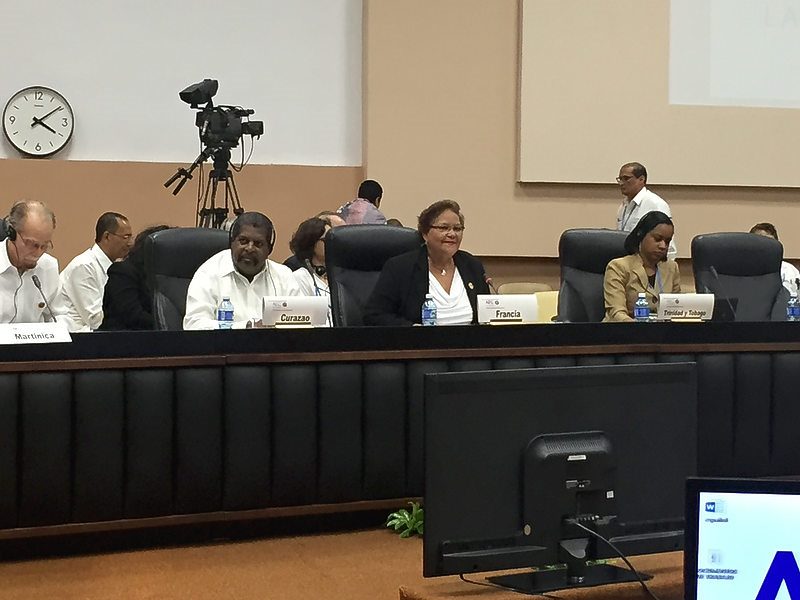 MARIGOT–President of the Collectivité Aline Hanson is in Cuba for the seventh annual summit of the Association of Caribbean States (ACS) being held in Havana June 2-4.

The St. Martin delegation presented St. Martin’s application to become an ACS associate member to be considered by the Council of Ministers. It was accepted later on Friday.
The process of integration as an associate member is expected to be finalised today, Saturday, in the French Embassy in Cuba in the presence of ACS Secretary-General Alphonso Múnera.
Múnera paid a visit to President Hanson on April 6, 2016, in connection with this application.
President Hanson was welcomed to Cuba by Justice Minister Maria-Esther Reus at José Marti International Airport on Tuesday.
Member states have been discussing cooperation and common objectives. The summit was opened on Thursday by Múnera, who presented his report of ACS’ management as head of the Secretariat since April 2012.
An exchange on the proposals concerning the follow-up to the revitalisation work to ACS was organised in the afternoon, during which the Secretary-General presented the roadmap of work that will receive special funding.
The ACS is an organisation of cooperation, consultation and action coordinated between the member and associated states in the areas of trade, transport, sustainable tourism and natural disasters in the greater Caribbean. It is currently composed of 25 member countries and 8 associate member countries.
Member states are: Antigua and Barbuda, the Bahamas, Barbados, Belize, Colombia, Costa Rica, Cuba, Dominica, Dominican Republic, El Salvador, Grenada, Guatemala, Guyana, Haiti, Honduras, Mexico, Jamaica, Nicaragua, Panama, Saint Kitts and Nevis, Saint Lucia, Saint Vincent and the Grenadines, Suriname, Trinidad and Tobago and Venezuela.
Associate members are: Aruba, Curaçao, France (on behalf of French Guiana and Saint-Barthélemy), Saint-Martin, Guadeloupe, Martinique, the Netherlands (on behalf of Bonaire, Saba, St. Eustatius) and St. Maarten.