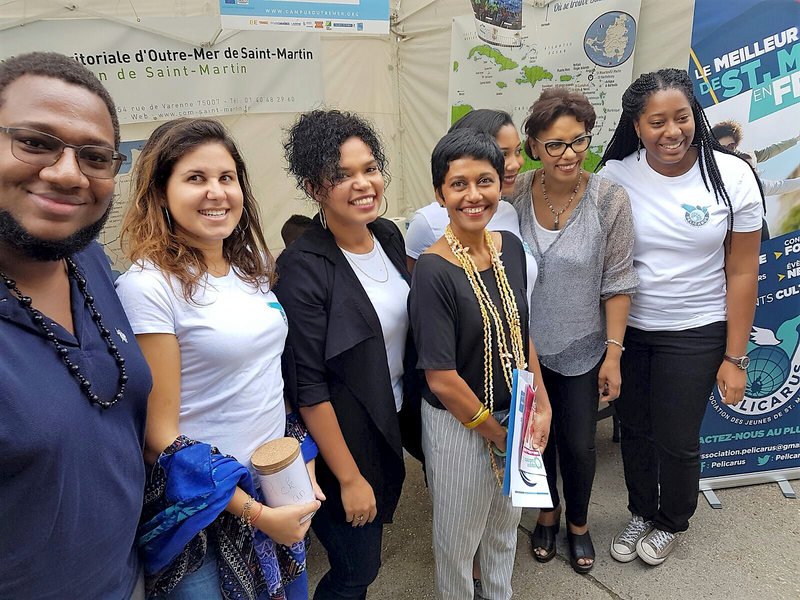 MARIGOT–A Paris-based St. Martin student, Philippe Phillidor, has been awarded the 500-euro Three Oceans Prize for his outstanding academic career during the second edition of the Overseas Campus, organised by the Ministry of Overseas Territories on September 3.
Some 3,000 students studying overseas were invited by newly-installed Overseas Minister Ericka Bareigts, to take part in the Campus, held in the gardens of the Ministry at Rue Oudinot, Paris.

St. Martin featured prominently at the Campus with the participation of the Pélicarus Association and Maison de St. Martin; both organisations are based in Paris and have the common objective of providing logistical aid for St. Martin students studying in France for the first time. There were many exchanges and requests for information.
Philippe Phillidor is a law school graduate of the Sorbonne, who also graduated with a Master’s Degree in Finance from the prestigious Sciences Po University. He is currently a Counsel to the Bar School in Paris. According to the Collectivité, his exemplary academic success and perseverance impressed the jury. He received the prize from Minister Ericka Bareigts, who congratulated him warmly.
It is not the first time a St. Martin student has been recognised with this prize. In 2015, it was the turn of St. Martiner, Fosta Lalanne, a Sciences Po graduate.
“The Collectivité would like to congratulate these deserving students, who brilliantly represented the territory and whose chosen paths are an inspiration to other students in St. Martin,” the Collectivité stated in its release.
The Campus offered around a dozen conferences and workshops for the benefit of the students. Among these was one on marketing and selling oneself, international mobility, compiling a Curriculum Vitae, and writing a letter of motivation.
Two speakers from St. Martin assisted at the conferences. Psychologist and Pélicarus Toulouse member Chantal Hyman gave a talk on the theme of well-being, giving practical tips on learning during the first year of study.
The other speaker, fashion designer Milkaya Laïja, originally from French Quarter, talked to the students about learning the fashion business and her experience working in Paris. She graduated in styling and fashion in 2007 from École Supérieure des Arts et Techniques de la Mode in Paris.