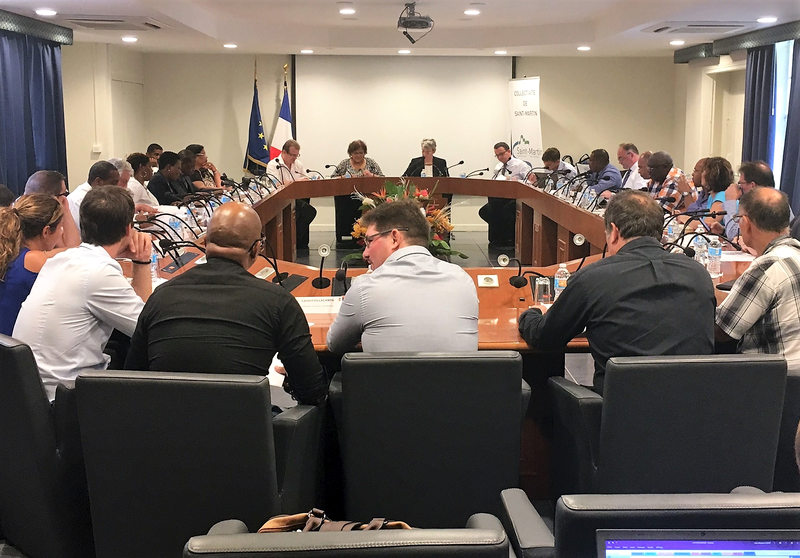 MARIGOT–Meetings were held in Hotel de la Collectivité on Tuesday in connection with the implementation of super-fast broadband or Trés Haut Débit (THD) on the entire territory of St. Martin by 2022 as per the aim of the French Government to have all territories covered (www.francethd.fr).

As part of the plan to deploy superfast broadband in St. Martin, a visit was made by Director of the Digital Agency Antoine Darodes, representative of the Secretariat of State for Digital Services and Innovation Pierre-François Griffiths, the rapporteur for the Broadband Mission in the overseas territories. They were in St. Martin and St. Barths Monday and Tuesday.

It was noted by the end of 2016, 50 per cent of the population had already benefitted from the upgrade, a year ahead of schedule. In addition to the major economic and social advantages of the new digital economy, THD will also open up and connect remote areas of major cities by giving them the opportunity to participate on the same level in new forms of citizenship.

Under this plan, the Collectivité of St. Martin voted on June 25, 2015, for a Schéma Directeur Territorial d’Aménagement Numérique (SDTAN). The Collectivité also filed a request for support from the State for deployment of fibre optic cable for all St. Martiners by 2022.

On Tuesday, a first meeting was held at 10:00am with the elected representatives of the Collectivité during which two national representatives provided an update on the progress of the planned France high speed broadband. Elected officials present included President Aline Hanson, Vice President Rosette Gumbs-Lake, and Territorial Councillors Jean-David Richardson, Jean-René Duret, Rollande Questel and Jeanne Rogers-Vanterpool.

At 11:00 President Hanson chaired a second meeting with representatives of the local operators Orange, Digicel, UTS Telecom, Dauphin Telecom, St. Martin Cable TV, Mediaserv, and THT Tel, the aim being to share exchanges on the progress of the plan to deploy super-fast broadband in St. Martin. Antoine Darodes gave his take on this point and private operators also discussed their investment projects.

Vice President Guillaume Arnell held the first meeting with local operators on this subject on October 11, 2016. Director of Digital and Audiovisual Services for the Collectivité, Jean-Pierre Razin hosted both meetings and has been involved with the super-fast broadband plan for St. Martin from the start.