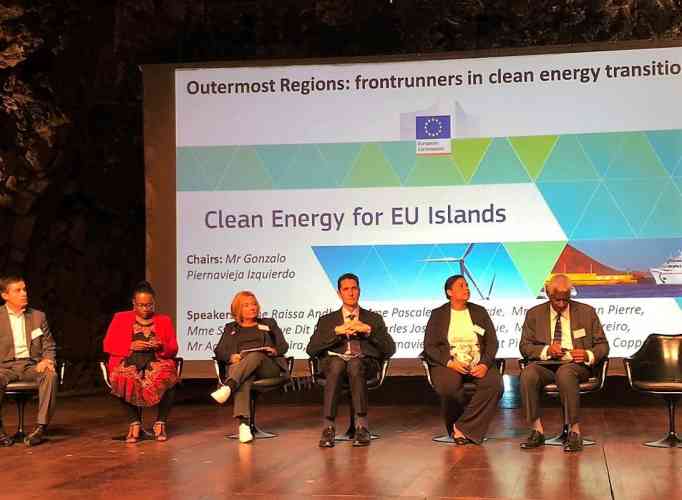 Territorial Councillor Pascale Alix-Laborde (third from left) sits with other delegates at the 2nd Clean Energy Forum in Lanzarote.

MARIGOT–Vice President in charge of sustainable development Steven Patrick and Territorial Councillor in charge of the environment Pascale Alix-Laborde recently represented the Collectivité of St. Martin at the second Clean Energy Forum for European Islands in Lanzarote.

Organised by the Clean Energy Secretariat for the islands, in partnership with the European Commission and the Canary Islands Government, the Forum is part of the Clean Energy for European Islands Initiative. It brought together all public and private actors in the sector, as well as the political representatives of the islands and the Director General of the European Commission on energy Dominique Ristori.

The May 2017 Political Declaration signed in Malta between the European Commission and 14 European Union (EU) member states, including France, launched this initiative as part of the “Clean Energy for All Europeans” package.

Starting from the observation that islands have important assets but also challenges in terms of energy transition, the initiative aims to provide a framework to support European islands in this transition, in particular through the establishment of a Secretariat.

During the Forum, a workshop specifically dedicated to the Outermost Regions (ORs) enabled them to discuss their energy ambitions for 2020 and beyond, their future projects (wind, electric cars, geothermal, solar and many others) and the initiatives already implemented in the field. ORs reaffirmed their commitment to promote the development of clean energy sources by taking a leading role in the Clean Energy for Islands Initiative.

In her speech, Territorial Councillor Alix-Laborde presented the context and prospects of the Collectivité of St. Martin in terms of sustainable energy, recalling the importance of making a climate policy to deal with the harmful effects of climate change, thus implying having an ambitious and innovative energy policy that combines accessibility, particularly tariffs, energy autonomy and security of supply.

With its ambition to become a model in terms of clean energy like other ORs, the Collectivité of St. Martin presented several projects, including the installation by 2020 of a photovoltaic plant producing 7260 megawatts (MW) per year, representing an annual consumption of 10 per cent of the population and the project for geothermal interconnection between the Leeward islands led by St. Martin as part of the European Interreg-Caraibes programme; a project that provides for the initiation of feasibility studies at this stage.

Other measures envisaged were also mentioned, such as replacing community service vehicles with electric vehicles, the use of electric cars through free terminals and the creation of eco-neighbourhoods in partnership with residents for the implementation of good practices on land, water, transport and energy management.

“This intervention was also an opportunity to thank the EU for its support and to remind it of the need to provide specific provisions for the ORs with dedicated funding to support these regions in the development of new energies,” the Collectivité stated. “Attendees visited a desalination plant that also produces clean energy. This forum, which will be renewed, made it possible to strengthen the visibility of the ORs and to network with potential partners.”