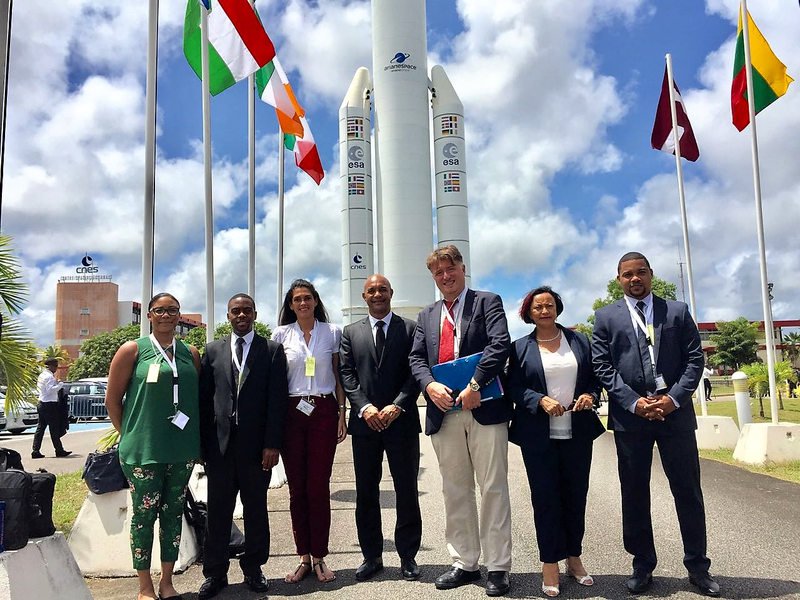 MARIGOT–President of the Collectivité Daniel Gibbs in a more detailed account of his recent attendance at the 22nd Ultra Peripheral Regions RUP President’s Conference in French Guiana revealed on Tuesday St. Martin should receive a total envelope of 140 million euros from the European Union (EU) not only for reconstruction, but “for the months and years to come,” as a result of his meeting with European Commissioner Corina Crétu, responsible for regional policy.

Some 80 million euros of that sum will be channelled directly into accelerating reconstruction while the balance will come from various European funding agencies.
It was already mentioned that the Région of Guadeloupe, the managing authority for the INTERREG Caribbean programme, will divert 10 million euros to reconstruction of St. Martin out of its own programme.
In addition to that the 10 million euros for the shelved Cooperation Project between St. Martin and St. Maarten is still available and those funds will also be channelled into reconstruction, according to Gibbs.
It was not clear whether the three parts to that project, one of which is the joint waste water treatment plant in Cole Bay, would proceed or whether they are part of the reconstruction.
Europe contributes 95 per cent of those funds, up from 85 per cent previously with the State and Collectivité making up the five per cent balance.
A delegation from the European Commission will be here on November 7 for technical meetings on this European funding programme while Gibbs himself will be going to Brussels to continue the dialogue.
He said he was “very reassured and confident” that St. Martin will receive this funding based on the reception and support he received in the meetings. Sensing the departmental delays in Paris, he admitted the objective of attending the conference was partly to seek the support of the EU to obtain the maximum amount of European funding for the reconstruction of St. Martin.
“I had the opportunity to present a precise mapping of the economic and social situation of our territory after the passage of Irma, during the internal President’s session, but also during the partnership session, during which I directly addressed the highest authorities of the State and the European Commission.
“With this money, we need to introduce major reconstruction projects, especially with regard to the structural catch-up, by building new infrastructure needs: water and sanitation, road networks, reconstruction of schools and some public buildings.
“Our sports facilities have been completely devastated and the territorial media library suffered enormously. We need to rebuild quickly and better. It was therefore a crucial conference for us. It was a constructive but also productive move to be there since we received unanimous support from our overseas and European partners.”
The Overseas Ministry has to submit its file dealing exclusively with the damage caused by Hurricane Irma in St. Martin, estimated at 2.5 Billion euros, by the end of November 2017.
“I reminded President of the European Commission Jean-Claude Juncker and Commissioner Crétu that it is essential to separate the two hurricanes Irma and Maria that were 12 days apart. We had two natural disasters and they need to be treated separately. I will be particularly vigilant on this point.”
Gibbs also talked about funding available from the European Investment Bank (EIB) whose Vice-President he met in Cayenne and will see again in Luxembourg to propose projects.
“EIB provides the possibility of long-term (25 years) and very preferential loans (1.5%) for the renewal of water systems and sanitation, where needs are important, since to this day, some 20 per cent of the population still doesn’t always have access to water, not to mention the effect of obsolete networks.
“A fund of 150M euros is available for the years 2017, 2018 and 2019 and then you have guarantees and support for private investment projects and for me what comes to mind is the renovation of the waterfront. And technical assistance can be provided to identify eligible projects in the recently set up European Council Platform.
“I think of water and sanitation networks and the necessary development of our port infrastructure. I think finally of the sector which is vital to us: the hotel and catering industry and shops for a sustainable reconstruction suited to the climate and environment.”
The President’s last meeting on October 26 was with President of the Republic Emmanuel Macron during which he presented the Phoenix economic stimulus plan.
“I especially mentioned to him the need to attract private investors to St. Martin through a proactive and attractive economic policy. On this theme, I presented our Grand Marigot project which will be eligible for EIB financing.”
On a final note Gibbs disclosed he had the honour to accept the Presidency of the 24th RUP Presidents Conference to be held between November 2018 and November 2019 in St. Martin.
President Gibbs was accompanied in French Guiana by Director of General Services (DGS) Philippe Mouchard, Director of Contractual Politics Rodrigue Angely, Chargée de Mission for European Relations Rudya Lake and Omar Morales, Chargé de Mission for Exterior Relations and Cooperation.